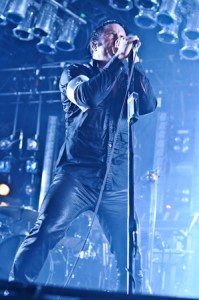 NIN are never a letdown live and this is the first tour that unleashed a special drumming force known as ILAN RUBIN.  ILAN is from LOSTPROPHETS and is NIN live drummer for this tour and I have to tell you what a performer.  He is a powerhouse drummer with flare and hair to match.  What an incredible talent to add to NIN.  The light show was not as intense as their LIGHTS IN THE SKY tour but more practical for the NINJA tour.  The NIN LIGHTS IN THE SKY tour took light shows to a new meaning with interactive touch screen technology that I can not even come to describe.  TRENT REZNOR has cornered the market in fog production.  TRENT is newly engaged and under enraged.  It was nice to see a softer side of him as he actually spoke to the audience more than just a few profanities.  He has always been a pioneer and he can take credit on pretty much everything electronic.  When you think of innovative industrial music only one name comes to mind, TRENT REZNOR.  NIN just gives back in every aspect of their live performance and I will always support them recommend them to all.