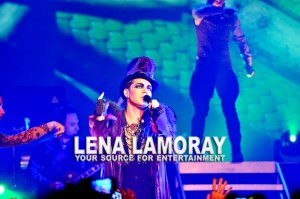 ADAM LAMBERT dazzled Providence when he brought his sold out GLAM NATION TOUR to Lupo’s. Adam is a rare breed of mind-blowing talent that stretches beyond what is even humanly possible. The man has put the E back in Entertainment and I want to thank him for that. I have not waited in line at this venue since the early years of MARILYN MANSON back in the late 1990’s. The line was so long that I’m pretty sure it started in another city. Was it worth it? HELL YEAH!! Adam Lambert is the Dark Glittery Knight that the music industry so desperately needed to help kick mundane to the curb. He is so fresh, beautiful and did I mention he can sing, no really he can sing! What a voice! I remember the first time I heard him sing on AMERICAN IDOL, I turned into Gus and Shawn (Dule Hill, James Roday) from PSYCH and gave him a “whaaaat”. Adam wins hands down at being my favorite contestant of all time!

While I was in line Adam appeared at the side door of the venue and people jumped the fence and ran screaming after him and the girl next to me began to cry. Someone even passed out! I have never witnessed that in my life. I didn’t mention that I got a chance to interview Adam at the start of the tour because I’m pretty sure the boys and girls around me would have consumed my phone since his voice came through there once. He has a pretty committed fan base and I certainly understand why. You don’t often come across such a perfectly put together package of superb vocal ability and stage domination. Adam is so comfortable in his own skin that he just radiates on-stage even when he is drinking out of a “douche bag cup” as he described his stage drink receptacle.

The venue was packed and really hot and luckily a really nice gentleman let me stand next to him at the soundboard so I could get a few photos of the show and be close enough to see so I could offer my review of the show. I loved every minute of the show. This is what every show should be like but I know there is only one Adam Lambert and we should all be thankful that he is sharing his perfected art with us. Adam featured an arena stage show on a small stage with such incredible lighting. There were lasers of every color beamed over the crowd. Every detail of the show was so well thought out and obtained maximum results in a limited space.

And so it began with the man and a little “Voodoo” and he was dressed to the nines with his signature A top hot adorned with feathers. The scenery was a beautiful moonlit midnight sky. We fell “Down the Rabbit Hole” and were seduced into a “Ring of Fire”. Adam treated us to some endearing moments with his bass player. It’s hard to pick out a few choice songs but I did really love the sexified live performance of “Fever”. “Music Again” was clever and “Sleepwalker” was beautifully brilliant. “Strut” made the crowd dance the most and of course the crowd favorite, “Whataya Want From Me” stole the show. His dancers were worked into the show at all the proper moments. He featured a very exquisite “Day of the Dead” theme. Adam’s band was fantastic and Monte Pittman (Madonna, Prong) was sensational. Tommy Joe Ratliff was on the bass and the target of Adam’s playfulness and Longineu Parsons III (Yellowcard) handled the drumming duties. ALLISON IRAHETA opened the show and boy has she grown as an artist since “American Idol”. She was very energetic and she sounded great. Her hair is as colorful as her personality.

Seeing the artistically endowed Adam Lambert live is like an adrenaline shot of awesomeness applied directly to your soul. I can’t stress how much I enjoyed this show and how amazing Adam is live and all the emotion and vulnerability that he exhibits throughout the show is noteworthy on its own. I highly recommend that you go and see the GLAM NATION TOUR!! Buy your tickets early because the shows sell out in record time and trust me you do NOT want to miss this tour. http://www.adamofficial.com