Shailene Woodley
The Descendants
Directed by Alexander Payne
In her first ever feature film, Shailene Woodley commands as Alex, an independent, opinionated teenager supporting her father during a difficult time.

Jennifer Lawrence
The Hunger Games
Directed by Gary Ross
With a strong will and a quick bow, Jennifer Lawrence embodies the courage of District 12 tribute Katniss Everdeen.

The Black Keys “Gold on the Ceiling” (feat Johnny Depp)

Known for character roles spanning from the beloved misfit in ‘Edward Scissorhands’ to the killer barber ‘Sweeney Todd’ and everyone’s favorite swashbuckler, Captain Jack Sparrow, we can always count on Depp to keep us entertained.

Directed by David Yates
From fighting the Dark Lord to finding love, the wizarding cast of Harry Potter brings their story to a heartfelt close in Deathly Hallows: Part 2.

Directed by David Yates
In the timeless battle of good versus evil, Harry Potter remains shrewd and loyal until the bitter end, destroying Voldemort’s final horcrux with the grace and strength of a gifted wand-whipping warrior.

Directed by Gary Ross
Elizabeth Banks’ metamorphosis into a high strung, pink haired villain renders her almost unrecognizable as she escorts polished Tributes to their death.

The inaugural prize is being presented to the Zombie-slaying, ‘Superbad’-ass comedienne Emma Stone, who isn’t just blazing a trail, she’s leaving a footprint.

MOVIE OF THE YEAR WINNER

Directed by Bill Condon
Wedding bells ring for Bella and Edward, but after a steamy honeymoon the happy couple find that they’re expecting a bundle of joy that isn’t quite of this world. 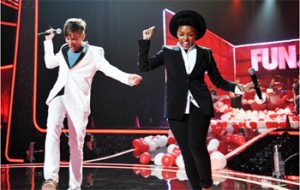 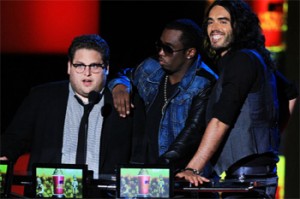