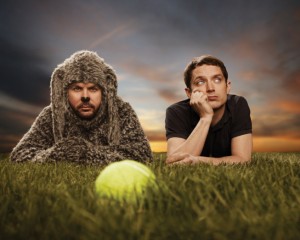 Season 2 of Wilfred Premieres with an All-New Episode on June 28 at Its Regular Time Period of Thursdays at 10:00 PM E/P

LOS ANGELES, June 7, 2012 – Taking a page out of its sister network FOX’s playbook for Glee and New Girl, FX will offer viewers a Special Preview Episode of its hit comedy series Wilfred for viewing across multiple platforms over a two-week period beginning on Thursday, June 14 in advance of the series’ official season two premiere launch on Thursday, June 28.

On Thursday, June 14, the never-before-seen Special Preview Episode will roll out on Video-on-Demand through the network’s cable, satellite and telco distribution partners, and also will begin running that day online on HULU and Yahoo! TV, as well as FXnetworks.com and the Wilfred Facebook page. The final exhibition will be on FX on Thursday, June 21 at 10:30 PM E/P.  In the Special Preview Episode, “Progress,” which features guest star Robin Williams, “Ryan” (Elijah Wood) realizes the consequences of not having “Wilfred” (Jason Gann) in his life (Written by David Zuckerman; Directed by Randall Einhorn).  The Special Preview Episode will be preceded by an encore run of Wilfred’s Season 1finale at 10:00 PM E/P.

Then on June 28, Wilfred moves to its regularly scheduled time period of Thursdays at 10:00 PM with its official Season 2 premiere and the all-new episode, “Letting Go.”  In the episode, Wilfred refuses to help Ryan with his problems as a result of his belief that their relationship is one-sided due to Ryan’s selfishness (Written by Reed Agnew & Eli Jorné; Directed by Randall Einhorn).

“We’ve seen the success FOX had previewing Glee and New Girl with this type of initiative and we felt this was a perfect opportunity to execute a similar strategy for Wilfred,” said FX President and General Manager John Landgraf. “Wilfred enjoyed the most successful first season of any comedy ever on FX and the time is right to capitalize on that success and hopefully grow our audience. This is a special treat for fans of the show to get a jump start ahead of the season two premiere.”

In addition to the exposure of the Special Preview Episode, the complete first season of Wilfred will be available on VOD on June 14 and is available on DVD and Blu-ray on Tuesday, June 19.

Wilfred is a half-hour, live-action comedy about Ryan (Wood), a young man struggling unsuccessfully to make his way in the world until he forms a unique friendship with Wilfred (Gann) his neighbor’s canine pet.  While everyone else sees Wilfred as just a dog, Ryan sees a crude and somewhat surly, yet irrepressibly brave and honest Australian bloke in a cheap dog suit. While leading him through a series of comedic and existential adventures, Wilfred the dog shows Ryan the man how to overcome his fears and joyfully embrace the unpredictability and insanity of the world around him. The series co-stars Fiona Gubelmann and Dorian Brown. Wilfred is based on the critically-acclaimed Australian series of the same title and was adapted for FX by David Zuckerman (Family Guy, American Dad, King of the Hill). Zuckerman also serves as executive producer along with Jason Gann, Rich Frank and Jeff Kwatinetz of Prospect Park, Randall Einhorn, and Joe Connor and Ken Connor of Renegade, producers of the Australian version of the series. Einhorn also serves as director. Wilfred is produced by FX Productions. The Australian version of Wilfred was written by Jason Gann and Adam Zwar, directed by Tony Rogers and produced by Jen Livingston.

Thursday, June 28 marks FX’s biggest night of comedy ever with the launch of two new and two returning comedy series. The night kicks off with two episodes of the new comedy Anger Management, starring Charlie Sheen at 9:00 and 9:30 PM E/P, followed byWilfred at 10:00 PM, the award-winning Louie at 10:30 PM, and the new latenight series Brand X with Russell Brand at 11:00 PM E/P.