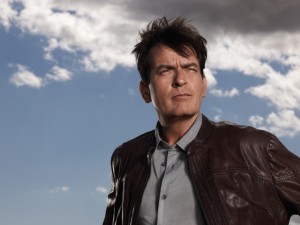 Charlie Sheen returns to series television as Charlie Goodson, a therapist specializing in anger management, in Anger Management on FX.  FX is airing two episodes on June 28, beginning at 9 EST. The show stars the beautiful Selma Blair (Hellboy) as Kate Wales, Charlie’s best friend, therapist, and therapist with benefits.  Shawnee Smith (Becker, Saw, The Blob) also stars as Jennifer Goodson, Charlie’s ex-wife and mother of his daughter Sam (Daniela Bobadilla).  Brian Austin Green guest-stars in the first episode as Shawn. The show doesn’t waste any time politely ribbing on Charlie Sheen’s former employer, in fact it opens with it.  I guess it was best to unleash the elephant in the room the moment the cameras were turned on.  Love him or hate him, Charlie Sheen is always Charlie Sheen, and he doesn’t apologize for being the wild card.  He certainly doesn’t hide what he does, he’s honest, brutally honest, and sometimes the truth hurts.   He is always the captain of his own ship and sometimes, okay, most of the time, he will ride that ship to the bottom of the ocean.  Everyone loves to watch a wreck and Charlie embraced that and took it on tour.  He obviously realized that he wasn’t “winning” and decided to get his head back in the game, pick up the pieces, and give this television thing another shot. 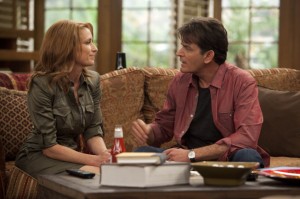 If you were a fan of Charlie Harper in Two and a Half Men then I can pretty much guarantee that you will like Charlie Goodson in Anger Management.  It certainly isn’t the same show but the rhythm is somewhat similar.  I will say that it isn’t a typical FX show.  I’m sure its early (for an FX show) timeslot poses challenges but I really wanted the show to just go for it.  Due to all the promos, I didn’t think the show was going to be a tame as it is.  I’m not saying it is a bad show; it just isn’t what I expected. Some shows begin like that and when they find their footing, they become amazing shows.  I really believe this will be one of those shows.

The show begins by introducing us to one of Charlie’s therapy groups that he is counseling at his house.   Patrick (Michael Arden) [Off the Map, GCB, The Good Wife] tells us his exciting story involving sparklers.  Ed (Barry Corbin) [The Closer, Modern Family] is an interesting fellow that I predict is going to be broke by the end of the show.  Lacey (Noureen DeWulf) [Outsourced, Hawthorn] really, really needs anger management.  She has an itchy trigger finger.  Nolan (Derek Richardson) [American Horror Story] is unlike the others because his anger issue is that he has no anger.  He just goes along with everything.  Charlie’s counseling of them leads us into why he became an anger management therapist.  He shows the group the video of his rage causing his career-ending injury.

Kate and Charlie don’t take long to show off their special friendship.  It starts off fun but quickly turns “unethical.”  On a side note, I love Kate’s zipper skirt.  The costume designer deserves some points for Selma Blair’s wardrobe. 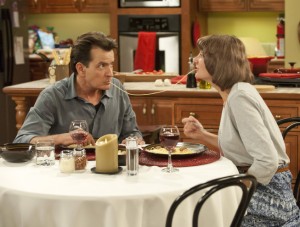 Charlie’s daughter, Sam, comes home from school and Charlie notices that she is stressed.  Sam passes along some stats that she learned from Shawn, her mom’s boyfriend.  Charlie goes to his ex-wife’s house to talk to her about Shawn (Brian Austin Green).  They learn an important “two number” lesson.

Some other characters that I hope we see more of:  Brett Butler stars as Bret, Charlie’s friend and favorite bartender.  Michael Boatman stars as Michael, Charlie’s neighbor and friend.  James Black plays Cleo, a prisoner that attends Charlie’s anger management group in prison.  Charlie also runs a therapy group in prison that helps the prisoners deal with their anger issues.  Darius McCrary plays Donovan, a prisoner that is in a romantic relationship with Cleo.

Reno 911’s Kerri Kenney guest-stars as Mel, a new member of the group with so much more to offer Charlie.  Her character is a trip.  She forces Charlie into a new room of his house, the kitchen.

If you miss your weekly dose of Charlie Sheen don’t worry because FX has you covered.  Anger Management begins Thursday, June 28 only on FX. 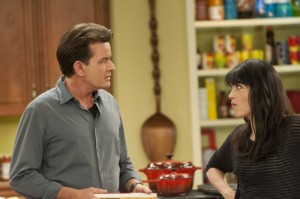