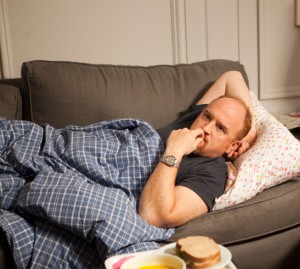 The first five minutes of the season three premiere of Louie will forever change your view on vision correction.  Get ready to not see clearly, for a bit, because tears will be streaming down your face.  I can’t remember the last time I laughed that much.  Season three starts out in style, Thursday night on FX, with “Something is Wrong” – Louie has a challenging day.  Written and directed by Louis C.K.

Louis C.K. is one of the most ingenious people of our time.  He decided to experiment with his latest comedy release and offer it to his fans via his own website rather than line the pockets of the mainstream media outlets. He released his art, on his own terms, and kept it affordable for everyone.  It was a huge success that benefited everyone, including the numerous charities that Louis C.K. donated portions of his earnings to.  Louis C.K.’s experiment led him to initiate a platform that other comedians would soon follow.  Louis C.K., being the innovator that he is, took his idea a step further and is now offering tickets to his live shows on his website at face value.  There are no extra fees added.  Louis C.K. truly loves his fans, and his fans return the love by making sure that all of his shows sell out.  Louis C.K. has just added several more dates, to the original itinerary, in order to meet the demand of his proud supporters. 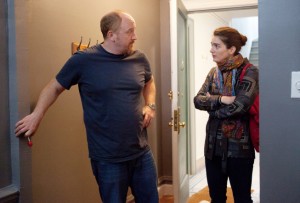 As I stated earlier, you are going to be in tears when you watch the opening sequence of the premiere.  It’s Louie doing his standup bit and he makes some comparisons to Yankee Stadium that I know you have never heard before.  I love how he is not afraid to just go for it and say exactly what is on his mind.  He’s fearless and I respect him for it.

Poor Louie can’t even enjoy a delicious bowl of ice cream without being picked on for it.  I don’t understand the women in Louie’s life and I’m a woman.  He always seems to attract the difficult types that confuse the hell out of him.  April is too busy analyzing him that she misses the big picture.

Have you ever looked at a street sign and wondered, “What the hell does that mean?”  We’ve all been there.  Keep this episode in mind the next time you are in that situation.  Another tearful moment provided by the season premiere.  Have I mentioned how much I love this show?

Sons of Anarchy fans, Louie is “trying” to win you over.  He decides to try something new and it doesn’t quite work out in his favor, but it does provide an exhilarating soundtrack. Everyone, and I really mean everyone, lets him know about it.  The fantastic thing is that we finally get to meet his ex-wife, Janet.  She is compassionate and caring and offers her support with a brief little sentence, “Good luck with that.”  That phrase can be thrown around in any situation.  Depending on how you say it, it can get your point across appropriately.  That being said, I was happy to finally meet his wife.  I hope we see more of her throughout the season.

Having seen the first five episodes of the season, I can honestly tell you that you will not be disappointed.  One of my favorite episodes guest stars Melisa Leo (The Fighter).  Jerry Seinfeld will also be appearing, later in the season, in what Louis C.K. teased as a “very different” guest role.  I can’t wait to see what Louie has in store for us.