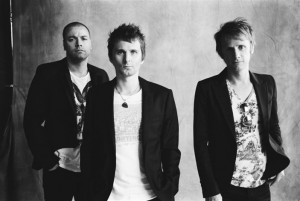 LOS ANGELES, JUNE 27, 2012 – Muse’s brand new song “Survival” has been adopted as the official song of the 2012 Olympic Games that will take place in London this summer. The track will make its radio premiere tonight and be available in iTunes around the world shortly thereafter.

“Survival” will be played throughout the sporting sessions in all London 2012 venues during the entire Games, when athletes enter the stadium, the lead up to the medal ceremonies and it will be made available for international broadcasters of the Olympic Ceremonies to use in their broadcasts.

The band appeared at the official London 2012 press conference today, launching the “Rock The Games” music program, which “Survival” is spearheading.

“It’s a huge honor to have the track chosen as such a major part of the London 2012 Olympic Games,” said Muse’s Matt Bellamy. I wrote it with the Games in mind as it expresses a sense of conviction and determination to win.”

Muse is Matt Bellamy, Dominic Howard and Chris Wolstenholme. Since forming in 1994, they have released five studio albums selling upwards of 15 million albums worldwide. The group’s last album “The Resistance” reached Number 1 in 19 countries around the world, and they have won numerous awards around the world including a Best Rock Album Grammy Award and an American Music Award for “The Resistance.” Muse will release their new studio album “THE 2ND LAW’ in September and will tour the world in support of it.