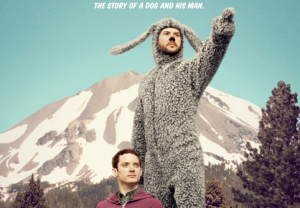 Wilfred tempted you with “Progress” last week, but progress is overrated, or is it?  Ryan will just have to “keep digging.”  The official season two premiere kicks off Thursday night, right after Anger Management and before Louie on FX.  Jason Gann sexily slips on his trademark dog suit, at least that is how I imagine he does it because he is Australian after all, and then fun begins.  Elijah Wood puts so much heart into Ryan that I have to question where his award is?  He won me over in Green Street Hooligans with Sons of Anarchy star, Charlie Hunnam.  Check that film out if you haven’t seen it.  Elijah and Charlie are beyond extraordinary in it.  In “Letting Go” – Wilfred refuses to help Ryan with his problems as a result of his belief that their relationship is one-sided due to Ryan’s selfishness. Written by Reed Agnew and Eli Jorne; directed by Randall Einhorn.

Ryan may have unleashed his dark side in the season one finale but he quickly realized that his actions came with their own set of consequences, and he’s not willing to go down that road again.  That road is paved with deception and betrayal, and his relationship with his sister is still in peril. 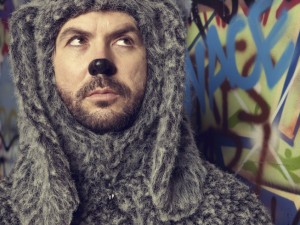 Ryan pays a visit to his beautiful neighbor, Jenna (Fiona Gubelmann), and something catches his eye.  During that visit, Drew (Chris Klein) and Wilfred play a lovely game of catch while Drew confides in Ryan about his “ripage.”  Wilfred decides to share an intimate story with Ryan and lets him know that he keeps precise records of his output.

You’ll find out early on that Ryan’s name is inspiring.  I loved how they worked that in, very creative.  Let me know how many you catch.  I would also like to request a tour with “DJ Here Come The Playa” and “Dr. Wilfred.”  I’m putting that out there because that would be epic (I never use the word “epic” so you know I’m serious).

This season we finally get to see Ryan at work, interacting with his co-workers.   The insanely talented, Steven Weber plays his boss, Jeremy Caulfield.  We will get to know Jeremy next week.  This week we get a taste of awkward Ryan around his co-worker, Amanda (Allison Mack).

I love that we really get to see Wilfred be a dog, and interact with other dogs.  We learn so much about Wilfred in this episode, like the celebrity dude that he wants to be just like, and that he is governed by policies.  My favorite part of the episode is when they come across Don Swayze’s (True Blood) character.  Now that was a priceless moment.  Don Swayze is hilarious and when I asked Elijah about his scene with Don, in a recent interview, he said, “His character is very funny and he was super game to play a relatively nefarious character, and it provided quite a lot of laughs for us and I think he had a really fun time doing it.”   That is just a taste of what you will be missing out on if you don’t watch Wilfred.

Wilfred is one of those shows that is so zany that it just works.  It’s imaginative and astute.  I’ve been hooked on it since my first viewing of the pilot.  I am looking forward to celebrating this series season after season.  Do not miss the season two premiere of Wilfred, Thursday night, June 28 at 10 EST, only on FX.