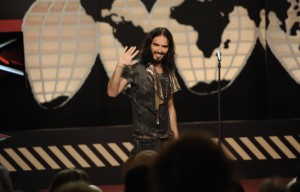 BrandX with Russell Brand premieres tonight at 11 EST, wrapping up a sensational night of comedy on FX.  I have been looking forward to this show since it was announced.  I’m a huge Russell Brand fan and I was curious to see what he would bring to late night television.  I enjoyed Russell Brand’s take on late night immensely.  Even if you’re not a fan of his, you should still give the show a chance because I have a feeling that he will win you over.  He really explores some interesting topics in a fun way.  I’ve always enjoyed Russell’s comedy, and he reminds me a bit of a filthier version of Eddie Izzard.  Like Eddie, and most comedians in general, he incorporates religion, history, social issues, and more into his act and poses challenges that really make you think.  How I connect him to Eddie, besides their charming accents, is that they are both remarkable storytellers that break difficult issues down into easy to digest pieces and in turn bring up some valid points.  BrandX focuses on Russell’s observational humor regarding pressing topics and whatever else he sees fit.

The format of the show is pretty simple it’s Russell, not stuffed behind a desk but out in the wild, in front of an audience having mini breakthroughs about issues and challenging them.  There is a bit of audience participation, and I have to say that the way he conducts himself with them is hilarious.  I love the way he corrects himself with the more common term for an item in the U.S. as opposed to how they say it in England. 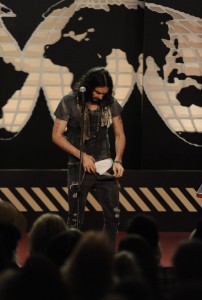 Russell’s “sidekick” and consultant is Matt Stoller.  Matt is a graduate of Harvard University.  His brother, Nick, directed Russell in Get Him to the Greek and Forgetting Sarah Marshall.  If Russell has a question with American politics, he looks to him for advice.

In the premiere Russell talks about his experience meeting the Dalai Lama.  If you watched him on Conan, the other night, you already know about the handshake.  Don’t worry because he has so much more to tell.  He questions the media’s coverage and some of the stats that they choose to include in articles.  I’ve always wondered the same thing myself about the inclusion of specific details that are completely irrelevant to the matter at hand.

You’ll also get to hear about the theology of winning, icons, spiritual principles, a movie that he really likes, and so much more.  He even features quotes by Nietzche and Shaquille O’Neal.  Now you need to watch this show tonight to see how Russell incorporates both of those quotes into the same episode.

It is a very diverse show that has a little something in it for everyone.  I can’t stress it enough that even if you are not a Russell Brand fan, it doesn’t mean that you will not be a Brand X fan.  I’m very pleased with how the show started out.  I’m sure that it will only get better. I also have to mention that Slash composed the theme music and Shepard Fairey provided the original artwork.

Don’t miss the series premiere of BrandX with Russell Brand tonight at 11 EST, only on FX.