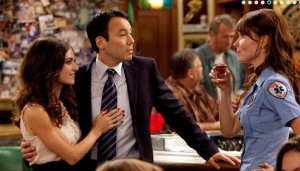 Q:  Vince Vaughn, a majority of the show takes places in a bar, which is very reminiscent of some of the greatest TV shows of all time like Cheers and It’s Always Sunny in Philadelphia. What would you say are the defining similarities and differences between those shows and Sullivan & Son?

Vince Vaughn:  Well, Byrne was – sort of came up with the original concept of the show. I sort of encouraged him, Steve is, like his character, Korean and Irish and he’s a terrific stand-up. And I really encouraged him as he was, you know, starting to get into acting there wasn’t roles for Korean Irish guys to play. So I sort of encouraged him to come up with a concept that he was passionate about, and I would kind of support him and kind of, you know, instead of waiting for that role to come around, you know, kind of create your own weight with it.  And so he met with a bunch of people and his original premise was a guy who was sort of on the corporate track who then sort of plans at opening a bar. And he made the mother Korean first generation and who was, you know, very encouraging of him to take kind of a safer route, and his father was this bar owner. And then we met with Rob Long who worked on Cheers for many years, and Rob seemed like the perfect fit.  And I think what’s different with this bar here is in other shows, although the similarities and locations and all of those kind of things is, you know, like the other shows I think that this takes place in a neighborhood. I just think that this neighborhood is pretty different from the neighborhoods that we’ve seen in the past.  Because, you know, like Steve’s circle of friends our circle of friends who are comics, everyone is from very different backgrounds, and this is that kind of bar, that kind of touches a bunch of different areas. So the bar, I think, looks very much like a 2012 bar in kind of a blue-collar neighborhood and made up of people from different backgrounds who are very close, who have a lot of things in common, and that probably is the biggest difference. With that being said I think that, you know, people in life trying to, you know, find happiness or, you know, places to or friends or relationships, and people to connect to, I think those things are very similar to what the other shows had.

Q:  Can we expect you to make a guest appearance on the show at any time?

Vince Vaughn:  I cannot confirm or deny that at this point. 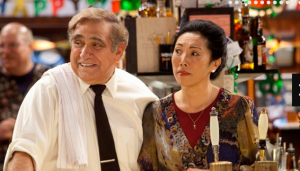 Q:  Steve, I know that this show is about this guy who completely, pretty much changes his life in the hopes of finding something that he actually loves, instead of what’s expected and practical. Were you able to relate to this in any way, like was there something you planned on doing before acting and stand-up, until you decided to follow your dream?

Steve Byrne:  Well my dream, the minute I did stand-up I just – the first night I did it, as soon as I got off stage I said, I don’t care if I’ll ever make a dime doing this, but that’s what I’m going to do the rest of my life is be a stand-up. That’s all I cared about. And so for the last fourteen years I’ve been doing that and Vince has always been so kind and supportive with not only my career but being a great friend.  And he was so encouraging of me to create a vehicle for myself that at the time that I wrote it I was giving everything I had into my professional life, and I really didn’t have a personal life. I wasn’t happy. I wasn’t having anybody to share all these great accolades with. So that was kind of the basis of the show was of pursuing something that’s meaningful or something that matters to you.  And I think home is something that resonates with me. And I always remembered being back in Pittsburgh and being happy, being around my friends and being with my family. So that’s kind of like where I pictured it being is just going back home and having that fun time with all my friends and family again. So that’s kind of how I visualized it when I was dreaming of doing this show.

Q:  Were you inspired at all by Cheers?

Steve Byrne:  The only comparison I think that it really has with Cheers is that it takes place in a bar. I mean, you have Married with Children, All in the Family, The Cosby Show, Home Improvement. There’s a living room, there’s a couch in the middle, but that doesn’t mean they’re all the same kind of shows, you know.  So I think that once people tune in and they see the characters that we have on the show, the language that the characters are speaking, the scenarios that these characters are getting themselves into, it’s completely different than Cheers. And we’re not a broadcast show either, we’re a cable show, so we can push the envelope a little further, and get a little edgier.

Vince Vaughn:  It’s kind of ((inaudible)) it’s one of the great shows, and, you know, Rob did work on that show so it’s not anything other than I just think that, you know, Steve and the dynamic with him taking over the bar and having an immigrant mother and a father is a different dynamic, sort of what is being explored.

Q:  Vince, does this mean maybe we’ll be seeing more producing on television for you in the future?

Vince Vaughn:  Yes, you know, I have a bunch of different things that I’ve kind of been working on and doing, but you know, for me it’s again, you know, I really believe in Steve as a stand-up and I like him quite a bit as a person as well. So this was a fun one for me to sort of throw our hat in and be supportive of and really kind of support the show that he wanted to tell. So, you know, whenever things are fun to work on everything can be work, but if you enjoy it, it makes it very worthwhile.

Q:  Do you consider yourself now an expert on alien invasion, like if this ever happens would you guys be the right team for the job?

Vince Vaughn:  Yes, you know, the fun with the ((inaudible)) you now ripped it off, so for me it’s been awhile. The movies I’ve done in recent years haven’t been that kind of bad so with ((inaudible)) and play around in it in that kind of tone that we did Crashers and Old School and those movies with was a lot of fun. But, you know, I think if you put me in a movie I can be very effective at an alien invasion. But in real life I don’t know if it can translate to me being your first call.

Q:  Steve, how much of this is like your real life? Is your mom really like the mom on the show?

Steve Byrne:  Yes, I mean, there’s going to be some people that say oh, it’s a stereotypical Asian mother, you know, who speaks in an accent. Well my mother came over from Korea and she does have an accent. And she grew up very poor. So she’s almost got the mentality of some of our great grandparents who came up during the Great Depression, where they really value, you know, pocket change.  So my mom did really have that mentality, and my father is really an outgoing, just Irish – he’s got like an Irish bartender’s ear. He’s just a really outgoing, loves story telling, loves having a good laugh, so they really are like my parents. But as the show goes on and the scenarios get a little crazier they become caricatures of my parents.

Q: Which characters did you enjoy the most?

Steve Byrne:  You know what? I enjoy literally all these actors, because it seems like every episode as the episodes have gone on, they’ve all become like designated hitters. Because we’ve got a cast of nine, and you just give Brian Doyle-Murray a line and he’s got maybe six lines in the whole episode, and he’ll just crank them out of the park, Christine Ebersole, everybody. I mean Vivian Bang, Valerie Azlynn, it’s just been – we’re really blessed with the group of characters that we have.  But the most intriguing relationship to me is the one between Carol and Owen where they become each other’s wingmen in the bar scene. So it becomes – the bar almost becomes their hunting grounds in certain episodes. That’s the most intriguing relationship to me, because I’ve never seen it on television before where a mom and a son high five over helping each other get laid. It’s kind of crazy to me.