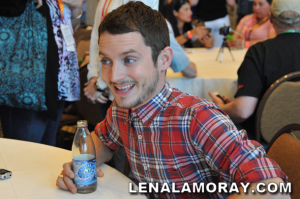 Elijah Wood stopped by our press table at San Diego Comic-Con to discuss his role as Ryan in Wilfred, Thursday nights on FX.  This season of Wilfred has been incredible.  Elijah also spoke about going back to New Zealand to film The Hobbit: An Unexpected Journey.  The only thing that could have made the Wilfred press room any more fun was the presence of Charlie Hunnam so we could have a Green Street Hooligans reunion.  That did not happen but maybe the Wilfred and Sons of Anarchy panels will be on the same day next year.  Yes, I will never shut up about that film.  Elijah and Charlie were phenomenal in it.  You MUST see it if you haven’t already.  Don’t miss Wilfred, Thursday nights on FX.

Most important lesson that Wilfred has taught Ryan so far:

Elijah Wood:  They are all pretty fundamentally important.  Letting go is a big one.  I think that Ryan holds on to a lot of pain, aside of that thing that he was not letting go in that episode. I think Ryan holds on to a lot of his past with his father, concerns about his mother and her mental health, as it relates to him, there is a lot of baggage.  I think that is a pretty important one for him, one of the more important ones.  You can make an argument for all of them but that is a very important one.

Episode that was the most fun:

Films and television being shot out of order: 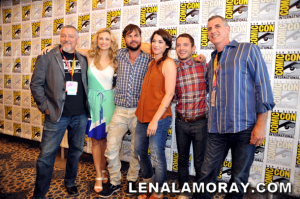 Elijah Wood:  At least with a film you have a single script that has a beginning, middle, and an end.  Shooting these scripts out of order, or getting them out of order, it’s one thing to shoot them out of order but it’s another thing entirely when you don’t get them in order so you can’t actually see the arc.  It was a little confusing because we shot episode one, three, five, seven, nine, and six, or something, it was super random and odd numbers first and one even number.  It’s difficult then to see where things are going if you are missing parts of the story.  We didn’t have the last scripts either, so that makes it a bit more complicated because if you are trying to see an arc, or a sense of progression, and you are missing a large piece of that puzzle it makes it a little bit more challenging especially if you have relationships with certain characters.  You are like we are at this stage here but how did we start, how did we get there?  There were a few moments like that this season.

Watching an episode back and wishing he did something different:

Elijah Wood:  Yeah once, this season there is a scene, in the first episode, where I wake up when Bear’s driving the van and we almost hit the wall.  I did a number of takes in the office of waking up but not abruptly, just waking up slowly.  It needed an abrupt wake up because I was almost going to crash.  I was having a nightmare; when you have a nightmare you suddenly wake up.  I was in the editing room and I was like fuck, we need to reshoot that.  I forgot that we were coming out of a major dream.

Going back to New Zealand to film The Hobbit: An Unexpected Journey: 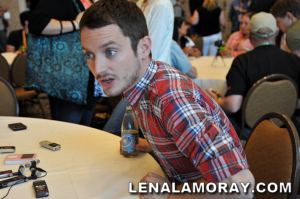 Elijah Wood:  I was there for a month.  I was there in October of last year and it was incredible.  I never thought that I would ever play that character again and it was so wonderful to see everyone.  So many of the same crewmembers are working on it that had worked on The Lord of the Rings.  We got to go to Hobbiton again.  The last time I was in Hobbiton I was 19 and I’m now 31, so it was pretty incredible to go back and get a chance to revisit that time of my life.  It was extraordinary.  I miss New Zealand.  It still feels like a second home to me.  No fountains this time…I’m older, no peeing in fountains.