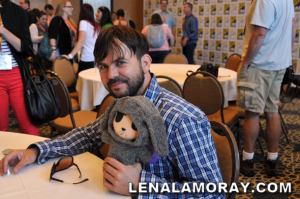 Jason Gann took the time to stop by our press table at San Diego Comic-Con to chat about his hit FX show, Wilfred.  Wilfred has been delighting television audiences since its premiere last year on FX.  There isn’t a show like it on television.  The entire cast is magnificent.  Jason is the Australian heartthrob of the show that zips himself into a dog suit to provide instant pleasure to millions.  Don’t miss Wilfred, Thursday nights on FX.

Where the show has been taken:

Jason Gann:  It’s an adventure.  I never expected or dreamed that where we ended last year was where the show was going to hit.  I never wanted to make the same show again.  I actually said no when I was first asked to play Wilfred because I didn’t want to just do the same show except being surrounded by people with American accents.  It just made no sense to me.  I would rather see a whole new version of the show.  David was a fan of the original and he said that he wanted both shows to sit side by side and that this would be a different vehicle for a character that he loved, which really appealed to me, so I forfeited a little bit of creative control and went along for the ride.  I love it.  To be able to turn up on set and read scenes from time to time where I haven’t been in the engine room, I hadn’t actually written that scene, and to read scripts that are in my voice comedically that I haven’t written is such a luxury that I haven’t had before I came here.  Season two is a different creature again.  The show has taken on such a life of its own and I think for any of us, David included, we could never have anticipated where the show leads.  It opens the door for where the show could go and I’ve got a file filled with possible Wilfred ideas, if we get a third season.

Working with the writers and questioning what Wilfred would do: 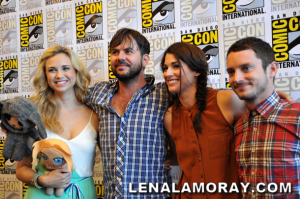 Jason Gann:  Yeah, but it’s never bold things.  I want to make groundbreaking television and every now and then something with come up and I’ll say, “That has never been done on TV before.”  That is when I’m actually at my happiest.  Those moments I love and we probably have a half a dozen of them in season two where there has never been anything like it.  It’s never because it’s too racy or anything, only if it’s too cutesy or too doggy.  I don’t do dog acting.  I don’t scratch behind my ear.  I don’t rub my ass on the carpet.  I have to find a way where he’ll grab a mat or a towel, or something, and do it between his legs.  I have to find a human way to do a dog behavior.  It’s very rare that the other guys don’t see eye to eye with where I want the character to go.

Filming the office scenes and working with new actors:

Jason Gann:  It’s always weird when there is a new big group of actors and extras and stuff like that because you don’t know who has seen the show. I’m very shy; inside I’m still a very shy person.  I come out and I’m really self-conscious and I hope people know or like the show and that they are going to play along.  Every time we do a big group scene like that I’m kind of nervous. 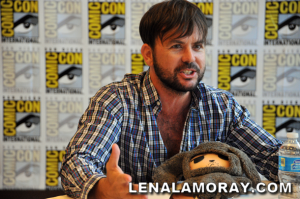 Jason Gann:  My instinct was to like beat the baby up for comic value but it just looked so real I couldn’t do it.  It was disturbing.  Did you see that thing?  There is a picture of Elijah with that thing and it looks like it is fresh out of the womb.  It was fun.  I work with more animals this year.  We had a lot of cats.  There are about eight cats in one episode.  There were some Dobermans and quite a few other dogs.  There were also some pigeons.  I really like working with animals.  The cats were really well trained and I own two cats so I’m a cat guy.  I love having cats on the set and these ones were really cute.

Jason Gann:  I met Rhea and I wasn’t in a scene with her but she was a fan of the show, and it was a real honor to have her on there.