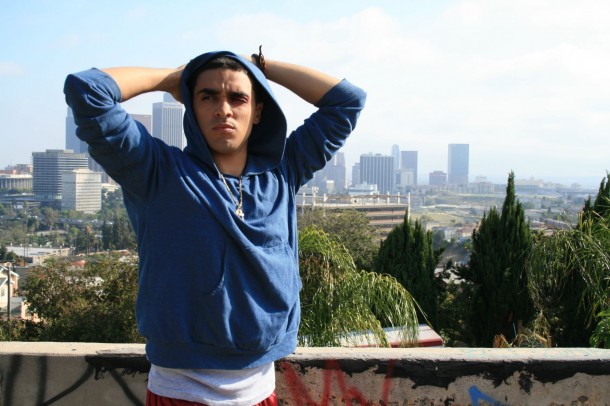 I spoke with E.J. Bonilla about Mamitas, Guiding Light, Four, The House That Jack Built, Law & Order, and so much more.   He’s up for an award at the Imagen Awards, nominated in the Best Actor category for his work on Mamitas.  I loved hearing about his time on the set of Law & Order with Anthony Anderson and Jeremy Sisto.  I miss that show so much.

Lena:  Congratulations on your Best Actor nomination for Mamitas.   I’m sure you are looking forward to the Imagen Awards.

E.J. Bonilla:  Thanks!  I appreciate that.  I’m really excited about that.  I like getting pretty, every once in a while.  I’m flying my mom out to be my date.  I’m taking my mama and my girlfriend, so I will have two beautiful ladies on my arms.  I can look extra cool.

Lena:  Do you have an acceptance speech ready?

E.J. Bonilla:  If I wrote one, I would get so caught up on what I wrote that I would sound like an idiot.  I would just stumble over my words.  I would rather just create some bullet points on things that I would like to touch on.

Lena:  Do you get nervous giving speeches?

E.J. Bonilla:  I’m normally okay in groups if it is a spur of the moment thing, so I don’t have time to overthink anything.  When I know it’s coming, it’s a different story.  That’s where I am at right now, I know it’s coming.  I’m just going to show up and see what happens.  If we were to win and I make a fool of myself, sweet, it will be on video.

Lena:  Can you talk about your role as Jordin in Mamitas?

E.J. Bonilla:  Jordin is an interesting kid.  He’s a lot cooler than I am.  He’s the kid that I always wanted to be in high school, or at least part of me did.  He’s loud, he’s into trouble, but he’s smart.  School is kind of easy so he doesn’t pay attention to it.  Then there is the driving aspect, his mother.  I have an extremely close relationship with my mom so to even imagine for a moment what it would be like to have never known her, that’s a really dark place to go.  To play a character whose mother died giving birth to him is interesting because every happy occasion for other kids isn’t for you.  Every birthday, especially his birthday, it’s supposed to be a celebration of your life but it’s another year that she wasn’t there for him.  Mamitas, in general for me, was really about Jordin and his relationships with the women in his life.   For me, the film is about the exploration of those relationships.

Lena:  What was it like working with the cast?

E.J. Bonilla:  They were a dream to work off.  They were completely willing to give up themselves to really collaborate and make something better.  There were no egos on the set.  I worked a lot with Veronica Diaz-Carranza, she plays Felipa, and I just kept on thinking that I couldn’t have asked for a better co-star.  She and I are such great friends now because of that movie.   There was this day that Jordin finds this scrapbook that his mother made and because he knows nothing about his mother at all, to him she is just these pictures, that was the day that was the most emotional on the set.  I remember finishing that day and having cried so much.  I spent the day just mourning my mother.  It’s a hard thing to let sink in.  At the end of filming that, Veronica just came up to me and hugged me.    When you have that much love on the set, it’s amazing.  Working on the set was fantastic.  Nicholas Ozeki…everyone was just amazing.

Lena:  How about Jennifer Esposito?

E.J. Bonilla:  Oh my god, Jennifer is so cool, and hot.  I was just like I’m going to put in a little extra time hanging out with her.  Jennifer was amazing.  I was happy because she’s in the limelight and I felt like we met each other beat-to-beat in the scenes.  I think that tells you just how good of an actress she is; she’s amazing.  A lot of people are used to seeing her in dramatic roles but she’s funny as shit.  She is hilarious.  I loved hanging out with her. I always believed her; she made it easy for me to believe because the situation was already there for me.

E.J. Bonilla:  No, I didn’t but I worked with her in Blue Bloods.  I saw her in Samantha Who?  She played Samantha’s best friend and it was the funniest show.  I have no idea why it got cancelled because she was hilarious on it.

Lena:  What did you take away from your experience on Guiding Light?

E.J. Bonilla:  Guiding Light had amazing people on it.  I was never a soap opera watcher but once I got on it I starting learning.  They are putting together forty-two minutes of material every single day.  That is half of a normal feature film.  They do in two days what Mamitas took one month to do, material wise.  That’s hard stuff.  That includes the filming and the writing.  Having to pump out that much material every day, every single week without seasons is ridiculous. The negative part of being in that world is being that pressed for time.  If you are willing to give more of yourself than you will do well.  I became a much stronger actor on that show.  I can say that I learned how to act on that show.  Sometimes I wish I could go back and redo it because I was still learning.  Things that would take an actor a couple of years to learn, by being on a set on a soap your learn it quickly.  It’s ridiculous how fast it’s filmed.

Lena:  You’ve guest-starred on some fantastic shows like The Big C, Bored to Death, and Law & Order.  Do you have a favorite guest-starring role so far?

E.J. Bonilla:  I loved Law & Order because most of the time guest stars are only on the set for a day but I was on that show for most of the week.  I got to know some of the actors involved like Anthony Anderson.  We had a really great conversation and he’s a jokester.  He kissed me at one point and I didn’t know how to take it because I was on-camera.  He kissed me on the cheek and I tried to add it into what I was doing but it didn’t make any sense.  It was horrible.  They called cut and everyone laughed.  He looked at me and said, “What are you doing?  I wasn’t on-camera.”

Lena:  Did you get to work with Jeremy Sisto?

E.J. Bonilla:  Yeah, he slapped me.  Anthony kissed me and Jeremy slapped me, so that was the best of everything.  I had a full experience on that set.  I didn’t know it was coming.  He just grabbed my face and I went with it.  It ended up working great for the scene.  I had a great time on that show.  I was really happy with my performance.  Blue Bloods was also a lot of fun because Jennifer was there.   Donnie Wahlberg is hilarious.  He’s a complete goofball.  I would want to make fun of him because of his dance group, his boy band – New Kids on the Block but people love them.

E.J. Bonilla:  They were doing one while I was on the set.  He was just getting back from the tour and was drained and tired.  At one point while we were filming, he had to chase me and he had to stop because he was out of breath.  I think it was because he was physically drained.  I had a great time there.  I love to laugh, so I love any place that I can do that and feel comfortable.

Lena:  Is there a show that you would love to guest star on?

E.J. Bonilla:  I almost got a major part on Falling Skies, but they ended up hiring a local actor.  It would have been awesome to kill an alien.  I really, really like Modern Family.  I would like to be on Happy Endings because it’s hilarious.  New Girl is another show that I would like to be on.

Lena:  You have a couple of films in the works, Four and The House That Jack Built.  What can you tell me about them?

E.J. Bonilla:  Four is a really character driven film.  I had no idea when I was doing it that the camera was going to be so close on my face the whole time.  I loved that story.   Four to me was awesome because the movie is about what takes place all in the course of one night, on the Fourth of July, and what a better night to play independent from the regular you.   The House That Jack Built was another great project to be on because everyone was so willing to share.  I play Jack.

E.J. Bonilla:  Musical Chairs is another film that I did about a year and a half ago and they are going to try to release it again in theaters.  Mamitas is out on DVD.  I think Four is going to do really well.  It’s getting great feedback.  The House That Jack Built, they are trying their best to have it edited enough so that we can make the deadline for Sundance.