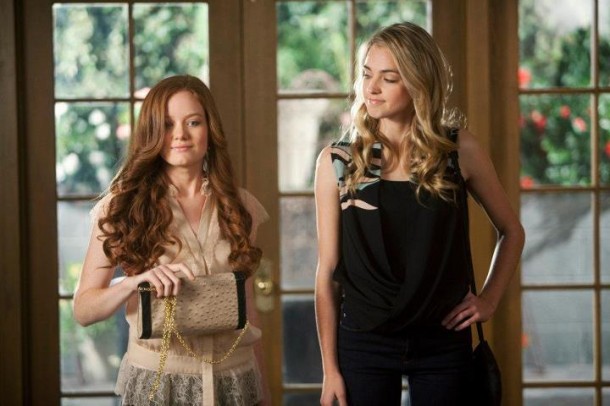 Lena:  Dylan has been awfully busy and involved in some less than appropriate behavior involving drugs, possible arson, and so on.  What is Dylan’s side of the story?  What is going on in her head?

Ana Lucasey:  Oh gosh, Dylan is young and trying to figure it out and maybe not going about things in the best way possible right now.   I think that is the result of a lack of guidance.  Perhaps her parents love her so much but they don’t believe that she can do anything wrong, so she doesn’t get reprimanded and she’s not being taught what to do.  She’s not learning anything.  I think she is but is just taking the long road about it.  She’s figuring it out and she’s having fun I think [laughing].

Lena:  She’s got that love triangle thing going on.

Ana Lucasey:  Yeah.  She’s stuck in the middle and I don’t think she really knows what she needs or deserves and she’s trying desperately to figure that out right now.

Lena:  I still love when Ben (Ken Baumann) says that he accidently slept with Alice (Amy Rider).  What?

Ana Lucasey:  I know.  It’s awful.  I’m so glad that it was finally addressed.

Lena:  How do you accidently sleep with someone?

Ana Lucasey:  You don’t at all.  I don’t care what your excuse is.  You can’t accidently sleep with someone.

Ana Lucasey:  It’s a blast portraying Dylan.  I was never anything like her in high school.  I really didn’t go through a rebellion phase so I’m getting it all out of my system right now.

Lena:  It’s good to go back and do things that you never would have done.

Ana Lucasey:  Yeah.  It’s fun to be young and carefree.

Lena:  What is it like working with the cast?

Ana Lucasey:  They are all fantastic.  They are all so cool and like one big family, even the crew.  Most of the crew has been together since 7th Heaven so they work so fast, and everyone is so tight and welcoming.  I was nervous coming into a show four seasons in because you never really know what to expect but everyone was really cool.

Lena:  Do you have any favorite people that you really like sharing screen time with?

Ana Lucasey:  Definitely Kenny (Baumann); most of my scenes are with him and he’s always fun to hang out with.   The girls who play my girlfriends on the show are some of my closet friends.  They are wonderful.  I’ve also become friends with Renee (Olstead) and Camille (Winbush) and I wish that we had more scenes together but our storylines don’t cross as often as others.

Lena:  What have been some of the highlights for you this season?

Ana Lucasey:  Just all of it.  This is my first consistent recurring job or role that I’ve landed.  It has been such a blessing.  Every day that I’m at work is fantastic and exciting and I’m so happy to be there, I kind of feel like I’m still on this high with this show.

Lena:  You’ve done mostly guest starring roles but some really good ones like on Lie to Me and House M.D.

Ana Lucasey:  Yeah, all awesome sets to work on.  I had great experiences with everything.

Lena:  I’m sad that both of those shows have ended. 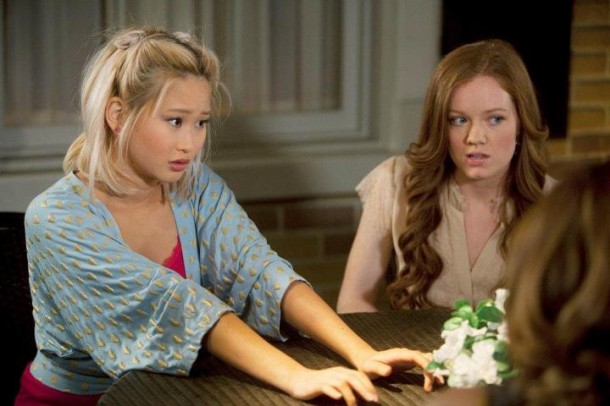 Lena:  What can you say about the finale?

Ana Lucasey:  Actually, I don’t know.  Nothing [laughing].  I can’t tell you anything.  There has been a lot of turmoil and a bunch of relationships this past season and people trying to figure things out and new characters coming in and turning things upside down, so we always have some good cliffhangers for the season finale.  Good things will be happening, too.

Lena:  Do you know when it will be returning?

Ana Lucasey:  We ended around this time last year and we came back in March or something, so unfortunately a while, which is a bummer.  It’s worth the wait.

Ana Lucasey:  I’m going to be going back home to film a little part in a movie called She Loves Me Not withCary Elwes.  I’m so excited to meet him because I loved The Princess Bride.   Joey Lauren Adams will be playing my mom.  It’s a crazy little story about this man and the women in his life.  It should be fun.  I’m really excited especially that it is filming in my hometown.  I get to see my family and it’s going to be great.

Lena:  Who are you playing in the film?

Ana Lucasey:  I’m Joey Lauren Adam’s daughter and Joey Lauren’s character is a love interest, I guess, of the main character.  I’m her daughter from a previous relationship.

Lena:    That sound like fun.  Cary Elwes is awesome.

Ana Lucasey:  It will be fun, easy work with cool people.  I’m excited.

Lena:  That will hold you over nicely until your show comes back.  It’s a more grown up role for you.

Lena:  That’s not a bad problem to have.

Ana Lucasey:  I know.  It helps with the longevity of my career.