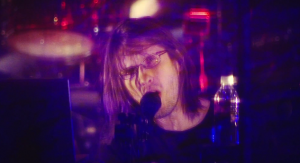 Trailer for Get All You Deserve, a high-definition 4 disc (blu-ray, dvd, 2cd) audio-visual set from Steven Wilson.

Filmed in Mexico City and directed by long-time visual collaborator Lasse Hoile during the Grace For Drowning Tour, the set is a superb representation of the spectacular live experience that Wilson and Hoile created for the tour.

Grace For Drowning was the second album released under Wilson’s own name, following 2009’s exceptionally well-received Insurgentes. The album, released in September 2011, entered the UK top 40 album chart at #34, both the Dutch and German national charts at #22, the US Billboard Rock album chart at #19 (#13 in independent chart) and debuted at #7 in the Polish national charts.

Following the release of Grace For Drowning, Steven embarked on his first ever solo tour, assembling a virtuoso band, featuring Marco Minnemann (drums), Nick Beggs (bass), Theo Travis (flute and sax), Adam Holzman (keys) and Niko Tsonev (guitars), to accompany him. For the shows he worked extensively with Lasse to create a show unlike anything else he had attempted with his other bands, Porcupine Tree, Blackfield, No-Man or Bass Communion.

Get All You Deserve captures one of the key shows from the tour. Recorded at a sold-out Teatro Metropolitan in Mexico City, the gig features tracks from both Wilson’s solo albums along with the new, as yet unreleased, track Luminol.

The limited deluxe edition of the 4 disc set (Blu-ray, DVD & 2CD) is packaged in a DVD sized hard-back 40 page book and is now available to pre-order from the Kscope store for the early bird price of £24.99 (+ P&P).

Grace For Drowning’ is the second album released under Wilson’s own name, and builds on the artistic inroads he forged with 2009’s exceptionally well-received ‘Insurgentes.’

Press for Grace for Drowning is unanimously positive:
‘An album that can’t really be described but it urgently calls to be heard’
Classic Rock

‘Wilson’s ability to create music so prodigiously and to such consistent standards remains a mystery. With his second solo album, the Porcupine Tree leader has done it again.’
Metal Hammer

‘A majestic soundscape created by an innovative, forward-looking musician immersed in the history of music’
Record Collector

‘This is a magnificent step up; he simply can’t be stopped.’
Classic Rock Prog