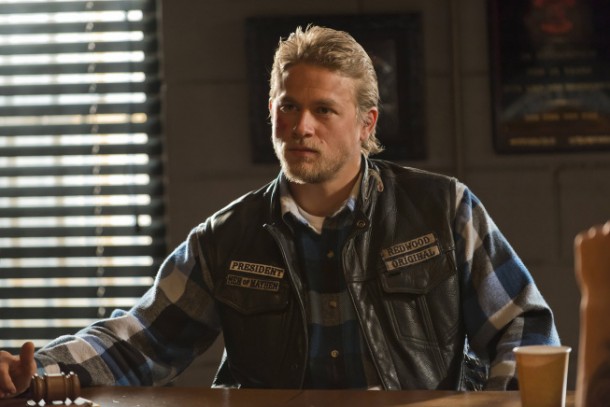 Sons of Anarchy comes back this week stronger than ever. The season five premiere is a reflection of how far the series and its stars have come.  There are performances, in this episode alone, that set the bar so high I can’t wait to see what the rest of the season has in store for us.  I know I’ve said this so many times before but this cast is extraordinary.  “Sovereign” – Jax presides over SAMCRO as a series of events begin to unravel Charming.  “Sovereign” was written by Kurt Sutter; and directed by Paris Barclay.

The episode opens with Jax (Charlie Hunnam) traveling down a road of uncertainty but he has some sage advice to offer his young sons. What does the future hold for SAMCRO?  Now that Jax is president will he, at some point, be able to bring his ideas and visions to full fruition?  The shackles can’t hold him forever.

One thing that is made very clear in this episode is that Gemma (Katey Sagal) knows how to party.  Tara (Maggie Siff) deserves to relax and manage her pain, but you can also say that she is a bit of a hypocrite.  Do you remember when we first met Tara Knowles?  She has become so much stronger and you know exactly why Jax could not get over her.

As much as Tig (Kim Coates) is a walking Britney Spears song he always comes to the aid of his fellow brothers.  I still can’t believe that he “Did It Again” and killed the wrong person.  I guess we can thank Tig in advance for this wonderful season because his handy work has brought in so many new and intriguing characters and situations.  The synopsis says that events are unraveling and let me tell you that is an understatement.  Shit goes down. There are also so many intricate stories developing that this is sure to be one of the best seasons yet.  If you were disappointed with the season finale don’t worry because this premiere makes up for it.  I admire Kurt Sutter’s writing and vision because even if it seems that he has painted himself into a corner he always manages to find a surprising new path.  That is the unsung beauty of this series.

Thanks to Tig, we get to meet Damon Pope (Harold Perrineau) and August Marks (Billy Brown) this season. What a wonderful casting job.  If you had a vision of who Damon Pope should be it has been fulfilled far beyond your expectations.  I loved Billy in Lights Out.  They are both brilliantly strong characters that do not enjoy “loose ends.”

Rockmond Dunbar also returns as Eli Roosevelt.  Billy Brown’s addition makes it as if FX is just teasing us with our favorite actors from our favorite cancelled shows.   If they are really going down that route, I think Donal Logue, Michael Raymond-James, and Holt McCallany would also make a wonderful addition to Sons of Anarchy.  Joel McHale is going to be a guest star this season, so I’m really looking forward to that.  I’m sure Joel will end up naked at some point. 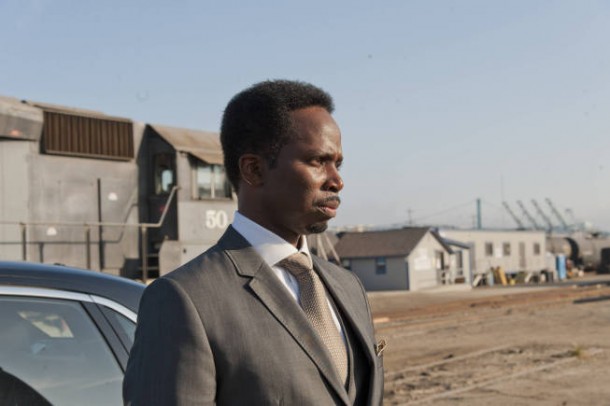 Jimmy Smits delivers some unforgettable scenes as Nero Padilla.  He is smitten with Gemma and some hilarious ribbing occurs between the two of them.  I hope Nero is here to stay.  He adds a unique charm to the series and his “life’s ambition” should be printed on a t-shirt and followed by everyone.

Dealing with family isn’t always the easiest thing on the planet and Jax’s face when Tara brings something up is the reason why the word priceless was invented.  I have to say that I’m very proud of Tara.  She has fallen so many times but she is quickly learning the ins and outs of survival.

Chucky (Michael Ornstein) is only in one scene but he steals it, as usual.  I certainly hope that they work him in more this season.

If you were Opie (Ryan Hurst) would you be able to forgive the people that have hurt you the most?

I’ll admit that I was on the kill Clay (Ron Perlman) bandwagon but after seeing what he has become his death would have been a gift that he didn’t deserve.  That being said, I don’t believe what he’s selling.  In the preview he talks about not having any play left.  Do you believe him?  Given his history do you think he is just going to fade away? 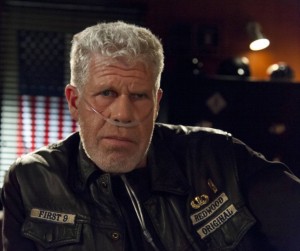 When Roosevelt pays the boys a visit free jokes are provided courtesy of Tig and Chibs (Tommy Flanagan).  Tommy is one of the most underrated actors of the series.  Even when he is just in the background he stands out.  He even offered my short ass a chair to stand on to take pictures in the Comic-Con pressroom.  Not only is he a brilliant actor but he’s also a considerate fellow.  No one has ever offered me a chair before.

What would the club do without Unser (Dayton Callie)?  He has helped them out so much and in a way they give him a reason to live.  Unser is a delicate soul that yearns for a love that he will never have.  This should be Unser’s year and if it doesn’t happen for him the boys should at least take him to the whorehouse with them.

Also added to the list of characters this season are Frankie Diamonds (Chuck Zito), Greg the Peg (Kurt Yaeger), and Gogo (Chris Browning).

Obviously, I’ve left a lot out.  I didn’t want to spoil anything.  I can tell you that this premiere will stay with you forever.  Don’t miss the season premiere of Sons of Anarchy tonight at 10 EST on FX.

Take a look back at seasons 1 & 2 of 'The Americans'
'Sex&Drugs&Rock&Roll' preview and Liner Notes: Dress Rehearsal
JUSTIFIED preview clip