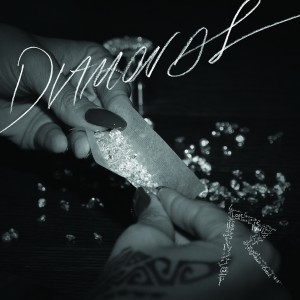 (Sept. 24, 2012 – New York, NY) Fresh off her buzzworthy headlining performance at Friday’s massive iHeartRadio Festival, and her spectacular opening performance at the 2012 MTV VMA’s – where she won the night’s biggest award, Video Of The Year for “We Found Love,” – worldwide superstar Rihanna opens the next chapter of her reign as this century’s Queen of the Billboard Hot 100 with her new single “Diamonds.” “Diamonds” will make its global premiere on Wednesday, September 26th with an 8:00am launch at radio stations worldwide. An hour later, at 9:00am EST, “Diamonds” will go up for sale at iTunes Music Stores worldwide. Just weeks ago, Live Nation announced the Rihanna Diamonds World Tour 2013.

“Diamonds” is the first single from Rihanna’s upcoming seventh studio album on Island Def Jam, details to be announced in the weeks and months ahead. “Diamonds” was produced by Norwegian hitmakers Stargate, whose track record of worldwide Top 10 hits with Rihanna stretches back to 2006’s “Unfaithful,” and includes “Don’t Stop the Music,” “Take A Bow,” “Rude Boy,” “Only Girl (In the World),” and “What’s My Name” (featuring Drake), and “Talk That Talk.”

Live Nation’s Rihanna Diamonds World Tour 2013 is slated to open at the Niagara Center in Buffalo on March 8, 2013, with North American dates scheduled through May 4th at the new Barclay’s Center in Brooklyn. (Please see tour dates below.) Tickets for most venues go on sale Friday, September 14th through September 21st (check local venue).

Rihanna’s Video Of The Year at the MTV VMA’s capped a near year-long campaign in support of her sixth studio album, Talk That Talk (released November 21, 2011). The album’s string of global hits spanned over a year, starting with the worldwide #1 smash, “We Found Love” (featuring Calvin Harris). The song spent 10 weeks at #1 on the Billboard Hot 100, beating Rihanna’s personal best of 7 weeks at #1 in 2007, for “Umbrella” (featuring Jay-Z).

Rihanna made history as “We Found Love” became her 11th #1 hit on the Hot 100, and her 20th Top 10 hit. She collected her 20 Hot 100 Top 10 singles faster than any other solo artist, as reported by Billboard.com, and placed Rihanna second only to the Beatles. In the ‘20-and-over’ Top 10 hits race, Rihanna enters a very rarefied field as just the fifth woman to earn the honor.

The recipient of six Grammy Awards® and seven Billboard Music Awards, Rihanna has sold over 37 million albums and 146 million digital tracks worldwide, and currently holds the record for top-selling digital artist of all time. A member of the TIME 100 most influential people in the world, Forbes named Rihanna the world’s #1 social media star with over 2.7 billion views on YouTube/VEVO, the most ever for any female artist, over 60 million Facebook fans, and over 26 million Twitter followers. In addition to her 11 Hot 100 #1 singles and overall 22 Top 10 singles, she also has 18 #1 singles on the Billboard Dance Club Song Charts.