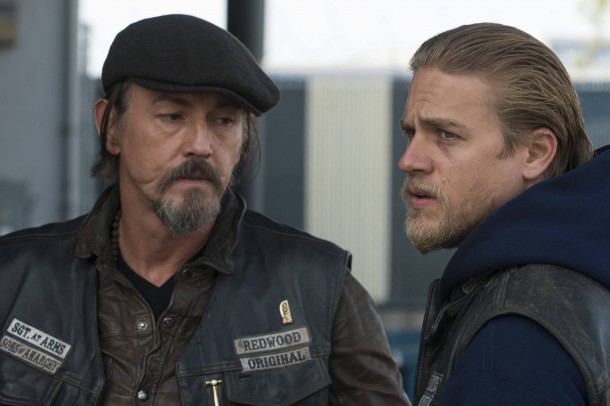 Every time I watch an episode of Sons of Anarchy this season I can’t help but think of that scene from Willy Wonka and the Chocolate Factory, “The Wondrous Boat Ride.” Being a fan of Sons of Anarchy is like always being on that scary boat ride.  You never know what direction Kurt is going to take you but you sure as hell know that you are going to enjoy the ride.  Tonight’s episode is no exception.  “Andare Pescare” – Jax gets closer to the truth but there are still obstacles in his way.  Written by Liz Sagal and Kurt Sutter and directed by Billy Gierhart.

Jax (Charlie Hunnam) has changed so much from the first time that we met him.  Remember that first murder and how difficult it was for him?  He’s certainly approaching Cherry ICEE level now.  That is that he’s sweet but cold and when he commits violent acts the faces that the other members give him almost look like they are all suffering from brain freeze.  After years of being beat down Jax is doing what he has to do to survive, and that definitely comes with a high price.

In the last episode, Frankie Diamonds (Chuck Zito) makes a series of really bad decisions and shoots Lyla (Winter Ave Zoli) and takes Chibs (Tommy Flanagan) hostage.  Frankie Diamonds was my least favorite character before this went down and then he went on a rampage and hurt Lyla and Chibs…someone needs to take him out stat.  The boys have to figure out what needs to be done about Frankie.  It’s obvious what needs to be done but by whom.  You know Roosevelt (Rockmond Dunbar) is going to be hot on his trail because that scumbag killed his wife and unborn child. Tig (Kim Coates) has some ideas on what to look out for.  Bobby (Mark Boone Junior) is the voice of reason this season.  What do you think should happen to Frankie? 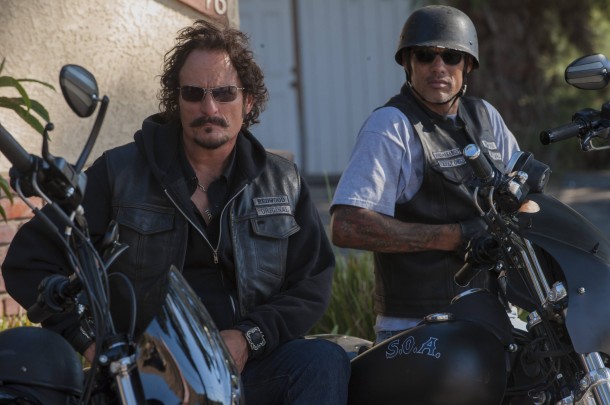 Can Jax count on Gemma (Katey Sagal) to make Clay (Ron Perlman) feel “like a king” again?  That is definitely a hard pill to swallow no matter how you look at it.  Is Gemma too broken to be a pawn in his plan?  What will happen with Nero (Jimmy Smits)?  Gemma has some hard decisions to make but given her inexcusable recent behavior, does she really have a choice? Nero is still my favorite new character this season.  Jimmy is just killing it.  There is a really sweet scene in tonight’s episode with Nero, Gemma, and a very special guest.

Do you think it was smart of Juice (Theo Rossi) to share his secrets with Clay?  I’m sure it felt good to be able to come clean but to Clay…

The gorgeous Karina Logue (Terriers) guest stars on tonight’s episode.  She is another piece of the Terriers puzzle.  I can’t wait to meet Donal Logue’s character.  I hope he gets to interact with Roosevelt.  All we need now is Michael Raymond-James for the win.

Tara (Maggie Siff) has an intense experience but keeps her cool and doesn’t let it rub her the wrong way.  Speaking of Tara, if you were Tara could you ever find it in your heart to forgive Gemma?

Of course no episode would be complete without some action-packed sequences and a good old-fashioned fight scene.  One of the scenes reminded me of that Chappelle’s Show sketch where John Mayer plays death metal music to see how people would react.  There is also a bit of romance to keep the flow going.

Do not miss tonight’s extended (set your DVRs accordingly) episode of Sons of Anarchy at 10 EST, only on FX.