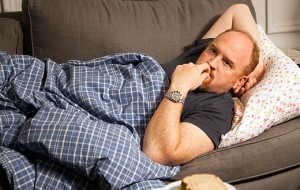 LOS ANGELES, Nov. 12, 2012 – Red-hot comedy star Louis C.K. will return to HBO next year in an all-new stand-up comedy special, it was announced today by Michael Lombardo, president, HBO Programming. To be taped at one of the stops of his sold-out 16-city tour, which wraps in February, the exclusive presentation will be his second hour-long special on the network and will be directed by Louis C.K.

“I’m delighted to welcome the gifted Louis C.K. back to HBO,” said Lombardo. “This comic genius remains one of the freshest voices on the scene, and HBO is proud to provide an uncensored forum for his provocative humor.”

Earlier this year, Louis C.K. won two Emmys®, for Writing for a Comedy Series for the FX series “Louie,” and Writing for a Variety Special, for “Louis C.K. Live at the Beacon Theatre.” On Nov. 3, he hosted “Saturday Night Live” for the first time.

His previous HBO credits include the hour-long 2007 stand-up special “Louis C.K.: Shameless,” and two half-hour specials, a 1997 edition of “HBO Comedy Half-Hour,” and 2005’s “One Night Stand: Louis C.K.” In addition to creating and starring in the 2006 series “Lucky Louie,” the network’s first multi-camera comedy series, he won an Emmy® as part of the writing team for HBO’s “The Chris Rock Show.” Louis C.K. also appeared with Ricky Gervais, Chris Rock and Jerry Seinfeld in the 2011 HBO special “Talking Funny.”