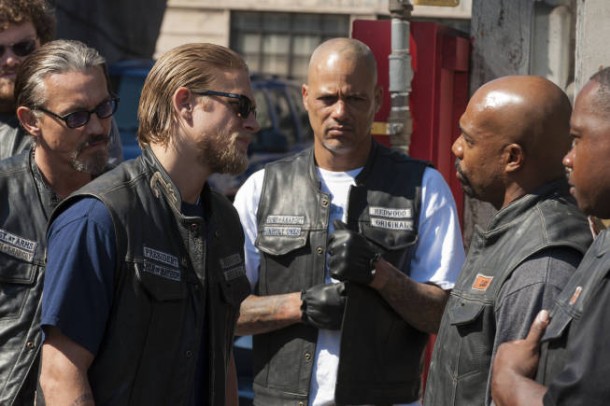 Tonight’s episode of Sons of Anarchy doesn’t stray from this season’s theme of blood, violence, and tears.  Oh yes, blood will be shed and in a cinematically beautiful way.  Guy Ferland did a brilliant job directing “Crucifixed.”  “Anticipating backlash, Jax goes into high gear with his own agenda.”  Written by Kem Nunn.

Last week on Sons of Anarchy, Jax (Charlie Hunnam) found out Juice’s (Theo Rossi) secret and was seen tailing him in the darkness.  I wouldn’t want to be Juice.  Jax has been very unforgiving this season and the club is pretty clear on what happens to rats.  Obviously, the big question this week is what Jax is going to do about (or to) Juice.  Will Juice survive?  What do you think?

I have to take a moment to commend Theo Rossi on the phenomenal work that he’s doing on screen and off.  Theo may be playing a character that has made mistakes on Sons but in real life he is a hero.  He has been helping out his hometown of Staten Island, New York.  Superstorm Sandy devastated the area and loss of electricity is only the beginning of the mounting problems.  Some people lost their homes, even their lives, and Theo is in the middle of it all helping out everyone and anyone that he can.  I’ve always said that you will never meet a nicer group than the cast of Sons of Anarchy and if that isn’t proof then I don’t know what is.  Thank you so much, Theo.  To those that can help out here is a direct link to do so: http://www.crowdrise.com/statenstrong.

Gemma (Katey Sagal) is not left out of the spotlight tonight when a couple of the boys show some concern.  Gemma has never made anything easy for herself.  This season her discretions have really cost her the love that she truly desires.

I will tell you that every parent that watches this show is going to be positively stunned at what Tara (Maggie Siff) does.  Who in their right mind would do that?  When you see it you will know.

When Jax is consulting with his fellow brothers some of what he says may surprise you.   There is certainly a bit of a promise, perhaps a small step in the right direction, amongst the anachronous ways of the club.  Some things never change because yet again, Bobby (Mark Boone Junior) is the voice of reason.  All season, Bobby has been the only person that has maintained a clear head.  He is the responsible one that always thinks of the club as we and not me.  Jax really needs to take it down a notch, or several hundred, and see things for how they truly are.  Jax has been focusing on the now and not the future.  All of his actions have consequences and it seems like he just doesn’t give a damn who gets hurts, or what bridges he burns.  With only a few episodes left this season I can’t imagine how it is all going to end.  Is Walton Googins going to guest-star again as Venus Van Dam but this time instead of bringing sexual favors he’s going to be packing sandwiches? 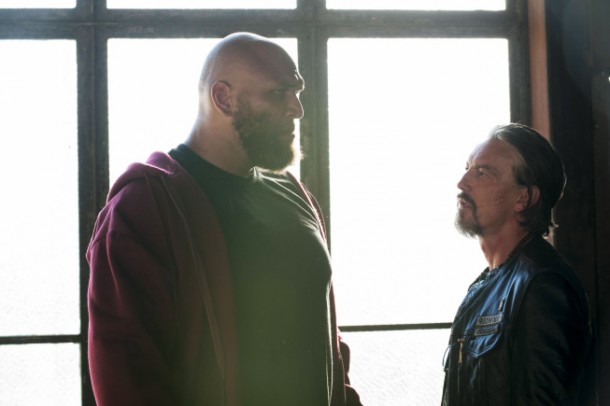 This is a strong episode for Chibs (Tommy Flanagan).  He actually made me tear up.

Expect to see some familiar faces tonight.  One of my favorite Grim Bastards (Goldie DeWitt) makes an appearance.  Lenny the Pimp (Sonny Barger) also shows his face. Karina Logue is back as Nurse Pam Toric and I will proclaim my love for her hair again tonight.  She has it pulled back but there is no mistaking those gorgeous locks.  Yes, I have hair envy.  She needs to do a Pantene commercial with Ryan Hurst and Mark Boone Junior.

Clay (Ron Perlman) spends the episode in typical Clay fashion.  How is he still alive?  Are we still taking bets as to when and where his time is going to come to an end or have we given up?  I think when it happens we are not going to even see it coming.  I say that he is going to slip getting out of the shower and he’s going to throw his back out while the birds act out a scene straight out of Alfred Hitchcock’s The Birds on him.

There are so many intense scenes in tonight’s episode.  There is one that is just almost incomprehensible.  It’s one scene that garners the director a standing ovation.  This episode is fantastic and clearly, this has been one hell of a season.

Do not miss tonight’s extended (set your DVRs accordingly) episode of Sons of Anarchy, “Crucifixed,” at 10 EST, only on FX.