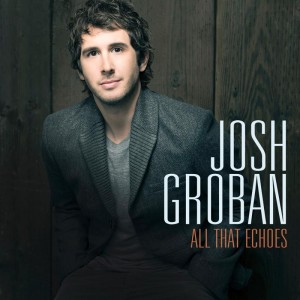 November 19th, 2012 – Burbank, CA – Internationally renowned, multi-platinum recording artist Josh Groban has announced that he will release his eagerly anticipated sixth studio album, entitled All That Echoes, on February 5th, 2013, on Reprise Records. All That Echoes was produced by Warner Bros. Records Chairman Rob Cavallo, who has also worked with Green Day, Dave Matthews Band, and many others. Other producers include Walter Afanasieff (Mariah Carey, Michael Jackson) and Lester Mendez (Shakira, Nelly Furtado).

All That Echoes will be available for pre-order via Amazon beginning November 20th and iTunes the week of November 27th. A direct-to-fan version, containing bonus material, will also be available exclusively via Groban’s website, joshgroban.com. More details about this special edition will made public in the coming weeks.

“From beginning to end, this project has blossomed with absolute joy and inspiration,” Groban says. “Together with Rob Cavallo and all the incredible collaborators, we set out to create songs that could bridge the old and the new, the light and the dark of life and love … all that echoes in our souls. This album makes me feel good, and I hope others feel the same way.”

“Josh is a consummate musician,” Cavallo says. “He is a true talent, an unbelievable singer, and a friend who has totally inspired me. We both took risks we wouldn’t have taken without one another, and, as a result, the music flies higher than I ever thought possible. I love this album and am extremely proud of it. It’s a sonic adventure that reaches deep into the soul and I can’t wait to share it with the world.”

Groban first broke through in 2001 with his self-titled double-platinum debut album, followed by 2003’s multi-platinum Closer, featuring the smash hit “You Raise Me Up,” and 2006’s double-platinum Awake. In 2007, the Grammy-nominated star became the best-selling recording artist of the year thanks to sales of Awake and his blockbuster Grammy-nominated Christmas album, Noel – the best-selling album of 2007. Groban ranks as Billboard’s 14th top-selling artist of the 2000s with more than 20 million units sold in the U.S. alone and 25 sold million worldwide. He is the only artist who has had two albums appear on the Top 20 Best-Selling Albums list of the past decade, according to Billboard. Over the last two years, Groban has completed a sold-out world tour in support of his fifth album, the platinum-selling Illuminations, appeared in the feature film Crazy, Stupid, Love, as well as on NBC’s The Office, and launched the Find Your Light Foundation, which is dedicated to enriching the lives of young people through quality arts education.