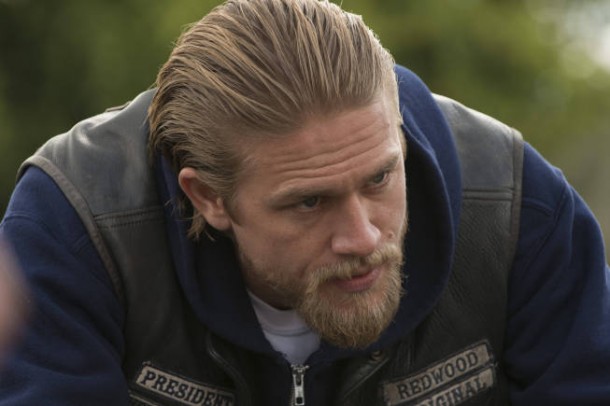 It’s hard to believe that tonight will be our last night in Charming until late next year.  Sons of Anarchy has shown us its darkest colors and the rivers of crimson will never subside.  Season five has been an arduous and intense journey.  “Keeping life beautiful” has never been so ugly.  “J’ai Obtenu Cette” – Jax strikes a deal while ridding himself of old problems.  Written by Chris Collins and Kurt Sutter; directed by Kurt Sutter.

Every season we have to say goodbye to someone, but this season the loss was substantial.  Watching Opie (Ryan Hurst) take his last breath was heartbreaking.  I know this is just a television show but that wasn’t easy to watch.  Not only do you have to sit there and watch one of your favorite characters die but you are also forced to realize that this will be the last time that you will ever see them on Sons of Anarchy.  That isn’t enjoyable but it certainly speaks volumes for the show and actors that portray these characters that we welcome into our lives. 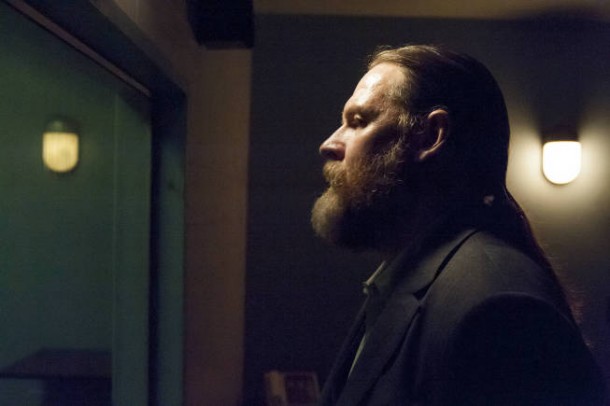 This season has been my favorite season and a lot of that certainly has to do with the guest cast.  Every week I was checking off someone that I had on my short list of actors that I want to see on Sons.   I guess I’ve been watching The League for too long because I have assembled my Sons of Anarchy dream team.  Walton Goggins, Jimmy Smits, and Donal Logue made the cut this season.  Now if Michael Raymond-James and Fred Dryer make it on next season my list will be complete.  I know that everyone enjoyed seeing Joel McHale get roughed up and his stunt double driver was hilarious.  Dave Navarro also has another small part in tonight’s episode.  Who were your favorite guest stars this season?

Last week Jax (Charlie Hunnam) did the unthinkable to Wendy (Drea de Matteo).  This season there hasn’t been a line that was too difficult for him to cross.  He has become a “savage.”  His quest to change things has led him down the same deceitful path. 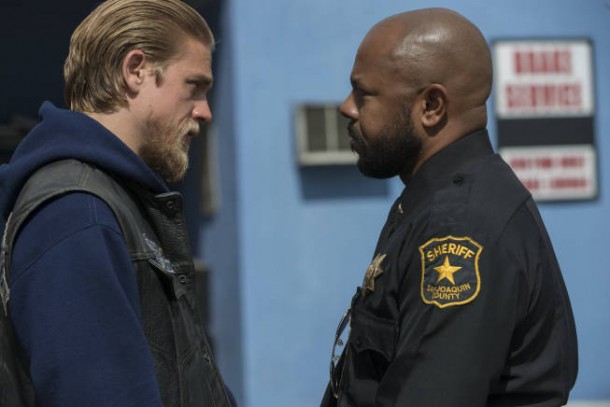 Tonight’s episode is eerily familiar.  On a positive note, Chucky (Michael Ornstein) provides some comic relief.  Chucky really needed to be in every scene this season.  I don’t know about you, but I cherish every moment that he is in because it helps ease the burden of the more daunting scenes.

Jax’s meeting with Pope (Harold Perrineau) with leave you squirming because you know what that conversation is going to be about.  Will Jax really give Tig (Kim Coates) over to Pope?  Pope has already made it clear what will happen if Jax doesn’t go though with the plan.  Tig has done some horrible things but he doesn’t deserve to be handed over like an animal to slaughter.  I love Tig and I’m happy to report that he redeems himself in a certain department.  He has so much more freaky love to give that it would be agonizing to lose him.  There is a truly beautiful moment with Tig; the man that he is inside shines through. This season really proves that no one is safe so enjoy your time with your favorite characters because their time may be up.

Tara (Maggie Siff) gets some wonderful news but there are two sides to everything.  If you have seen the preview then you know that Gemma (Katey Sagal) isn’t too keen on what Tara is up to.  Do you think Tara is going to go through with her plan?  She just wants a better life for her family.  Can you blame her?  Charming is full of trapdoors and she would be wise to get out.  She has to be the change that makes everything right.

Chibs (Tommy Flanagan) has been the highlight of this season.  His skills have helped keep everyone together.  Bobby (Mark Boone Junior) has also been the voice of reason but will Jax forgive him for going behind his back with Clay (Ron Perlman)?

Wayne Unser (Dayton Callie) earns his keep and furnishes Jax with some information on Lee Toric (Donal Logue). That last image of Lee was not very promising.  Good or bad, I don’t think this is the last that we will see of Toric.  Hopefully, Donal’s character will return and cross paths with Roosevelt (Rockmond Dunbar).  Terriers is one of the few shows that has been cancelled that I still think about.  It was THE perfect show; the cast, the writing, the direction, everything was perfect but by the time viewers caught on it was too late.  Lee’s scenes with Otto (Kurt Sutter) were some of the most riveting scenes in the last few episodes. 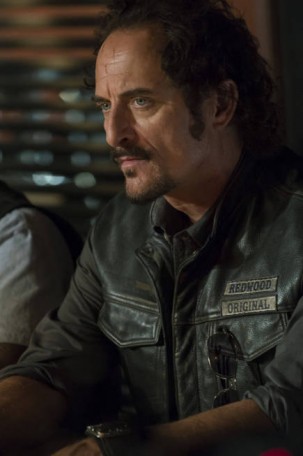 What to expect tonight?  The body count increases.  Look for a familiar face to show up at a pivotal time.  I’m just throwing this out there but when is the last time that Jax fixed a car?   Nero (Jimmy Smits) and Jax have that conversation again.

The finale is full of action and I’ll be honest, there are some scenes that I’m not looking forward to seeing again.  It’s a rough episode but there is one scene that I wish would play out for everyone that gets involved in that sort of thing.  You will know exactly what I’m talking about when you see it.

I enjoyed the finale.  It wasn’t my favorite episode of the season but it had its fair share of twists and turns and the ending will have you cursing that September is so far away.  I still can’t get over how incredible “Orca Shrugged” was so it will be hard to ever top that one in my book.  I can’t wait to see what is going to happen next season.

Do not miss tonight’s extended (set your DVRs accordingly) episode of Sons of Anarchy, “J’ai Obtenu Cette,” at 10 EST, only on FX.