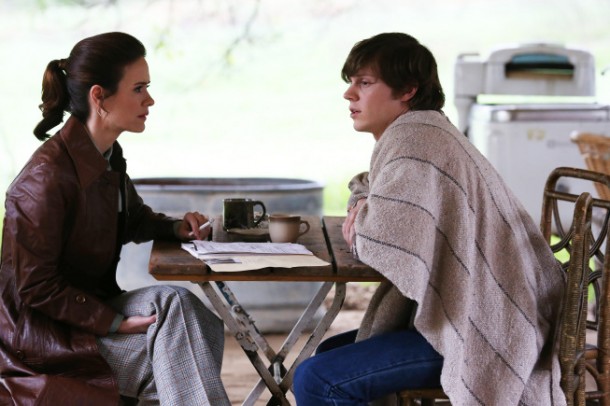 Tonight we wrap up another incredible chapter of American Horror Story: Asylum.  What a magnificent journey our tour through the asylum has been.  We got a chance to witness the minds of madness and the maddening of minds.  At times it was almost too overwhelming to watch.  Ryan Murphy and Brad Falchuk know exactly what to do to make people crawl out of their skin.  Well done, boys!  In tonight’s conclusion, “Madness Ends,” Johnny sets out to complete his father’s work.  Lana leads the charge to finally shut down Briarcliff.  Written by Tim Minear and directed by Alfonso Gomez-Rejon.

Tonight’s ending was once a beginning and it is a sad reminder that we will never be able to experience that unique terror again.  Enjoy it tonight because these characters, as we know them, will take their final bow or kiss until a new life is, hopefully, given to them.

Lana Winters (Sarah Paulson) has had trying time and she lived to tell the story of her life and what went on in Briarcliff.  Is she “the luckiest woman alive?” She has lived an “eventful” life and walked away with one hell of a story but at what costs? Bloody Face (Zachary Quinto) took what she loved and replaced it with what she feared the most. What does the future hold for Lana? 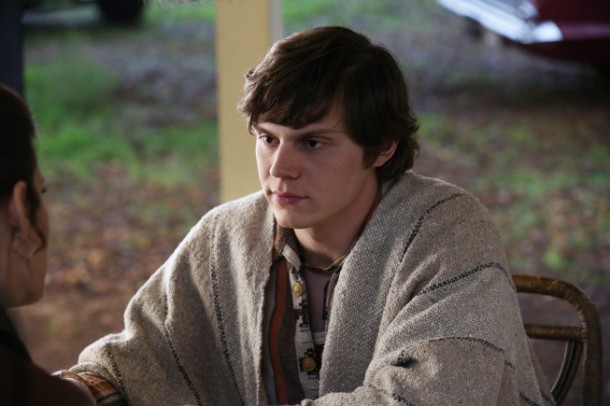 It’s been said that you can judge a man’s soul by the way he enjoys his dessert and with that being said, Johnny (Dylan McDermott) has one freaky dark soul.  I wonder how many times Dylan had to film that scene to get it just creepy enough.   I’m so happy that they brought Dylan back. Not only was he amazing last season but I think Ryan owed it to him after all that crying and masterbating that he made him do.  When you bring up the original season of American Horror Story that is generally the first thing that people want to talk about.  Dylan is brilliant in tonight’s episode.

Last week we got to see what was going on in Kit’s (Evan Peters) life and tonight we will see another side of him.

Monsignor Howard (Joseph Fiennes) manages to steal the scene with a delightful greeting. 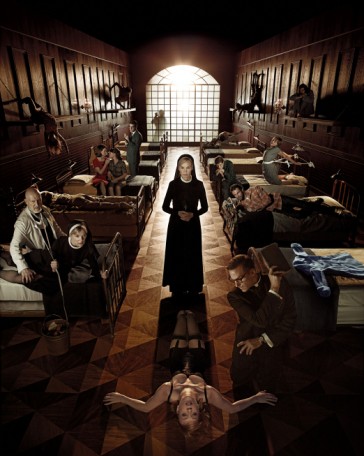 Sister Jude (Jessica Lange) said it best, “If you look in the face of evil, evil is going to look right back at you.”  Jessica Lange gave another stellar performance.  Her stunning portrayal of a woman who ran away to avoid her demons but ended up fighting an actual demon was brilliant.  I can’t wait to have her back next season.

“Lies are like scars on your soul, they destroy you.”  Truer words have never been spoken and that one line can go a long way in summing up the series.  Lies brought people together and tore them apart.  Lies have the power to save and end lives.

American Horror Story: Asylum is a masterpiece.  I adored the season.  I will admit that these last few episodes were not my favorite of the series.  I missed the tension that Dr. Arden (James Cromwell) and Sister Mary Eunice (Lily Rabe) brought to the table.  You never knew what those two were going to do.  Overall, the series was pretty much flawless and I’m envious of those that have not yet discovered it.  They will get to see it from the beginning, with virgin eyes.  The series is breathtaking.  They take the time, with every episode, to make sure that everything is perfect.  They believe in creative angles, using mirrors, perfecting shots, and makeup, beautifully done makeup.  I’m so sick of 100% CGI.  American Horror Story should be a lesson to all filmmakers on how to film a series.  They use it sparingly, if at all, and know exactly what works. The wings on Frances Conroy’s character are an example of a breathtakingly beautiful sequence.

Do not miss the season finale of American Horror Story: Asylum tonight on FX.  It’s a charming conclusion that will close the doors for good.