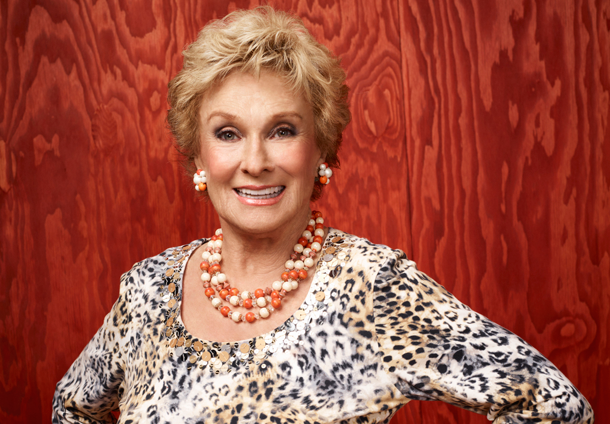 Cloris Leachman took the time to chat about her role as Maw Maw on Raising Hope. How could you not love Maw Maw on Raising Hope?  Maw Maw and Burt, played by the incredibly talented Garret Dillahunt, are my favorite characters on the hit show.  Raising Hope airs Tuesdays at 8:00 p.m. on Fox, and tonight they have a special wedding episode where Jimmy and Sabrina get married. Leslie Jordan guests stars as the reverend.  There will also be a second episode at 8:30, Part I of a special two part arc where Jimmy and Sabrina head to Los Angeles for their honeymoon and the whole family tags along, including Maw Maw, who wants to settle an old score with her ex-husband.  Don’t miss Raising Hope tonight on FOX.

Q:  Can you talk about how you go the role in the show?

Cloris Leachman:  I think Greg, the creator of it, he wanted me.  I think he just wanted me, and there I was, so he got me.

Q:  Can you talk a little bit about working with Leslie in this upcoming episode?

Cloris Leachman:  First of all, he walk in and he’s there and he’s so short that you just start laughing.  I don’t know he handled it all his life, but he’s certainly turned it to something good.  He’s just rare.  He’s not a Little Person, but he’s very short.

Q:  The filming style in the wedding episode, it’s sort of a spoof on Modern Family and I’m just wondering if it was noticeable, as an actor, when you were filming it that it was being done in this different sort of way.

Q:  Was there anything about Maw Maw that wasn’t originally scripted for you, but you added to the role?

Cloris Leachman:  Goodness, let me think for a minute.  They added everything.  I added a white bra that the head of wardrobe, we decided what kind of bra I would wear.  It’s a white, good, serviceable one that holds me up.

Q:  Is there anything you’ve learned about comedy or being comedic from portraying this role?

Cloris Leachman:  Oh gosh, what questions these are.  Dear, dear, dear…what did I learn?  I laugh too much.  I keep ruining scenes and they have to do it over, so that’s not too good.  What did I learn about comedy?  Not to laugh.  I haven’t learned it yet, I still laugh too much.

Q:  Out of all the media that you’ve worked – on stage, to obviously, you’ve won an Oscar in film and Emmys on TV – what’s your favorite to work in?

Cloris Leachman:  I don’t have a favorite.  It’s the material and the people and the situation, that’s my favorite.  It’s all exciting and fun and I love every bit of it. including radio.

Cloris Leachman:  No, but stripping is fun –

Q:  The great thing about Raising Hope is that it’s sort of forbidden laughs. How do you react when people say oh you shouldn’t joke about certain subjects?

Cloris Leachman:  I’ve never heard that or read that or know anything about it – nobody tells me anything.  That’s what happens when you get old.  They talk about you but you never hear it.

Q:  Are there subjects that should not be the subject of comedy?

Cloris Leachman:  I don’t think so.  No, that’s how you get through them.  If you find the humor in things, it saves people’s lives. My phrenic nerve was overextended for about 5 years.  My son was my manager and he’s so funny – really, really funny, and his timing is exquisite, it’s perfect – so I would laugh so much with him that my phrenic nerve got out of hand.  Once it hooks in it just keeps laughing.

Q:  After playing so many great characters in your career, how much of a challenge was it to be different with Maw Maw?

Cloris Leachman:  It was just easy as pie the first year.  The second year, Greg said “this year, you’re not going to have …” What is it that I have?  It’s not Alzheimer’s. Yes, dementia.  Good for you.  Dementia.  So I did that second year, but I wasn’t comfortable with it.  I couldn’t find myself, I really couldn’t.  I didn’t know who to be because I was a little too aware and knowledgeable and with-it.  I still had funny lines, but my character, I didn’t think, was as interesting as the first year.  Third year’s the same thing.  Let’s hope we have a fourth year and I find out.

Q:  When you were a young girl, before acting, what did you dream you’d be doing at this age?

Cloris Leachman:  When I was 14, I had to make a list of what I would like to be in school.  I’d been taking piano lessons from Andy Williams’ aunt, Cornelia Williams Hurlbut, and I loved her with all heart.  I even did a game show once and I won a piano for her, and I gave it to her. That was my great happiness.  I don’t know how much she taught me, but we talked all the time, just talked constantly together, just so interested in her and that she loved me.  She sent me somewhere in Iowa to a place where all the best students are sent to compete, really with themselves.  Anyway, I got the highest score, which was the superior rating.  I loved the piano.  I never practiced it, just with my heart, I just loved it.  I would just touch the piano and it was as if something from Heaven came into my body.  So I was either going to be a concert pianist – but I decided I couldn’t do that because I was definitely going to have children and they wouldn’t let me play and that’s really true, too.  Or a social worker, but I do that in my work anyway. I’m always rubbing people’s backs or telling them what to eat or taking their cigarettes out of their mouths.  Or I was going to be an architect or marry an architect.  In my day, when I was little, women weren’t architects.  But I’ve done architecture in every home I’ve ever been in.  Right now, I’ve bought a new house in Topanga Canyon, but I can’t live in it probably till June.  It’s clear down to the studs.  It’s just beautiful and I love it.  I’m very thrilled with what they’re doing so far.  It’s sort of a hobby.  What else?  There were four things, but I don’t remember the fourth thing.

Q:  Since the show is so hilarious, do you have fun behind the scenes?  Do you all play pranks on each other or anything like that?

Cloris Leachman:  There’s not much time.  We’re very aware that we’re probably behind and going to have to work late and we have our own places to go to the minute they say “cut”.  We either know we’re going to do another take and we get ready for that or we go back to our dressing rooms or we go and eat something or look for something to eat and find it.

Q:  What’s your relationship like with the other characters on the show?

Cloris Leachman:  Wonderful.  I made Martha awfully mad for a long time because she said “You ruined it” and I did.  It was not willingly, it was entirely by accident.  For instance, one night there was an award show and I was invited and she couldn’t be there and she won an award.  They were going right by it, she’s not here, so I tore up onto stage and accepted the award for her to give our show more publicity, which I thought we were not getting enough of properly.  I accepted the award but I don’t know what I did, for sure, that may have made her mad, but I did something that was not right.  So we had to work through that and we have.  I am the best back rubber in the world for a nonprofessional and she loves my back rubs, and she thinks I have a real talent for it.  Anyway, I think we really love each other now.  I had to work really hard to earn her respect and forgiveness, but I think I did it.

Q:  You’ve taken on a ton of different characters throughout your career.  Is there anything that you’ve been surprised to learn about yourself by playing Maw Maw?

Cloris Leachman:  I think there were body parts on myself I hadn’t even seen and I can’t see.  But I’m sure that millions of people will see shortly.

Q:  The comedic timing is excellent on the show.  Do you feel there’s a formula for good comedic TV?

Cloris Leachman:  Once on the Carol Burnett Show, Bob what’s-his-name was trying to make the other guy laugh all the time and he’d just crumble him.  The audience couldn’t wait to see him helplessly turned into a helpless fool laughing.  What were their names?  I can’t even remember.  Bob…?  Well everybody knows.  That was awfully funny, I thought.

Q:  Do you guys have a lot of that on set, trying to make each other laugh?

Cloris Leachman:  Garret’s really funny.  He’ll do something that’s completely surprising in some reaction and I just go south.  He’s so funny.  I think we all respect each other very much and look forward to the scenes we’re going to do to see what each one is going to do with it.  It’s amazing how we fall into it instantly, though.

Q:  What’s your favorite part overall working on the show?

Cloris Leachman:  Oh, being half naked or wearing a bra or something.  My favorite part is finding out what the other guys are going to do when they do their parts.