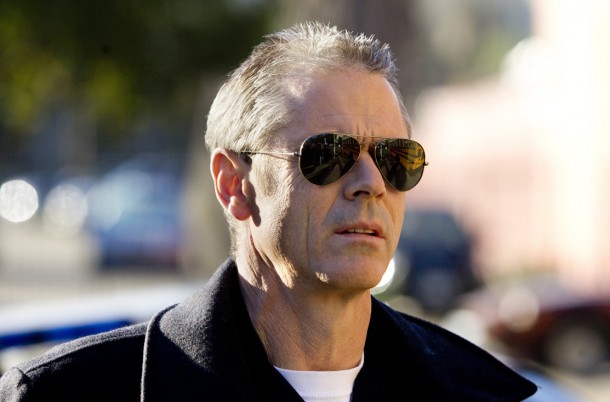 I spoke with the brilliant C. Thomas Howell, who plays Officer Dewey Dudek, about the new season of SouthLAnd.  It was an honor to be able to speak with him and learn about what makes my favorite character tick.  Dewey is the comic relief of the show and I think he’s just misunderstood.  He would take a bullet for you, just don’t expect him to take your feelings into account.  Dewey isn’t even close to being politically correct and that’s why we love him.  He spurts out some pretty vile statements but deep down you know that he’s just in need of a cuddle. Don’t miss the spectacular season premiere of Southland on Wednesday night at 10 on TNT.

Lena:  I watched the first two episodes of the new season last night and they were wonderful.

C. Thomas Howell:  Good.  I haven’t seen them myself and I’m looking forward to it.

Lena:  Your character has some of the best lines.

C. Thomas Howell:  You know, my character probably has some of the most freedom for being able to do that.  Generally, I’m not in a story changing or plot changing place with my dialog.  I have a little bit more freedom to be able to ad some zing or some spice to what I’m trying to say because a lot of times I’m telling a joke or a story or I’m belittling somebody in a particular way somehow and I have the freedom to be able to roll up my sleeves and do that differently from take to take.  I think it makes Dewey a little more tolerable to play.

Lena:  How far is too far for him?  Is there a line that you think Dewey wouldn’t cross?

C. Thomas Howell:  Well, you saw the second episode and I’ve got to tell you for the first time when he’s, and again I don’t want to give a lot away to the viewers, but when Cooper (Michael Cudlitz) is dealing with the young lady who comes in and gives him the muffins, there was a line there with some questionable behavior from Dewey there.  That’s when I just have to trust the moment and go for it but when he’s talking about banging a girl with Down syndrome that’s like holy shit.  What have we done?  I haven’t seen the episode so I don’t really know what was used there.  Do you know what I’m talking about?

C. Thomas Howell:  That was a real delicate and tough issue and I don’t know how much they used of it but that’s crossing the line a little bit there.  I don’t know, Dewey’s a racist, a misogynist, he’s a hard drinker, and he has his own views of life but that could be an issue where fans probably have had enough of this guy’s antics.  I’m hoping that they handled it in a way that doesn’t make you hate me for life.

Lena:  They did a great job by casting Addie (Jamie Brewer) from American Horror Story. 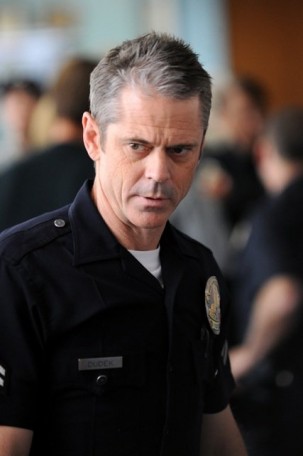 C. Thomas Howell:  She’s a sweet girl and it’s a great moment.  I loved the moment when I ran into her and Cooper and she’s got a crush on him.  She was bringing muffins to him and of course Dewey doesn’t let that moment fly.  He just has to beat the hell out of Cooper over it like he does with everything else.  The relationship between this young lady and the LAPD and her wanting to be with Cooper, I thought it was just so well written.  Apparently, it really happened our writer, Heather, on that particular episode.  She is married to a cop and that really happened.  An experience with them and a young lady came down and she started taking a shine to one of the police officers and starting coming down with baked goods.  I just thought it was so touching.  The whole idea behind it was amazing and of course Dewey had to pee in the pool with that.

Lena:  He certainly always speaks his mind.  You have a new partner this season, so what does it take to be Dewey’s partner?

C. Thomas Howell:  It’s interesting because I don’t really have a single partner, so to speak, because Dewey is a training officer so he goes through a couple of boots, which is probably frightening that he’s a field training officer with the way he handles things.  That’s also been a great vehicle for me to just be able to have these new people come in a go through what they go through with Dewey.  That has really been a great part of the story.  It’s episode three, which you haven’t seen, where you really get to see how Dewey handles his boot.  It’s funny because there is a fine line between his veteranship and his old school qualities and crossing that with the new digital age that we live in. It presents a real issue for a lot of the old veterans on the real life police force.  I think it’s a real challenge for these guys to keep their mouths shut when they would like to be cracking heads and running with things.  You really have to be much more diligent and careful with the age that we live in, and I think Dewey struggles with that.

Lena:  He may not be politically correct but he is an amazing cop.

C. Thomas Howell:  You know that’s the thing.  That’s what I’ve loved about playing him, as a character.  A finding of that struggle between Dewey and he couldn’t care less about what anybody thinks about him.  I really pulled that from my father.  My father is an old school guy who is an amazing team player and at the same time has some qualities and says certain things that just make you cringe, but he would take a bullet for you.  That is really what Dewey is about and that’s what I really love about playing this character.  He’s honest to a fault.  He doesn’t care what people think about him but at the end of the day he would take a bullet for you.  There are not a lot of people that would do that.

Lena:  Do you think that his constant joking is the way that he deals with the pressure of being a cop?

C. Thomas Howell:  Yes.  There are a few cops that I’ve met that are that way that spend a lot of time on the set.  I think, to a certain degree, that you get burnt out and it’s almost a way to keep alive.  It’s how Dewey gets through his life otherwise you would just burn out and shut off.  You’re dealing with dead bodies and the situations that the cops are put in on a day-to-day basis by making these decisions constantly.  Again you never know, in real life as police officers, whether you are walking into your last moment on this planet or if it is going to be another boring day.  You are constantly living on the edge; you never know what you are going to be dealing with. You are constantly put into a position where even if you pull your gun, do you pull the trigger or do you not pull the trigger?  Are you going to kill somebody or are you going to get killed?  Living your life on a day-to-day basis like that is so difficult.  I know that we are all comfortable behind our computers, Xboxes, and cable television but when you are really put out into the field and you are making life or death choices constantly, or worse, you are dealing with pure boredom.  You are riding around in a car and waiting for something to happen, both are just a very difficult way of life.  I think Dewey’s humor gets him through the day-to-day antics.

Lena:  What do the fans have to look forward to from Dewey and Southland in general?

C. Thomas Howell:  It’s funny because as I have said before and I like to say that Dewey is like cayenne pepper, a little bit of Dewey goes a long way.  Too much cayenne pepper wrecks the whole meal.  He’s still a bit of a loudmouth.  There is still a bit of comic relief that Dewey can provide but there are also some very dangerous situations that he’s put into where he has to make some real responsible decisions.  That is the thing about Dewey, I think this season he is a little more focused on being a better cop and being a better person.  He deals with some life or death situations in his own accord.  He’s trying to become a better man for it.  There is a real growth with Dewey trying to become a better person this season, within the box of his – he’s still who he is.  There are a lot of people who think Dewey is just a complete ass.  He’s trying to become a better person this season [laughing].  I think you’ll see that arc as we go through episodes 1-10.