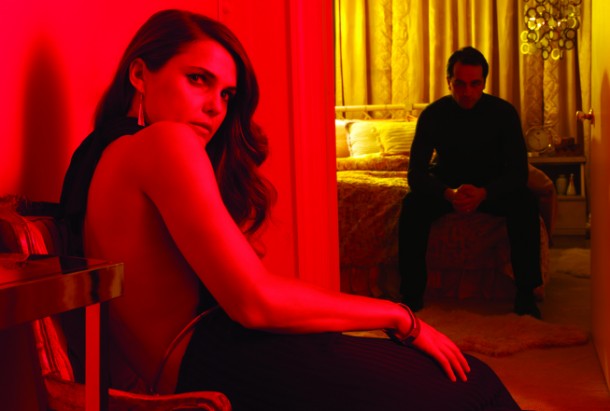 With the Season One Finale Scheduled for May 1

LOS ANGELES, FEBRUARY 21, 2013 – FX has picked up its critically-acclaimed drama The Americans for a 13-episode second season, it was announced today by John Landgraf, President and General Manager, FX Networks. The most recent drama to join the network’s coveted roster of hit original series, the renewal comes just four episodes into The Americans’ freshman season. There are nine all-new episodes remaining in the current season airing Wednesdays at 10:00 PM E/P with the season finale schedule to air on May 1.

“The Americans has quickly established itself as a key part FX’s acclaimed drama line-up,” said Landgraf. “Executive Producers Joe Weisberg, Joel Fields and Graham Yost and their collaborators are telling riveting and deeply emotional stories and the performances of Keri Russell, Matthew Rhys, Noah Emmerich and the entire cast are simply outstanding. The show is truly worthy of its widespread critical acclaim and we are confident that its quality will continue to yield a robust and passionate audience.”

“We’re very grateful to John Landgraf, Nick Grad, Eric Schrier and everyone at FX for their unwavering support of our show,” said Weisberg. “We’re thrilled to be able to continue writing stories for such an incredibly talented cast led by Keri, Matthew and Noah. This has been an amazing experience for me and it couldn’t have happened without the tireless efforts of our cast and crew. We appreciate the support of the audience and we believe they have a lot to look forward to the rest of this season.”

Fields added, “Working with Joe Weisberg, Graham Yost, Josh Brand, Adam Arkin, our writing staff, and the brilliant cast and crew has been a blast and I’m delighted we get to keep doing it. We couldn’t have made it happen without the constant support of Justin Falvey and Darryl Frank at Amblin TV, David Madden at Fox Television Studios and Eric Schrier at FX Productions and their wonderful teams as well.”

In next week’s fifth episode, “Comint” – (Airs February 27, 10:00 PM E/P), a crucial agent crumbles under emotional distress and threatens to topple a valuable network of KGB informants. Professionally, Philip and Elizabeth are tasked with infiltrating the FBI’s new communications encryption system while personally they are forced to grapple with one of the darker aspects of life as a spy. (Written by Melissa James Gibson; Directed by Holly Dale)

Set in 1981 just after Ronald Reagan is elected president, The Americans, starring Keri Russell, Matthew Rhys and Noah Emmerich, is a drama series about the complex marriage of two KGB spies posing as Americans in suburban Washington D.C. Created and Executive Produced by Joe Weisberg (Falling Skies), a former CIA agent who went on to become an accomplished author, Joel Fields and Graham Yost are also executive producers, along with Amblin Television heads Justin Falvey and Darryl Frank. The Americans is produced by Fox Television Studios and FX Productions.

In celebration of the series renewal, FX will air a marathon of The Americans, showing the first five episodes back-to-back on Friday, March 1 beginning at 10:00 PM E/P:

Episode 1 – Pilot – (Airs 10:00 PM – 11:32 PM E/P) – The Americans is a period drama about the complex marriage of two KGB spies posing as Americans in suburban Washington D.C. shortly after Ronald Reagan is elected President. The arranged marriage of Philip and Elizabeth Jennings grows more passionate and genuine by the day, but is constantly tested by the escalation of the Cold War. Tensions heighten upon the arrival of a new neighbor, Stan Beeman, an FBI agent. (Written by Joe Weisberg; Directed by Gavin O’Connor)

Episode 2 – “The Clock” – (Airs 11:32 PM – 12:35 AM E/P) – When Philip and Elizabeth are given an urgent task to plant a bug in Defense Secretary Caspar Weinberger’s office, they risk exposure when an unwilling maid of the Weinberger home refuses to cooperate. Stan closes in on a member of the Soviet Rezidentura in an effort to uncover the identities of deep cover Directorate S operatives. (Written by: Joe Weisberg; Directed by: Adam Arkin)

Episode 3 – “Gregory” – (Airs 12:35 AM – 1:36 AM E/P) – Philip and Elizabeth discover that their murdered colleague Robert had a wife they never knew about. As they try to determine what she knows and where her allegiance lies, Stan’s investigation into Robert’s death puts him hot on their trail. (Written by Joel Fields; Directed by Thomas Schlamme)

Episode 4 – “In Control” – (Airs 1:36 AM – 2:36 AM E/P) – When an assassin attempts to kill President Reagan, Philip and Elizabeth scramble to handle the fallout within the KGB. Meanwhile, Stan pressures his source within the Rezidentura to find out if the KGB was responsible for the attempted assassination. (Written by Joel Fields & Joe Weisberg; Directed by Jean De Segonzac)

Episode 5 “Comint” – (Airs 2:36 AM – 3:36 AM E/P) – A crucial agent crumbles under emotional distress and threatens to topple a valuable network of KGB informants. Professionally, Philip and Elizabeth are tasked with infiltrating the FBI’s new communications encryption system while personally they are forced to grapple with one of the darker aspects of life as a spy. (Written by Melissa James Gibson; directed by Holly Dale)