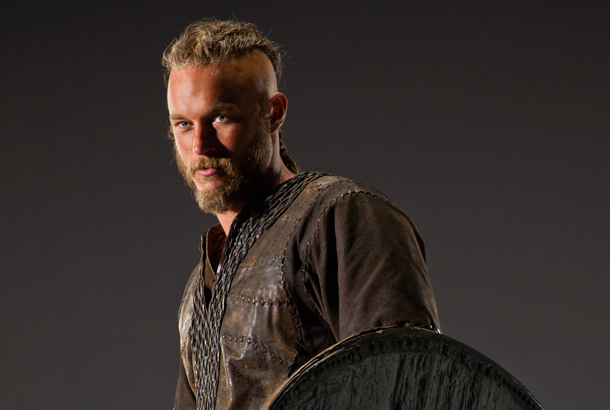 I spoke with the eloquent Travis Fimmel about VIKINGS, his magnificent new series that is premiering this week on History. I can’t even begin to tell you how much I adore this series.  It is another visually stunning masterpiece by Michael Hirst. Travis portrays Ragnar Lothbrok and his character is based on an actual historical figure. He is brilliant on the series and I hope that this will finally give Travis the recognition that he deserves.  He’s one of the most underrated actors of our generation. His work in The Beast with Patrick Swayze was unforgettable.  Their chemistry was unmatched and so beautiful to watch.  You have to check out the series if you haven’t done so yet. It was an absolute honor to speak with him.  Do not miss the premiere of Vikings on History Sunday, March 3rd at 10:00 pm, 9:00 Central time.

Lena Lamoray: You are brilliant as Ragnar on the show.

Travis Fimmel:  Oh, that’s very sweet of you to say.  Thank you.

Lena Lamoray: You’re welcome. Vikings, being a period drama, did it offer any particular challenges as an actor compared to being on a contemporary show like The Beast?

Travis Fimmel:  No. It made it more exciting, you know? We’re placed in a different world and the sets were amazing. And it was beautiful locations and it made it fun in a way, you know? We’re not stuck in a studio or on the same set that you work every day.  It was really – it was fun. Every day we were at a different location and it was absolutely gorgeous country and getting rained on all the time. It was a bit annoying. But no, it was great. I’m a farm boy so it was so great to be outdoors and…((inaudible)) this experience.

Lena Lamoray: Can you talk about working with the cast?

Travis Fimmel:  …and everything is great working with them.

Lena Lamoray: Can you talk about Ragnar’s conflicting relationship with the Earl?

Travis Fimmel:  Yeah. I think Ragnar really looks up to the Earl but the Earl is set in his ways and he’s happy with how his life’s going. But Ragnar wants to have more. And by being the Earl you get to choose where their boat’s going and where the whole village goes.  And Earl Haraldson doesn’t want to go where Ragnar goes so Ragnar has to do it behind his back. And he is one of the first people ever to sail west to the East of England. 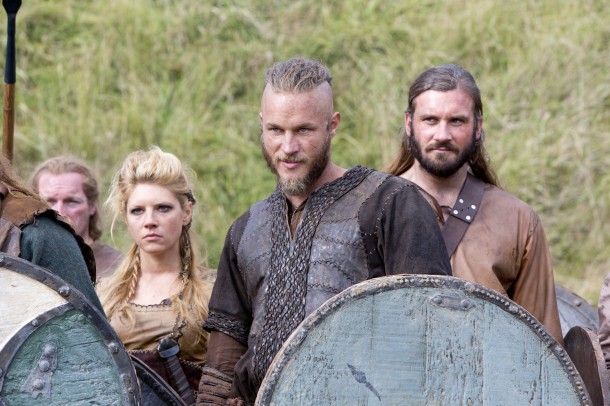 Travis Fimmel:  We had an amazing stunt coordinator and stunt team. I’m actually not that fit and that’s why I have my shirts on all the time. But it was – yeah, stunt guys are amazing. They choreograph stuff so they made it really easy for the actors to do all of the action stuff.

Q:  So there was no special training or a certain kind of fighting?

Travis Fimmel:  No. We just learned it on set, you know? I got the job a week before we sort of went to Ireland so I didn’t have time to do all of the training stuff that the others did. But…once again it was choreographed so good that it was pretty easy.

Q:  How did you come to an understanding of what Viking men were truly like back then, beyond just their violent nature?

Travis Fimmel:  Well the creator Michael Hirst and writer was amazing. He gave us a lot of background on everything. And I guess it’s just our job, as actors, to humanize it and make it relevant to people today and give them something that they can grab a hold of, you know?  It’s like everybody’s got families and brothers and every family has their own conflicts and that – my character Ragnar is very ambitious like a lot of people and he’s just trying to make a better life for himself, you know?

Q:  Was there anything about this role that wasn’t scripted for you that you added to the character?

Travis Fimmel:  Well ((inaudible)) so amazingly that everybody had ideas on everything, you know, and it was so collaborative. So from the look, you know, the hair and makeup were amazing and everybody had input and yeah, it was such a collaborative spirit, you know?  It’s not one thing was one person’s idea. So it was a real team effort there which is why it was so enjoyable to work, you know, with the crews and Michael Hirst, the creator, is such an amazing writer and it’s very – yeah, it’s very creative.

Q:  So you had input into the look and the outfit of the character?

Travis Fimmel:  Yeah, for sure. Actually I had short hair and they put extensions in and ((inaudible)) the sides and that stuff. Yeah, we just wanted to be different. We wanted everybody to feel like they were in a different world. So we didn’t want contemporary stuff in there, you know?  But there is contemporary as in the feelings that the – or the family issues that the Vikings experienced are very similar to ones that go on now, you know? Then we had so much adventure and violence and that where it’s a really different world. But the basic human nature is the same.

Q:  You talked a little bit about some of the training but can you talk more specifically about maybe any stunt scenes you had or working with the weapons, something like that?

Travis Fimmel:  There are a lot of fighting scenes in the series. It was – we had a great swordsman that showed us a lot of different styles of fighting. And we all sort of took in our own little style. It was very fun and it’s great when you don’t have to remember lines. So I really enjoyed the action stuff.

Q:  What was the most surprising thing that you learned about the Vikings?

Q:  What drew you to this role and to the show itself and what made you decide to be a part of it?

Travis Fimmel:  Well like anybody I was – you’ve heard about the Vikings and legends and that about them and I’ve never actually seen a show that was about them. So I thought it would be a great experience to do something that hasn’t been done. And it’s such an amazing writer and show creator.  And yeah, it’s just I’ve never seen that sort of stuff so I wanted to be a part of bringing that to the entertainment world. 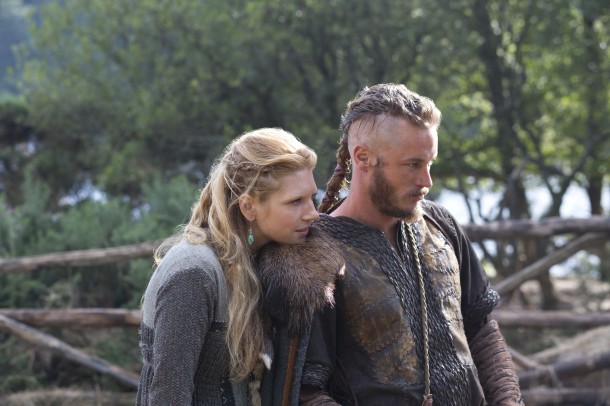 Q:  When you first got to get on the set and since you only had a week before you went to Ireland, what did Michael tell you about how to approach Ragnar as compared to the script?

Travis Fimmel:  He just said to humanize it, you know, make people relate. You know, and he knew a bit of my history with family stuff and I told him about my brother and that sort of stuff.  And he said oh, just bring all of that to the character and really make the audience relate to the Vikings because they’re human beings like everybody else. And there’s such a myth about them just raping and pillaging and, you know, the myth is that they’re very simple people.  But they’re actually very knowledgeable people, very curious and they did amazing things with the resources that they had.

Q:  What were some of your favorite moments from filming Vikings?

Travis Fimmel:  My favorite moments have to be the boat stuff. They built two boats actually for the show and there were a couple of rivers we went with – it was actually we had three boats and just rowing up the rivers and we’re all rowing and it was the middle of the morning, very misty.  It just felt very authentic, you know? And then I like the fight scenes because you don’t have to remember lines.

Travis Fimmel:  I was just happy I had a job. No, it was great. It was a privilege, you know, and everybody made it very easy. You know, it’s such a great script. I would have been very dumb not to have done it. And no, it was great. It was great to investigate that guy and such a courageous fellow.  It’s just amazing what the Vikings did back then.

Q:  The character that you played is based on a real person. I know there was obviously nobody who knew him but did they give you any information?

Travis Fimmel:  Yeah, it was thought he was a direct descendant from a God named Odin who was Lord of the Slain Warriors and Curiosity. And legend has it that he actually killed himself – hanged himself just to see how death felt. And I think Ragnar’s got that same curiosity.  You know, he doesn’t – he never settled for anything. And he’s just a very, very ambitious person and he’ll do anything to learn more about the world and sacrifice anything to discover new civilizations, you know?

Q:  He seemed different than his brother.

Travis Fimmel:  Yeah. He’s – as far as he’s like anybody – his brother’s like anybody that gets comfortable in the life they are and they’re happy in their little ((inaudible)). Ragnar always wanted more. He didn’t want to just be a farmer and he knew there was more out there to see in the world.  And it creates a lot of conflicts with the older order of the village because they’re happy with they are but he wanted to discover new worlds.

Q:  After growing up on a farm in Australia, did that make this experience more relatable for you at all? Like how was it when you got over there?

Travis Fimmel:  It’s a lot greener than where I grew up that’s for sure. It’s a beautiful countryside and they obviously get a lot more rain than we do. But no, it makes our jobs at least a lot more enjoyable for me because I like the outdoors and it’s a little bit better paycheck than what you get on a farm.  I have the best of both worlds.

Q:  So how are you most like and most different from your character?

Travis Fimmel:  I look like him.  I’m similar in a lot of ways I guess. I am very curious about stuff and I want to do well for myself. How am I most like – I love my family I guess. Most like stuff. That’s a good question. Ask somebody else that question. I don’t know the answer.