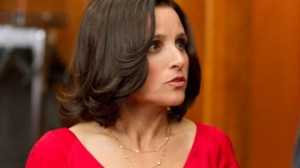 With midterm elections looming, Vice President Selina Meyer is scoring higher ratings than the president in several popularity polls, which she hopes will boost her influence and help her curry favor with the chief executive. But as she knows all too well, even the most banal action can set off a ripple effect that has unexpected, far-reaching – and often disastrous – consequences.

The Emmy®-nominated comedy series VEEP kicks off its ten-episode second season SUNDAY, APRIL 14 (10:00-10:30 p.m. ET/PT), exclusively on HBO. Created by Armando Iannucci (Oscar® nominee for co-writing “In the Loop”), the show stars Emmy®-winner Julia Louis-Dreyfus as Selina Meyer, who becomes vice president, only to discover the job is nothing like she expected, but everything she was warned about.

VEEP follows the whirlwind day-to-day existence of Vice President Meyer as she puts out political fires, juggles a busy public schedule and demanding private life, and defends the president’s interests, even as she tries to improve her dysfunctional relationship with the chief executive.