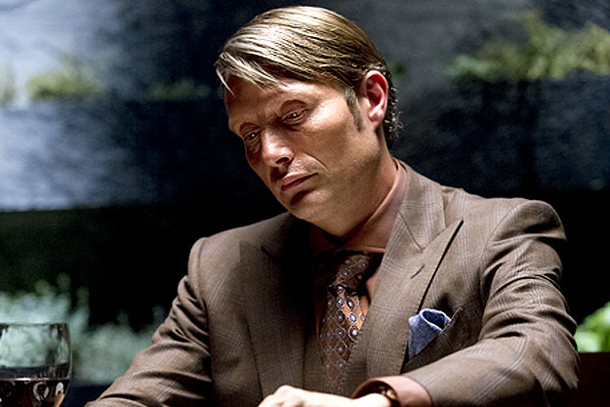 Hannibal premieres tonight on NBC.  My initial thoughts regarding Hannibal was that it was either going to be extraordinary or dreadful.  It’s not a middle-of-the-road type of series.  I’m happy to report that the series was done properly and is, in fact, spectacular.  It starts out strong and five episodes in, you still have that original nervous knot in your stomach that makes you yearn for more and more. That is a telltale sign of a brilliant series or perhaps all of the edible delights just got to me.  I can tell you one thing, this series will not make you hungry.  I found myself flinching every single time food was involved.  You do not want to miss out on that feeling, so check out the premiere tonight on NBC.  Bryan Fuller does a phenomenal job making you want to invite Hannibal into your home every Thursday night.

Hugh Dancy plays Will Graham, a criminal profiler that has an “active imagination” and sees things in a very specific way.  He is able to visit a crime scene and pull things from it that no one else can see.  “This is my design.”  Will is more comfortable speaking at people rather than with them.  There are so many stunning visuals when Will “sees” things.  So much time and effort was put in to make sure that the effects were fluent and flawless.  It also doesn’t hurt that David Slade directed the premiere.  I’m a huge fan of his work.

Agent Jack Crawford (Laurence Fishburne) approaches Will to ask him for his help.  His unique way of viewing things is needed to help track down a killer.  “What kind of crazy is he?”  They are on a hunt to find the “golden ticket” before it’s too late.

When Will goes with Crawford to meet with the family his questions put everyone on alert.

Dr. Alan Bloom (Caroline Dhavernas) doesn’t like the way that Crawford is using Will.  She respects Will and is afraid that he is going to get hurt if he gets too close.

Crawford seeks the assistance of Dr. Hannibal Lecter (Mads Mikkelsen) per Dr. Bloom’s recommendation. Hannibal’s first meeting with Will is significant.  “You won’t like me when I’m …” Hannibal understands him more than he knows.  You find yourself growing rather found of him until you remember that he’s THAT guy.  He’s courteous, I’ll give him that.

One of my favorite scenes with Crawford and Graham happens in the men’s room because I’m pretty sure that guy never made it to the other room.  By the way gentlemen, have I been missing out?  That is one nice looking men’s room.

I can’t say enough good things about Hannibal.   The cast is perfect and the stories will certainly keep you coming back every week.  Hannibal puts a refreshing spin on the “typical” crime procedural that you’ve come to expect.  They take on different cases with unexpected twists and turns.  Next week’s episode is truly terrifying.  I love horror and I’ll admit that it was very disturbing episode.  Eddie Izzard is also in the fifth episode.  How much more do you need from a show.  Do not miss the premiere of Hannibal, tonight at 10/9c on NBC.