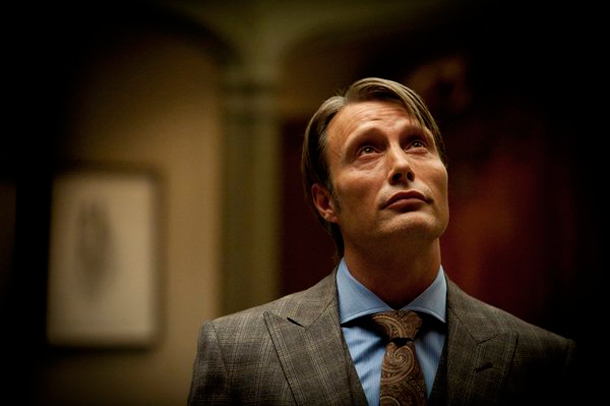 Last week’s premiere of Hannibal was only the beginning of what this intriguing series has in store for us.  Tonight’s episode is one of the most terrifying, yet visually stunning, episodes that I have seen so far.  The magnificent visual elements of this series can’t be praised enough.  When so many shows go straight for the overproduced computer-generated rubbish, Hannibal takes its time to explore the intricate details of every situation.  “Amuse-Bouche” – Hannibal gets closer to Will, while an underground killer pushes Jack and his team to their limits.

As Will Graham (Hugh Dancy) struggles with the death of Garret Jacob Hobbs, he is uncomfortable with the “inappropriate” way that the people around him are behaving.  He is having hallucinations, and Dr. Hannibal Lecture (Mads Mikkelsen) poses some questions that he may not want to actually know the answers to.  Will has no problem expressing his discomfort to Dr. Lecture.

Agent Jack Crawford (Laurence Fishburne) is really demanding about the one thing that he wants, so hopefully Graham will come through for him.

A couple of boys make a grisly discovery in the woods.  If their discovery doesn’t disrupt your sleep tonight, you have no soul.  When Will sees things his way, the beauty and repulsiveness are unearthed. 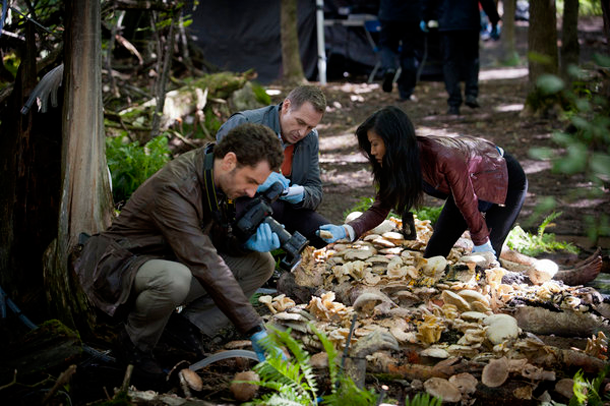 Ms. Lounds (Lara Jean Chorostecki) does what she does best, but may have met her ultimate match.  How far will she go?

Dr. Lecture has a nice sit-down with Jack where they discuss Will, his mother, and another invitation is placed on the table.

Get ready for Jimmy Price’s (Scott Thompson) big reveal.  I’m so happy that Scott is in this show.

What they discover in tonight’s episode will really make you question something that you probably never think twice about.

Will realizes something about his relationship with Dr. Alana Bloom (Caroline Dhavernas).  She wants him to see what Abigail Hobbs (Kacey Rohl) is to him.

A very bizarre connection comes into play that involves an unimaginable concept.

This is just a superb episode.  Hannibal is one of the few series on television that is capable of evoking powerful emotional responses.  When you watch Hannibal you respond.  It’s not a background show.  I truly admire a series that can do that.  Do not miss an all-new episode of Hannibal tonight at 10/9c on NBC.  You will not be disappointed.