After enlightening us with Walking on a Dream, the long-awaited second chapter from Empire of the Sun, Ice on the Dune, has arrived.  It will be released in its entirety on June 18.  Their first single, “Alive,” is just a small sample of the transcendental journey that you will be taken on.  Empire of the Sun’s music is a thing a beauty and with all the hardships in the world, it’s beauty and peace that we desire the most.  The Australian duo of Luke Steele and Nick Littlemore are musical magicians that know exactly how to make your problems disappear, even if it is only for a short time, they get you to shift your focus and that almost always results in raised spirits.  How can you argue against that?  I challenge you to listen to Ice on the Dune without tapping your feet.  It takes over and you just can’t help it.

Ice on the Dune is pleasant listening from beginning to end.  Their influences are vast and every time I go back to a song, it’s like I’m listening to it for the first time.  You will find yourself always discovering something new.  I love albums like that.  That is the mark of a truly exceptional album.  In the recent years, the only albums that have had that effect on me have been Walking on a Dream, Sound Awake by Karnivool, This Is the Warning by Dead Letter Circus, and For Your Entertainment by Adam Lambert.  I’m highly fond of multidimensional artists that bring a unique life to their creations.

The album begins with a short intro and then the heart of the album begins to beat.  “DNA” really sets the mood and pace for what is to come.  “Alive” is the first single that they released and if I had to pick a second hit I would say that “Celebrate” would be it.  It’s the perfect example of a retro roller-disco anthem. “Concert Pitch” has that classic The Cars vibe.  One of my favorite songs on the album is the final track “Keep A Watch.”  It is very David Bowie, Labyrinth Soundtrack Bowie.  It’s haunting and hypnotic.  I can’t listen to it without imagining David Bowie as Jareth the Goblin King, or maybe it’s the lure of those tight pants; you can’t forget those pants.  If they ever decide to remake Labyrinth, Empire of the Sun would be the perfect band to provide the soundtrack. 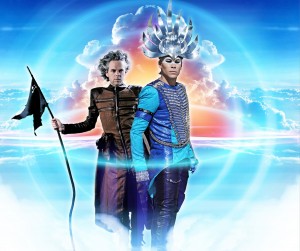 “I’ll be Around” and “Surround Sound” are also my top picks.  “Surround Sound” is probably the funkiest song on the album.  That brings me to my only complaint about the album.  I was looking for a “Swordfish Hotkiss Night” track.  When Empire of the Sun brings the funk, they bring the funk.  That’s the only reason why I have to bring it up because I feel that we were denied that special treat.  That being said, I still can’t stress how incredible Ice on the Dune is.

Luke Steele and Nick Littlemore are a brilliantly talented duo.  They know exactly what works for them and how to work together to create that unique sound. I haven’t been fortunate enough to see them live, so I’m hoping that they will make it to my area soon.

I picked out a few of my favorite tracks, but there isn’t a bad one on the album.  Ice on the Dune will speak to you.  All of the songs are upbeat and focus on love, guidance, inclusion, support, and so much more.  This album is a celebration of life.  I will warn you that after a few listens, this album will quickly become the soundtrack of your dreams.  My nightmares about Michael Shannon have become a thing of the past.  Even Michael Shannon can’t yell at me when Empire of the Sun is playing.  Thank you, Empire of the Sun.  I owe you dearly.

Purchase Ice on the Dune everywhere on June 18.  You will not regret it.  This is the best album that I’ve heard this year.