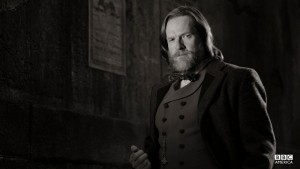 Don’t miss an all new episode of Copper Sunday, June 30 at 10/9c only on BBC America.

“Two dead, five missing… I can’t have a repeat killer hunting my streets. Let’s not let the body count get any higher, hmm, detective?”
This week, as more corpses of young men are found and others continue to disappear, Detective Corcoran (TOM WESTON-JONES, MI-5) leaves no stone unturned in his search for answers. General Brendan Donovan (DONAL LOGUE, Sons of Anarchy, Vikings) employs unseemly tactics to keep the murders out of the press.

Meanwhile, as Sara (TESSA THOMPSON, For Colored Girls…) readies herself to attend a dinner with Frederick Douglass (guest star EAMONN WALKER, Chicago Fire,Oz) at the Morehouse mansion, Doctor Matthew Freeman (ATO ESSANDOH, Django Unchained, Elementary) makes a drastic decision for the health of his community — forcing her to confront her past.

And with his fate decided, Detective Maguire (KEVIN RYAN, Tripping Tommy, RAW) must fend for himself and realign his allegiances.