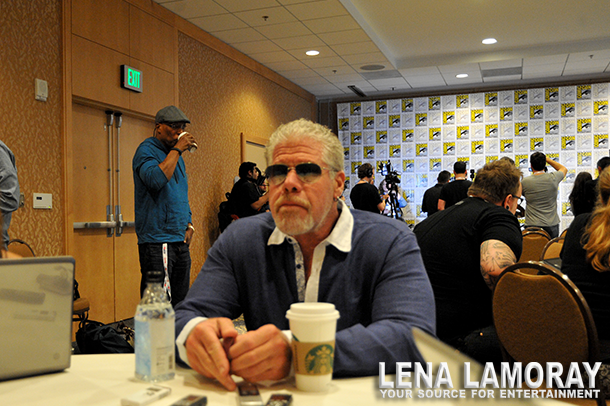 Ron Perlman discusses Clay’s future on Sons of Anarchy.  Clay Morrow has lost everything and how he chooses to live out the rest of his life is only partly up to him.  He has made some very bad decisions along the way and now it is time for him to pay.  He has a price on his head and nothing left to lose.  What path do you think he will choose?  Don’t miss the season six premiere of Sons of Anarchy on September 10 on FX.

Ron Perlman:  My challenge is that the rules have completely changed and it’s very uncomfortable when you sign on for a show and you sit at the table and you are part of this family, not only a part of it but you are a pretty vital part of it as President, and you go home and you’ve got this old lady who loves you and you love her and you have the respect of the community and this and that and now I’m playing a guy with nothing who every moment of his life could be the last.  He’s in jail.  He has no country, no family, no possessions; every single thing that he has worked for in the entire trajectory of his life has been taken from him and there is a five million dollar price on his head and a lot of mother fuckers that want to collect on that.  I feel like I’ve lost everything as Ron the actor playing Clay I used to hang with the boys, I’d be at the table and then we would ride.  I would be Gemma’s old man and now I’m off in Siberia.   I’m in complete exile.  I’m completely alone.  My interaction with them is very limited.  I’m no longer part of that world.

Ron Perlman:  That’s what is going to play out.  The audience doesn’t know which way he is going to go.  I don’t really like revealing too much because the fun of it is to watch what he chooses, in terms of the limited amount of choices that he has.  He has no control left of his future, of his own life.  It’s completely in the hands of other people -To the degree that he has any control whatsoever, is he going to go spiritual, is he going to go revenge, is he going to be on the high ground or the low ground?

What Kurt has told him about Clay’s future:

Ron Perlman:  Very little.  In fact, I had to go on twitter to find out more than I have found out during the last three months on the set.  On twitter, I guess he does these Q&A’s every week and he was asked to say one word that describes every character’s season six reality and for me he wrote redemption.  That’s my clue and your clue, but perhaps and he is contemplating losing everything – he’s already lost everything except he’s still alive – he has one thing left.  Now that he’s on the cusp of even losing his life, maybe it’s time for him to get his house in order.  Whatever that means.  If there was ever any high ground for him to occupy maybe it’s time for him to try and find that – maybe.

Ron Perlman:  It’s very uncomfortable.  It’s been uncomfortable since season four for me, very uncomfortable.   I’m not playing the guy I signed on to play and I’m completely not in control of what he chooses to do and what happens to him as a result of that.   For me, I’m a bit of a control freak and I don’t like being as hated as I’ve become on the show, but that’s the gig.  I think my conclusion to all this is that what Kurt ultimately wants to do is, at the end of the day when all the dust settles, is that he wants to have exposed all of the facets of power – why you aspire to it, what is the price once you get it, what is does to your insides once you have it, how desperately you try to hold on to it and what you are willing to do, and what will ultimately happen when you become obsessed with retaining power at all costs.  With Clay, you got to see the beginning, the middle, and the end of that, unlike with any other character on the show.  With Clay you get to see the price, the ultimate price of flying too close to the sun.

What he does behind-the-scenes to blow off some steam from being in such a dark place: