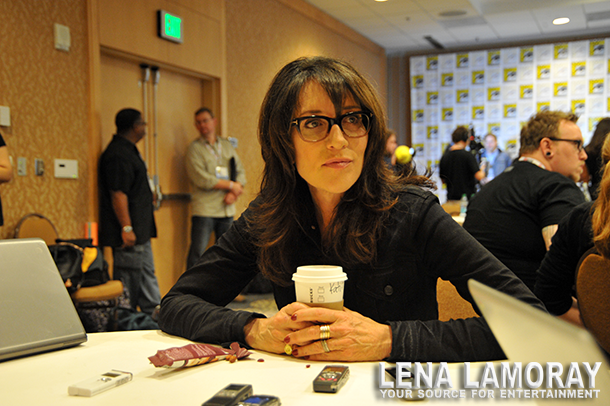 From a mom’s perspective, Clay’s influence on Jax:

Katey Sagal:  Show him what not to do.  I think that’s what he would like to believe.  You’re going to see Jax go through a lot of different [things] – in defining what kind of man he is and what kind of leader he is.  I think it’s really interesting to notice what it is that we are sort of influenced by – unawares and you know how you were a little kid and you say that you are never going to do that because your mom did that and before you know it you are doing that.  You are your mom.  I think that you are going to see a little bit of that and a little bit of stepping aback from that.  He’s definitely his own kind of leader, but he will rub up against all of the parental figures in his life.

Katey Sagal:  She’s pretty happy at the beginning of the season.  She’s got that new boyfriend of hers and that’s working out really fine for her.  She’s resigned to what happened with Clay.  She’s feeling conflicted but not regretful.  I think that in the world that they live in, that you sort of do it and you’re dead to me, kind of.  Not that he’s dead to her but she will definitely have a conversation with him.  The Tara of it all, it will continue to be complicated.  It will continue to be a push and a pull.  I can’t really say a lot about it right now.

Katey Sagal:  I love Unser.  She loves him.  She will always love him.  There will be a shift in that relationship, however.  Tara gets a little closer to him, too.

Katey Sagal:  I’ve done a lot of things on the show that, you know, were certainly things I hadn’t done as an actor yet.  I hadn’t done a lot of sex scenes, not that I’m doing any crazy sex scenes, but crazier than I’ve ever done on camera.  That’s been interesting and a hurdle.  As an actor, the more times you walk through fire and you think I’ve never done that and then you walk through it and you feel good about it.  You look for as many experiences to explore that you haven’t done, so I’ve had quite a few.  I wouldn’t call them difficult.  That’s not a world I would use.

Katey Sagal:  It’s interesting because when I was first in Comic-Con there was none of this TV and movie business.  It’s been fun.  People that love what you do are really nice to meet.

Katey Sagal:  It might be in episode seven.  I have a record coming out.  I’ve been working on my own record and it’s going to come out in the end of September or the middle of October.  I think on my record there will be one of the songs that they are going to use on the soundtrack. We are trying to figure that out now.  I may sing a couple of songs.  There may be a group song that I’m singing, too.  I can’t tell you what it is.  Most of my records, I have two out right now, I wrote most of the songs.  I was sitting around trying to write songs and I was just like I can’t write any songs, so I thought I’m just going to record covers.  I picked songs that most of them are kind of current, a Ryan Adams song and a Ray LaMontagne song that mean something to me.  Then there are songs that I listened to when I was growing up.  There is a Laura Nyro song and a Tom Petty song.  Everything is kind of very rooted in where I’m at basically.  You should buy the record.  You’ll like it.  Every ten years I make one.  It’s interesting because I juggle – I’m a mom I have three kids.   It’s interesting to me because time just sort of flies by but I always like to continue to do what it is I do.  It never seems like it’s been ten years because I’ve been raising children, but it’s been ten years.

Katey Sagal:  Right before I did the panel they asked me if I would do it.  [Laughing.] I got a text from my agent saying oh, by the way…  I was like oh yeah, of course.  I don’t know anything.  I don’t know if they’ve written it yet.