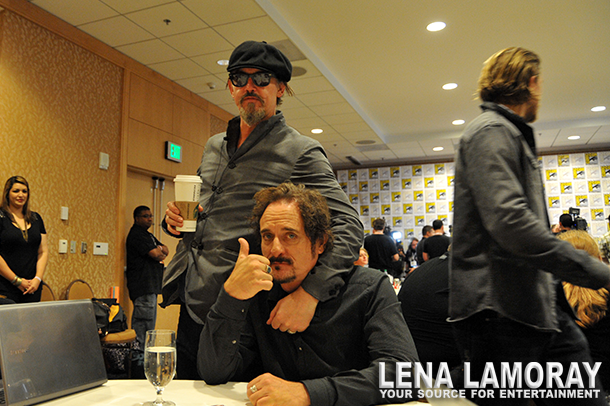 Kim Coates, with a special appearance by Tommy Flanagan, discusses the new season of Sons of Anarchy, Goon, the death of Tig’s daughter, dogs, Venus, playing a priest, and so much more. It’s always so much fun to speak with Kim.  He’s one of the nicest gentlemen that you will ever meet.  I still can’t thank Kim and Mark Boone Jr. enough for staying at an event late just so I could interview them.  They really love and appreciate their fans.  Kim did a phenomenal job making me cry last season.  The scene with Tig’s daughter was heartbreaking.  I loved how Tig came to the aid of the pit bull in the finale.  I’m also so happy that they are making a sequel to Goon.  You have to check out Goon if you haven’t already.  I hate sports but I loved the film.  Don’t miss the season six premiere of Sons of Anarchy on September 10th on FX.

Kim Coates:  It’s my daughter’s death.  As an actor, you can never prepare for something like that.  How do you really wrap your head around something like that?  It was a gift from Sutter to trust me with something like that.  I take acting seriously.  I started on Broadway in A Street Car Named Desire as Stanley.  I was the youngest Macbeth at Stratford at twenty-seven.  I really take my craft seriously, like we all do in this room. I have two daughters in real life.  I don’t even know how I did it. I had never seen it, so for me to be at the premiere last year and on the big screen, and see how it ended up at the end of the show all of my cast mates came up to me and wow…just me and my boy Pope just doing the whole thing.  That was probably the never to be forgotten moment by Kim Coates on this show for me.

Kim Coates:  Last season I said that Tig was sort of off the leash, that was my quote from last season because he was.  His daughter gets killed and that’s it, I’m off the leash.  Fuck this, fuck everything – he’s mixed up, sad, ruthless, hates the fact of framing Clay at the end even though him and Clay were on the outs in a way.  This season I’m back on the leash and it’s Charlie’s leash.  We have issues.  Jax and Tig have issues.  We’ll see if we can sort them out because you’ve seen the poster. It’s mayhem this year.  It’s absolute mayhem! Everyone is fighting for every scrap of something before we all fall into the abyss as a club.  You’ll have to watch and see.

Kim Coates:  I hate it.  I hate not having much to do with him.  [Tommy Flanagan sneaks up behind Kim while he is talking.] This has to be Tommy Flanagan because no one rubs me like that except for the Scotts.

Tommy:  I love him.  I love him.  Bromance!  [We ran out of time in the pressroom before Tommy was able to make it over to our interview table, so it was nice to at least get a visit from him.  Tommy is allowed to contribute to any interviews at any time.  Someone please make an app for that.]

Kim Coates:  Charlie’s got a tough job trying to keep this machine together, so he’s giving all these orders and barking this and barking that.  Who listens and who doesn’t listen?  And who sees him doing the wrong things and tries to get to him?  And Clay’s issues – will August figure out that I killed Pope and not Clay?   How is that going to be resolved?  There is a lot of unresolved stuff.  Now they are on the other side of the mountain with this show.  It is almost over now.  Our fans are going to be very sad, but it’s going to be a really intense ending I’m sure no matter how Kurt does it.

Working with the dogs in the finale:

Kim Coates:  Yes, Bonnie.  I hope she doesn’t ask for too much money this year because I’d love to have Bonnie back.  Bonnie was great.  They were beautiful pits.  They are beautiful dogs.  It was so fun for me as Tig, you know, to have lost my daughter and a crazy season to be able to save that dog.  I loved playing that scene.

Kim Coates:  Crazy right?  He just lost his daughter and he’s lost and then she walks in with that dress and sexy hair.  I was so twisted up.  I told Walton straight up not to do any makeup around me.  Don’t have any breast try-ons while I’m around, nothing.  The first time I saw Venus was that morning, in that room, and I looked at him and I thought holy shit, he’s an amazing actor.  I love Walton.  I had a lot of fun with him last year so we will see what happens this year.

Kim Coates:  I didn’t with Ron.  It must be the most frightening thing that you have ever seen.  Fourteen sized shoe feet, I mean what, with painted toenails.  I hear that it’s just hysterical.

Kim Coates:  I will say that everybody in Hollywood wants to be on this show.   It’s the land of great writing for guest stars.  Sutter really gives them some great stuff.  We love our guest stars.  I’m just proud that we are on a show that people talk about.

Kim Coates:  I have three films opening in the fall.  I just finished a movie called A Fighting Man with Dominic Purcell, James Caan, and Famke Janssen.  I play a priest.  My mom goes, “Are you in a horror movie?  Are you going to have soup coming out of your ears?”  No, mom.  I’m actually playing the moral compass.  I’m a fucking man of collar.  I’m not a big religious guy, but it was so much fun to find out what that guy was like.  I’ve got that one coming out and we are shooting Goon 2 next year.  I loved the first one.  I had so much fun doing Goon.  I’m on Crossing Lines.  It’s on NBC.  Check it out.  They only did ten shows last year but they picked it up for a second season.  I did the last two.