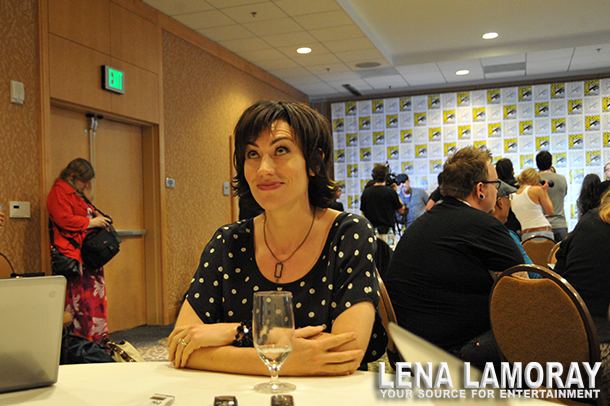 Maggie Siff:  Staying alive.  That’s my challenge this year.  Well, the character starts out in prison and so her challenge is – she’s really figuring out how to keep her children safe and how to create a kind of an exit strategy for them.  She’s also looking at a potential – she starts out in prison but then there is a trial at which her future will be determined.  That will determine whether or not she goes back to prison, so that’s another trial that she has to face.  I would say the two main ones are trying to keep herself out of prison and trying to keep her children safe and giving them a way out of the life.

Looking back and questioning Tara’s choices:

Maggie Siff:  I think she’s probably had a lot of moments like that along the way.  I actually would say that she has spent the last four seasons confronting moments like that.  I think that she is beyond regret.  I think now she’s like all right, fuck all, I have to figure this shit out.  I have to get my kids out of here and figure out a way to keep them safe.  It’s not about me anymore.  I think she’s post regret.  That’s the thing, when you have kids you can’t regret the circumstances that led you to where you are because that un-births them, which is not something she would ever want to do.  I also believe that the love story between them is true.  It’s hard to regret that.

Roughest thing in the past five season:

Maggie Siff:  I guess the two things that jump out at me are when the character lost the use of her hands and then at the end of last season going to prison.  I feel like those two moments are sort of like when me as the actor was like oh, this is awful.  I felt so terrible for the character although kind of excited as the actor for the challenge.  Those are hard moments to pull of when you play a character for so many years and you are attached to all of their hopes and their dreams and their aspirations.  You are so intimate with them and then to have them be crushed in a moment, in an episode, in a script.  You get a script and you are like oh, my god.  I can’t be a doctor anymore when your whole character is based on that.  It’s sort of crushing but exciting.

Maggie Siff:  I think you’ll see a very adversarial relationship between Tara and Gemma this season mostly because my main focus is really about getting my kids out of Charming and Gemma’s main focus in the world is making sure that her son and her grandchildren never leave this club. To her, her family is the life of the club remaining intact in Charming – this impermeable circle around everything.  They are actually working in direct opposition to each other this season, so it’s not going to be a pretty relationship.

Someone this season that Tara becomes closer to:

Maggie Siff:  Unser becomes a real ally to her.  She spends the first part of the season really collecting allies. So Wendy is an ally, Unser is an ally, Ally Lowen (Robin Weigert) the lawyer is an ally, Margaret Murphy is the hospital is an ally, so she gets her little group of people who can help.  I think the most surprising is Unser because he’s always been a real patriot of Gemma’s.  We’ve had a couple of scenes over the course of the series where they, kind of, connect.  He’s the only kind of paternal figure around.  He’s not a crook, not a violent guy that has some wisdom and warmth so they find each other again.

Being able to switch up things:

Maggie Siff:  It’s exciting.  I think that’s one of the things that I was most excited about when the show first started.  I had a vague sense that the arc of the character would be real transformative.  It’s been really fun and pretty fascinating to sort of see this change in her because I don’t think that I fully understood how it could happen until it has.  Also this season I think what I particularly enjoy is that you see the character’s tactics become more like Gemma’s and you see her able to play within the rules of this world but her intention is still to get out.  It’s simultaneously who she’s always been and this darker side of herself has really emerged.

'Sex&Drugs&Rock&Roll' preview and Liner Notes: Dress Rehearsal
'Fargo' preview clip and Dressing For Fargo
'Sons of Anarchy' preview clip - Tension mounts as the club makes a bold move to finally get out of ...