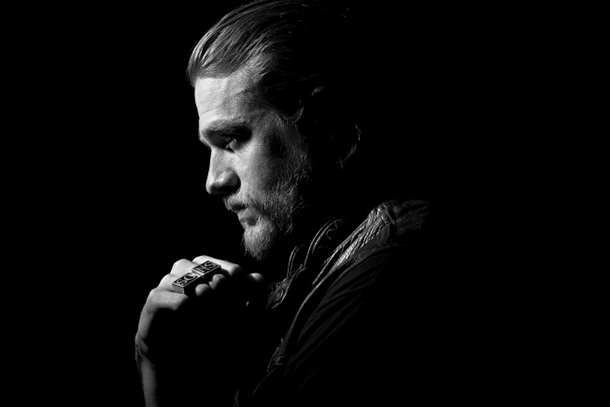 Sons of Anarchy is back this week with a premiere so unsettling that it will be the most talked about 90 minutes on television.  It visits one of the darkest places, but just hold your breath and let it go where it needs to go.  Cue The Seer from Vikings with a foreshadowing now you see moment.  “Straw” – As Jax continues to push the club into more legitimate businesses he can’t escape the sins of SAMCRO’s past.

When we were last in Charming, Tara (Maggie Siff) and Clay (Ron Perlman) were being led away, while Bobby (Mark Boone Junior) just walked away.  Everything was falling apart.

The season begins with Jax’s (Charlie Hunnam) thoughts on decisions and finding truth.  He wants to advise his sons on something that he knows all too well. Will Jax ever find or realize his own truth?  It hasn’t been an easy path for him to follow and the struggle is never ending.  Is there any way that Jax can be a father and a brother with the decisions that he is required to make?

Lee Toric (Donal Logue) continues his quest to hold SAMCRO accountable for his sister’s death.  Toric is seeking his own justice and he will do anything to get it.  He’s in pain; you can clearly see the overwhelming amount of suffering in his eyes.  The finale made his instability clear.  “Death is the only thing that puts life in perspective.” Donal Logue is positively brilliant as Toric.  I love that he plays a baddie in three of my favorite shows – Sons of Anarchy, Copper, and Vikings.  All of Donal’s recent characters have unleashed a web of chaos that will never be forgotten.  His performance steals the show.  Whether you love or hate the premiere, you will always remember that haunting look in Toric’s eyes. 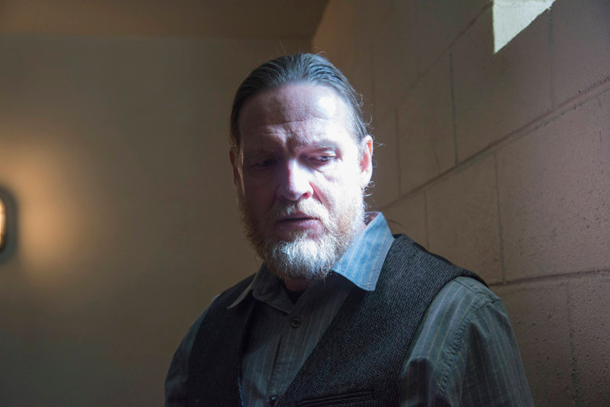 The big question is what happened to Otto’s (Kurt Sutter) tongue?  You know someone has it in a jar somewhere.  Let’s hope he can make it through these next two seasons without needing a piñata to store his sacrificed parts.  What else does he have to lose?

Tara tries to put on a brave front, but she’s torn up inside.  She doesn’t know what to do or who to trust.  Will she ever catch a break?  She has two beautiful children that she would give her life for.  Hopefully, it will not come to that but Maggie did say that “staying alive” was Tara’s biggest challenges this season.

A high point of this season is that we are going to see a lot of our favorite lawyer Ally Lowen (Robin Weigert).  Robin has always been fantastic, but she really shines this season.

Chibs (Tommy Flanagan) starts the season off right and demonstrates his no-holds-barred approach. He can say vile things but that accent really keeps it classy, at least in my mind.

You can say what you want about the club but when something happens to one of their own they instantly act on it.  Is it always the smartest option?  Of course not, but to them it’s the only option.  You have to respect them for that.  What they discover is sickening.

This season Peter Weller steps out from behind the camera to bring us Charles Barosky. Barosky is a crooked ex-cop that has his hand in several cookie jars.  Chibs and Tig (Kim Coates) find his business of choice hilarious, but they don’t let that stop them from sharing a very special moment.  I love seeing Tig happy and satisfied. 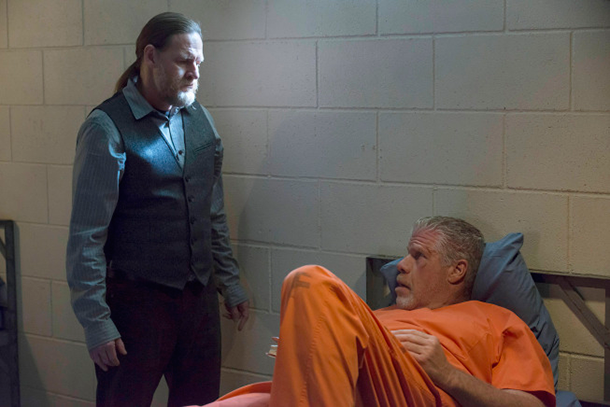 Colette Jane (Kim Dickens) also enters the picture this season.  She has ties to Barosky and is looking to expand.  Jax’s face when she asks him about one of his guys is priceless.

Gemma (Katey Sagal) reminds us exactly why we love her.  She knows how to make people squirm.  There are times when Gemma just speaks and acts for all women.  For that I want to say thank you, Gemma.

Poor Unser (Dayton Callie) isn’t thrilled with his loveable nickname, but it never gets old.  You can tell how lonely Wayne is and it’s heartbreaking.

Juice (Theo Rossi) is in a difficult place, but there is nothing he can do but accept it.  I miss doe-eyed Juice.  Do you remember him?

The events that occur in the premiere really set the tone for the season, and it’s a somber one.  Things are unraveling faster and faster.  What is it going to take to make the madness stop?  There are no easy answers.  The first episode alone is filled with intense conversations, questioning glances, and monumental depravity.  You do not want to miss this compelling episode.

Season six of Sons of Anarchy premieres Tuesday, September 10 at 10 only on FX.