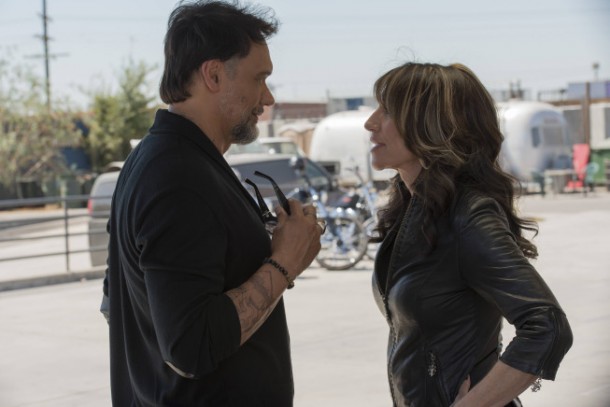 Was last week’s episode of Sons of Anarchy intense enough for you? Just when you start to get comfortable again another week of chaos presents itself. We haven’t signed on to watch the Sons of Knitting, so bring on the madness. Although, I’m sure knitting could get pretty ugly. All kidding aside, tonight’s episode puts everyone’s true colors on display. It’s a dirty, dirty world. “Huang Wu” – Jax woks to push the club forward but the Irish put another obstacle in his way. Directed by Billy Gierhart; Written by Kurt Sutter and Charles Murray.

Last week, Jax (Charlie Hunnam) found out the truth about Tara (Maggie Siff) and Unser (Dayton Callie) had to clean the seats in his home, thanks to Ally Lowen (Robin Weigert). With all that accent flying around there is no way in hell that Ms. Lowen left with clean drawers. She should have expected that due to her involvement with the club and what she was asked to do.

We were left with the image of Tara holding her son with a gun by her side. Where can she go from there? Nowhere a. Could she have another plan? Is there even another plan? Is she strong enough to fight or has she been broken down to the point of no return?

There is a lot of apologizing going on in Charming. Something has to keep the fabric from becoming completely unglued. 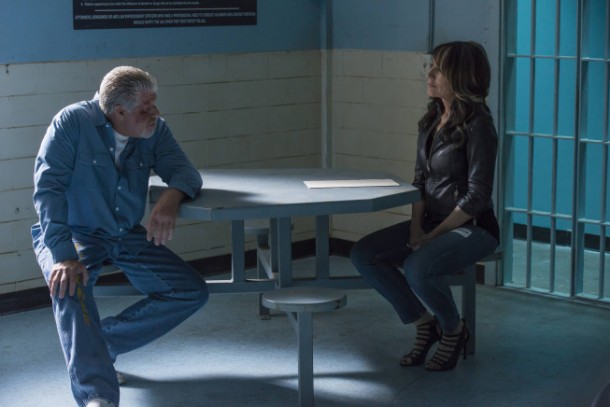 Clay (Ron Perlman) had a revelation last week. Ron’s performance was mesmerizing. As much as I despise Clay, it was nice to see him in action again. Even prison can’t hold Clay back.

Nero (Jimmy Smits) goes on an uncomfortable road trip but he owns the situation. He knows how to tear walls down. Nero earns some extra points for being a stand-up guy and enjoying the finer things in life like tea. You have to love a guy that will drink a cup of tea with you. Can you say cameo in American Horror Story: Coven as a tea party guest? Spalding (Denis O’Hare) would love him.

Gemma (Katey Sagal) wins at just being Gemma. Her wit is unmatched. Katey delivers some of the best lines tonight. After everything that she has been through she has never lost herself. She may have lost her way but never her light. That is the true beauty of Gemma and Sagal. One could not exist without the other.

One of the scariest things in tonight’s episode is about “stuff.” It does come with a short-lived bright side, so you have that to look forward to.

Galen (Timothy V. Murphy) has spent this season making sure that he isn’t on anyone’s Christmas card list. Timothy does a phenomenal job portraying someone so vile. Jax and Galen have to sort a few mixed messages out.

I like that Jax has been more open with The Club. Think of all the pain that Juice (Theo Rossi) could have saved himself if he came forward. The truth isn’t always the easiest to dish out but how people react to it may surprise you.

Tonight Tig (Kim Coates) puts his fashion foot forward, we find out who “the crazy looking one” is, and we learn what’s on Happy’s (David Labrava) playlist – maybe. All of that wrapped in love, hate, betrayal, and violence. While I don’t condone violence, sometimes you just have to sit back and let it happen. Enjoy “Huang Wu.”