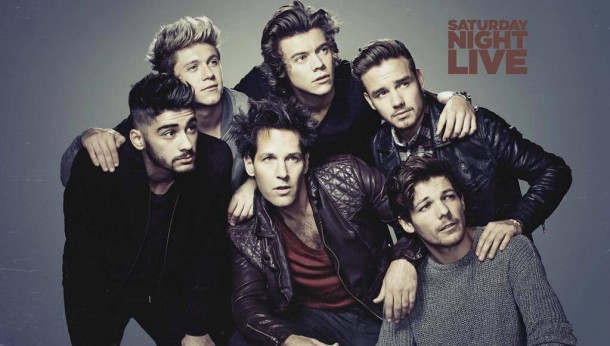 As if a collective fangirling over Paul Rudd and One Direction wasn’t enough, this weekend’s Saturday Night Live treated us to several cameos from old friends of the show. Check below for highlights from Rudd, Will Ferrell, David Koechner, Kristen Wiig, and Fred Armisen, plus two performances and sketch work by One Direction.

In this condensed version of The Sound of Music Live, Captain von Trapp introduces his children, including Dooneese, to their new governess Maria.

One Direction: Story of My Life

Musical guest One Direction performs “Story of My Life.”

Catch up on the headlines with Weekend Update anchors Seth Meyers and Cecily Strong, including a potential milk price increase and a fire started by a dog.

Seth welcomes his podiatrist’s son, Jacob, to speak about the traditions of Hanukkah.

At the unveiling of David, the model must explain Michelangelo’s rendering of his body to his date and onlookers

White Christmas is the first Black holiday movie for a white audience.

Santa stops by the elves’ workshop with a new look and new Mrs. Claus

On a lonely night, a woman waxes nostalgic about past lovers and is reminded of a forgotten hookup with an airport Sbarro employee.

One Direction: Through The Dark

Musical guest One Direction performs “Through The Dark.”

Four salesmen gather at a Chuck E Cheese to drink and exchange stories about the legendary Bill Brasky.