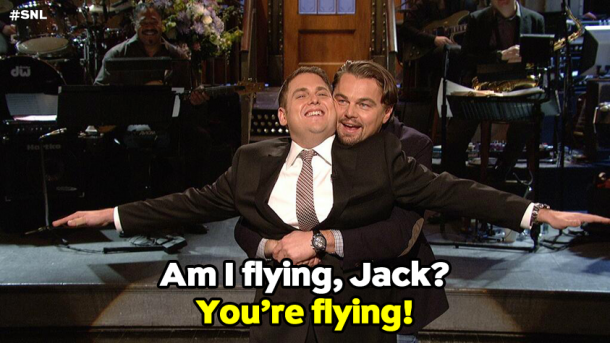 Jonah Hill hosted Saturday Night Live last night with musical guest Bastille and was joined by his The Wolf of Wall Street costar Leonardo DiCaprio. Find Hill’s *titanic* monologue below, along with Bastille’s performances of “Pompeii” and “Oblivion.”

Plus, the officer who arrested Justin Bieber (Kenan Thompson) visited Seth and Cecily at the Update desk to talk about the incident and old friend Olya Povlatsky (Kate McKinnon) dropped by to discuss the Sochi Olympics.

Six-year-old Adam Grossman makes some friends while out to dinner with his mother at Benihana.

A stakeout gets off track when the gang bangers get distracted by a beautiful snowfall.

A game show goes off course when one contestant refuses to admit to clogging the toilet.

Catch up on the headlines with Weekend Update anchors Seth Meyers and Cecily Strong, including Justin Bieber’s arrest and the new Oreo flavors

A dinner guest repeatedly embarrasses himself at his boss’ home.