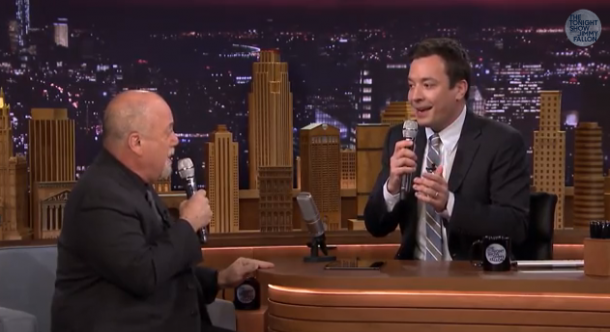 Jimmy and Billy Joel loop their voices on an iPad app to form a 2-man doo-wop group — singing “The Lion Sleeps Tonight” by The Tokens in 4-part harmony.

Billy Joel Is Getting His Own Radio Channel

Jimmy asks Billy about his plans for the upcoming Sirius XM Radio channel he will operate starting March 26, and the two talk about Billy playing in Russia in the Soviet Union in 1987.

Billy Joel: You May Be Right

Billy Joel and his band perform “You May Be Right” with some help from Jimmy Fallon.

Jimmy reads off superlatives for some of Russia and Ukraine’s top politicians, including “most likely to eat charcoal briquettes as a snack.”

Jimmy reads his favorite tweets with the hashtag #MakesMeMad. Part 1 of 2

Jimmy reads his favorite tweets with the hashtag #MakesMeMad. Part 2 of 2