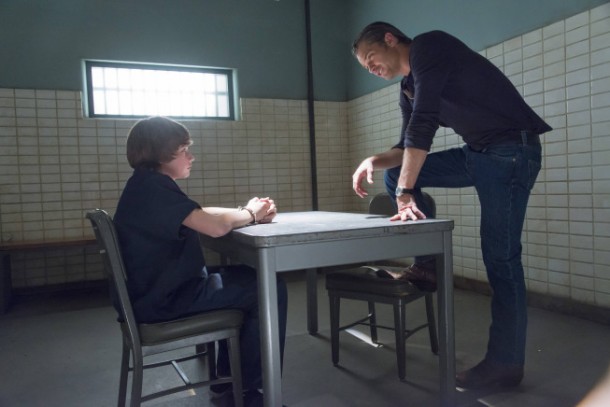 Tonight on the season five finale of Justified, a meticulously crafted conclusion is reached. This season has been phenomenal and it certainly ends on that note. It’s upsetting that we only have one more season to revel in the beautifully acted storytelling but the final season is sure to be monumental. “Restitution” –- Raylan has one shot at taking down Art’s would-be assassin, while cartel killers have Boyd’s back against the wall. Written by Fred Golan and Dave Andron; directed by Adam Arkin.

Last week, Raylan (Timothy Olyphant) pushed for Kendal Crowe (Jacob Loflan) to be charged as an adult. Will that decision have the desired effect or will it fail? You definitely want to have a copious amount of hot cocoa on hand for tonight’s journey.  Raylan’s talk with Kendal will take you back.

Raylan shocked Wendy (Alicia Witt) with the upgraded charges. What do you think she is going to do? Darryl makes victims out of everyone. That scene where he beat her was very hard to watch.

Darryl Crowe Jr. (Michael Rapaport) talks a lot of smack and makes a promise to Raylan that he plans on keeping. Michael Rapaport has made this season very enjoyable. He certainly knows how to play a horrible cousin. He wasn’t a very good cousin to David Caruso’s character in Kiss of Death either. Nothing will beat Dewey’s (Damon Herriman) face when he saw Darryl in the beginning of the season. Is Darryl an undercover romantic? His acknowledgement of the c word (no, not that) will make you think just maybe. No, he’s a horrible person with no redeeming qualities.

This was definitely the season of Dewey. Dewey set everything in motion. That poor trusting fool doesn’t know when to stop running his mouth. Maybe he finally met that third person that Raylan warned him about. Oh gosh, my love for Dewey knows no bounds. Turtle dog forever. How can you not root for Dewey?

Boyd got his phone back just in time to talk to Jimmy (Jesse Luken). We were left in suspense with a tearful Jimmy. Will Boyd be able to talk his way out of this one? “This is your moment.” Do you think Boyd picked up some more cigarettes? Picker’s (John Kapelos) death was one of the best of the series. Danny Crowe’s (AJ Buckley) was also noteworthy. Creatively killing off characters keeps things interesting. R.I.P. Chelsea.

Ava (Joelle Carter) has had a very difficult season in prison. Everything has taken a toll on her and she was crushed when Raylan told her that it was too late. Who has her back? Boyd didn’t turn out to be her smooth talking knight in shinning armor. What gives, Boyd?

One of tonight’s many highlights is when Tim (Jacob Pitts) gets an offer that he can’t refuse. Will he knock twice? Tim doesn’t miss his chance to exchange stories and pleasantries. At least we got to enjoy a bit of Tim’s charm this season. Tim and Boyd (Walton Goggins) playing Scrabble was a beautiful moment. 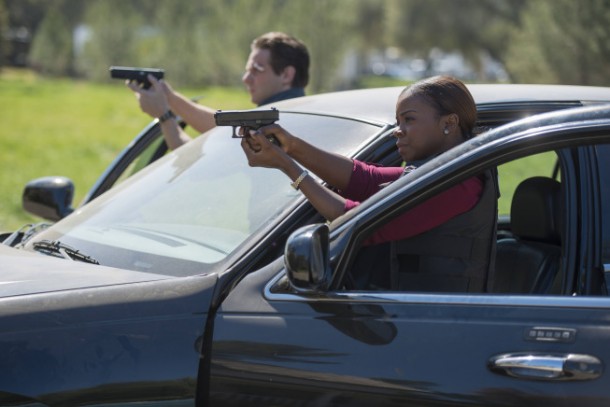 Rachel (Erica Tazel) and Tim work together perfectly and have some rules of their own that people must respect. Rachel has grown so much. I hope we get to see her really make a difference next season. Erica is an incredibly strong female lead that makes her presence known in the small amount of screen time that she usually gets.

Tonight’s episode takes you out in typical Justified fashion. It delivers like you wouldn’t believe. Waiting for next season is going to be the hardest part. Thank you to the stellar cast and writers that take us all along for the ride. Do not miss tonight’s season finale.