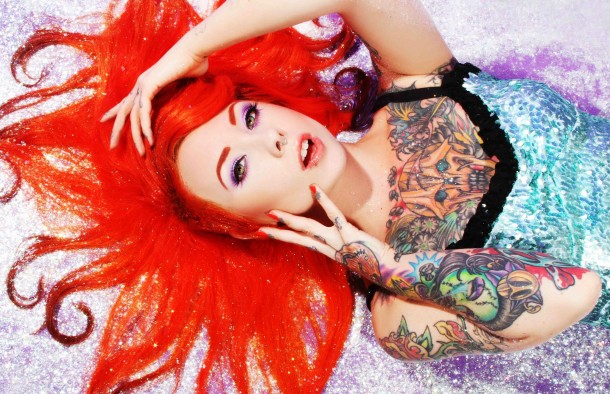 Lena:  I enjoyed the premiere of America’s Worst Tattoos. Your client with the “cannon” (looked like a penis with a nipple on it) was hilarious. You certainly improved the quality of his life.

Megan Massacre:  Definitely. That tattoo was horrible and I felt really bad because it was about his kids too and that is the most important thing that you can have a tattoo to commemorate, so it was pretty tragic. I’m glad we were able to do something that he liked and covered it up really well.

Lena:  Your biomechanical cover-up was incredible.

Megan Massacre:  Thanks. That was true that I hadn’t done it in like eight years. It’s just not something that I do. That was really what he wanted and I knew that I could do it if I really tried but I was a little nervous.

Lena:  You were reluctant to do it, but I think some of your best work comes out when you step outside of your comfort zone.

Megan Massacre:  Yeah, I agree. I like being pushed outside of my comfort zone. [Laughing] I do it on a regular basis.

Lena:  Your use of color in all of your work is unmatched. It’s absolutely beautiful. That is not easy.

Megan Massacre:  It definitely isn’t easy. I think we make it look easy.

Lena:  Can you talk about some of the worst tattoos that you’ve ever seen and if it’s difficult for you to look at a tattoo without picking it apart?

Megan Massacre:  I can’t look at a tattoo and just see a tattoo, usually. I look at a tattoo and I see line work and shading, color and dimensions—I see it all. It’s hard to not pick it apart. As for bad tattoos—I see all kinds, especially since doing the show. People are just reaching out to me left and right trying to get me to help them with their bad tattoos, which I don’t mind at all—I love helping people. I would say that the most common bad tattoos that you see are usually mistakes that people make when they are drunk. Either they were drunk or maybe they found out that their artist was drunk a little too late, until after tattoo was done. Maybe they were just too young and didn’t know better and were just excited to get a tattoo and just went to the first place and picked something off the wall. Maybe they didn’t have a lot of money and got a budget tattoo. Any tattoo that’s on sale usually isn’t going to be very good. Anything that commemorates a girlfriend or boyfriend that you are not with anymore is a huge mistake that people make.

Lena:  It’s one thing if people are on the show and know that they have bad tattoos, but how about the people that show you their tattoos that think they are awesome. 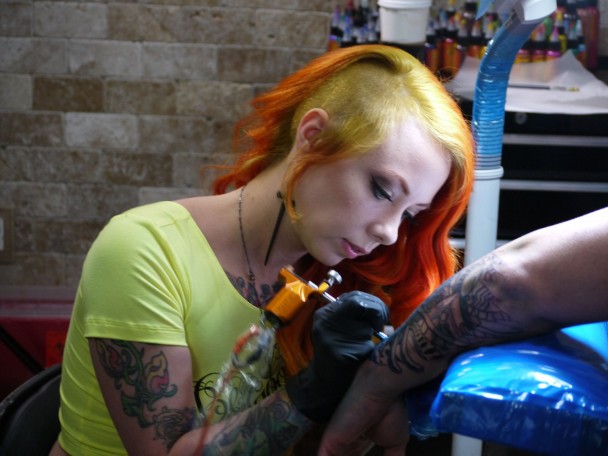 Megan Massacre:  That’s pretty common. I think it’s slightly less common now that people are beginning to be educated on tattoos, but it’s still pretty prevalent. People will see me in public and they want to talk about tattoos and they want to show me their tattoos. People love their tattoos whether they are good or bad, usually. It’s hard for me sometimes when people tell me that they have the sickest tattoos and that they had the sickest artists do it, and it was only $50. They go on and on about all this good stuff and they show it to me and it’s one of the worst things that I’ve ever seen. Of course, I don’t want to be rude and say it’s horrible because they are going to get really upset because it’s not like they are saying that your shirt is horrible—they can change their shirt. You are saying that something that is very permanent is horrible. A lot of times I just say, “Yeah, that is really something.”  [Laughing] Or come up with a phrase where I’m not saying it’s good but I’m not saying it’s bad either. Just say something and let them interpret it the way they want to.

Lena:  That’s what I was wondering because how could you respond to that without dying too much inside? [Laughing]

Megan Massacre:  I mean, I die a lot inside. [Laughing] I just learned to keep it behind-the-scenes. I learned to just keep a smile on, unless somebody specifically comes up to me and asked me to give them my honest criticism, I don’t go out of my way to say anything negative.

Lena:  What can you say about the rest of the season? Can you give some highlights?

Megan Massacre:  Obviously, some really bad tattoos and some really big transformations. They definitely went really out of their way to find me some of the absolute worst and hardest tattoos to cover-up that they could find. I was cursing the producers out ninety percent of the time. I would question how I’m even supposed to do this cover-up. I didn’t even think it was possible. They would be like, “You have a day to do it so…” They would always put me in these really stressful situations but fortunately they were all able to be covered-up. There are some really funny ones. There are faces that I covered with other faces. I actually got a cover-up done on this season, so you get to see me at both ends where I’m doing the tattoos and I’m getting a tattoo. You can see how horribly I sit for tattoos. [Laughing] The truth is, I can relate to all these people. Anybody who has a lot of tattoos always has a couple of bad ones—even tattoo artist. When we start out tattooing we have no idea what we are doing. It takes time to learn, not only how to tattoo, but what a good tattoo is. As tattoo artists, we look back years later and think, “Oh wow, I shouldn’t have gotten these first tattoos.” I’ve had to laser a couple off and had a couple covered-up at this point. That’s why when I’m talking to people I’m not judging them. I’m not like, “Oh my god, how could you get that?” I get it. I’ve been there.

Lena:  Out of all of the artists, who do you think had the worst tattoos to work with?

Megan Massacre:  Tim. That’s just because I always subject him to the worst ones. We used to work in Philly together and he was doing cover-ups back then. That was before people were even realizing that their tattoos were bad. He doesn’t just cover- up a tattoo, he literally transforms it into another completely different thing. I honestly don’t even know how he does it sometimes. He’s literally a tattoo magician, not a tattoo artist. [Laughing] They ways he finds to hide these things is really remarkable. That’s why I’m really excited to have him on the show with me. Anything that’s extra, extra difficult or extra big, because he’s also really fast—I always push him for that one.

Lena:  You get to choose?

Megan Massacre:  Not really. They ask my advice sometimes on the show. Who do I think would be good or they just show me the tattoos and ask what I think. I’ll just give them my honest opinion.

Lena:  It has to be a lot more difficult to do a cover-up?

Megan Massacre:  It’s a lot harder, infinitely harder. It really depends on the cover-up itself because every single one is different. There are even things that can’t be covered.  Not every tattoo can be covered. It has to do with how old the tattoo is. Even though you might have the big, black tribal tattoo that looks like it would be hard to cover-up, if it’s ten years or older, it’s not actually as dark as it looks. It’s a lot easier to cover-up. If you have something that is really fresh, like you got it that year, for the first three years it’s harder to cover-up because the ink is still dark and fresh.

Lena:  Wasn’t the joke always about having to get a black panther? [Laughing]

Lena:  They give you about a day to work out the artwork?

Megan Massacre:  Sometimes they give us a day, or if I throw a big enough hissy fit, I can sometimes get two or three days. [Laughing] Of course the way TV works; everything needed to be done yesterday. 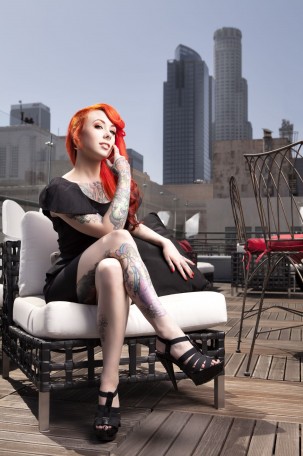 Lena:  Don’t you wish everything could be wrapped up in thirty minutes in real-life?

Megan Massacre:  Yes. That’s a big thing. People only see a few minutes of every tattoo. I think it gives people the wrong idea about how long tattoos take, but there are definitely tattoos on the show that look like I sat down and did it in ten minutes, but in reality it was over three sessions at six hours a piece. There is a lot of time that goes in to a good tattoo.

Lena:  Do you have any Letz Massacre tour plans?

Megan Massacre:  No, I don’t actually. We get asked about that a lot. We were doing it a lot and Combichrist, Joey’s band, didn’t go on tour for a couple of years and now they just decided to go back on tour. That makes him really busy. He’s gone for three months, and I’m sad and lonely. [Laughing] I’ve also been filming a lot for the show that’s on now, so with our schedules it’s been almost impossible to do. I’m hoping that once things calm down that we are able to work on that more. I would love that.

Lena:  What do you think about Joey’s tattoos?

Megan Massacre:  Joey has really bad tattoos—really awful. He’s got like a unicorn humping a dolphin. It’s really big on his arms and it’s done like really bad. I feel really bad saying that because I think a friend of his actually did a bunch of his tattoos when they were younger and the guy is super nice, but the tattoo is just awful. He asked me if I could make it look better and I was like no, you have to get laser tattoo removal. Joey actually has a really cool tattoo on his chest. He has about five unicorn tattoos. He’s got a giant penis tattoo on his leg.

Lena:  That’s my favorite. If anyone can pull off a penis with wings tattoo, it’s Joey. [Laughing]

Megan Massacre:  Yeah, it’s not weird that he has that. [Laughing] He’s got all these weird tattoos on him. I only did one. I tattooed his hand. There is a cat with an upside down cross on his head. I actually really like that one. I have to say that it’s probably the best tattoo that he has.