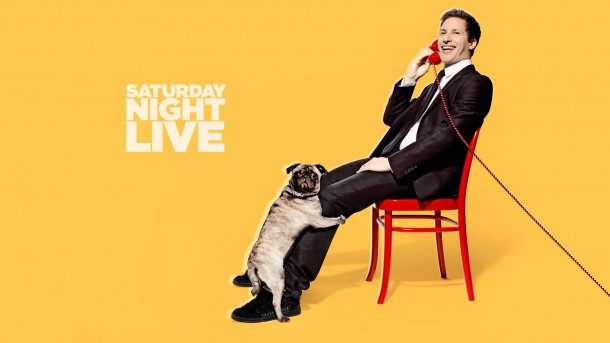 Andy Samberg returned to host Saturday Night Live’s Season 39 finale along with musical guest St. Vincent who performed “Digital Witness” and “Birth in Reverse” off her self-titled album. All the highlights can be found below. Plus, be sure to watch the web exclusive cologne ad and Kenan Thompson’s Magic Johnson impression during Weekend Update in dress rehearsal.

In his first turn as a Saturday Night Live host, Andy Samberg receives well wishes from Justin Timberlake and attempts to break Bill Hader’s record for number of impressions. Guests include Seth Meyers and Bill Hader.

Digital Short: When Will The Bass Drop?

Weekend Update: Get in the Cage

Colin welcomes Nicolas Cage (Andy Samberg) back to the show for his Peabody award-winning segment, “Get in the Cage,” where he sits down with fellow thespians – in this case, Paul Rudd – to discuss their work.

The Lonely Island (Andy Samberg, Jorma Taccone, Akiva Schaffer) returns – and partners with Pharrell Williams – to teach women everywhere that just because a man hugs you, doesn’t mean he’s into you. Guest appearances include Pharrell Williams and Maya Rudolph as Oprah.

There’s no woman, or dog, that can resist the scent of Testicules, the only cologne for a man’s genitals.