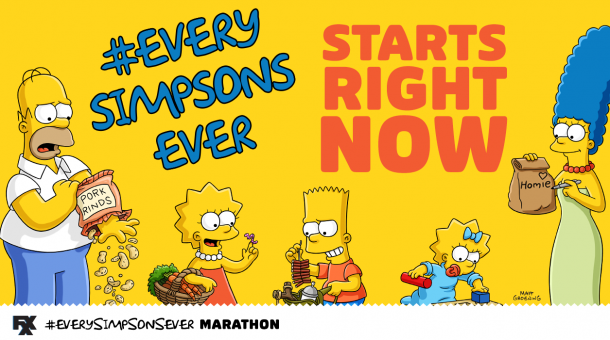 For 24 Hours a Day for 12 days, FXX Will Air All 552 Episodes of The Simpsons (through Season 25) as well as The Simpsons Movie in Chronological Order

WHAT: FXX Network will launch a record-breaking marathon of The Simpsons series and The Simpsons Movie Thursday, August 21, 2014 in celebration of its landmark acquisition of the exclusive cable and authenticated non-linear VOD rights to the legendary animated comedy. For 24 hours a day, over the course of 12 days, FXX will air all 552 episodes of The Simpsons (through Season 25) as well as The Simpsons Movie (airing after episode 400), in chronological order.

WHEN: The marathon will begin today, Thursday, August 21, 2014 at 10 AM ET/PT and will conclude September 1, 2014 at 12 AM ET/PT, making it the longest-running marathon in television history.

WHERE: Only on FXX (Check local listings and GetFXX.com for channel information)

SOCIAL: In “The Simpsons Greatest. Live. Tweet. Ever.,” @EverySimpsons will be live tweeting all 552 episodes and the movie 24 hours a day, for 12 days straight. Fans and viewers can participate in the marathon by taking the

Users will be able to unlock stickers after reaching various milestones at episodes 1, 25, 50, 100, 200, 300, 400 and 552, along with a hand drawn piece for The Simpsons Movie. Participants will be entered to win one of these milestone stickers in a 24” vinyl format.

Viewers can also engage in the marathon anytime through series trivia, character infographics and daily “Duff Hour” celebrations via Twitter and Facebook:

The Simpsons writers, including Al Jean (@AlJean), Matt Selman (@MattSelman) and Mike Prince (@MikePriceinLA), will be tweeting along at various times during the marathon.