AND YOU’RE THE WORST

September 9th Return for Seventh and Final Season of Hit Comedy The League, Followed By the Second Season of the Critically Acclaimed Comedy You’re The Worst

Twitter Pitch: Get excited! The seventh and final season of @TheLeagueFXX and the second season of @YTWFXX premiere on September 9th, starting at 10pm on FXX!

FXX is the destination for comedy this fall with the seventh and final season of its hit comedy series The League and the second season of the acclaimed comedy You’re The Worst, it was announced today by Chuck Saftler, President of Program Strategy and COO, FX Networks. Season seven of The League will premiere on FXX on Wednesday, September 9th at 10 PM e/p, immediately followed by the second season of You’re The Worst at 10:30 PM e/p. 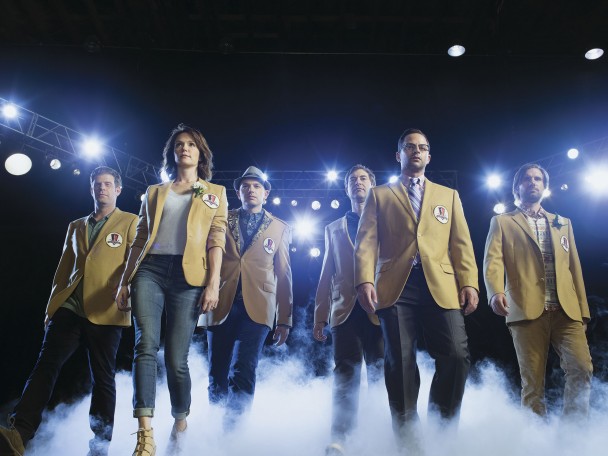 To be a fan of FXX’s The League, you don’t need to know much about fantasy football, or sports at all. You just need to have friends that you hate. The ensemble comedy follows a group of old friends in a fantasy football league who care very deeply … about beating each other for bragging rights.

The League was created by the husband-and-wife team of Jeff Schaffer (Curb Your Enthusiasm, Seinfeld) and Jackie Marcus Schaffer (Disturbia, Eurotrip) who serve as executive producers and directors. The series is produced by FX Productions.

The League features an ensemble cast of rising actors/comedians. Stephen Rannazzisi (Paul Blart: Mall Cop) is “Kevin,” a happily married father and commissioner of the league. Katie Aselton (The Sea of Trees) plays “Jenny,” Kevin’s wife and his better half – especially when it comes to Fantasy Football. Mark Duplass (Togetherness) plays “Pete,” the perennial league champ who is struggling to become an adult. Jon Lajoie (Let’s Be Cops) is “Taco,” Kevin’s little brother, a part-time musician and full-time stoner with little interest in fantasy other than hanging with his buddies (whom he struggles to remember). Nick Kroll (Kroll Show) plays “Ruxin,” who believes he is the smartest of the group but can’t figure out how exactly the other guys are screwing him over. “Andre,” played by Paul Scheer (Wet Hot American Summer: First Day of Camp), has continued to be the punching bag of the group since their high school days – a fact that hasn’t changed despite the fact he is now a successful plastic surgeon.

You’re The Worst is a modern look at love and happiness told through the eyes of two people who haven’t been very successful with either. It’s the story of Gretchen and Jimmy, fear, heartbreak, romance, sex, food, Los Angeles, Sunday Funday, friendship, and the fact that sometimes the worst people make the best partners.

An original comedy from writer and executive producer Stephen Falk, You’re The Worst puts a dark twist on the romantic comedy genre. Narcissistic, brash, and self-destructive Jimmy Shive-Overly, (Chris Geere), has inadvertently found himself paired up with cynical, people-pleasing, and stubborn Gretchen Cutler (Aya Cash). After a whirlwind courtship that culminates in Gretchen burning her apartment down with a faulty “back massager,” she and Jimmy are forced to take their relationship to the next level by moving in together (which neither of them are particularly thrilled about). Now they must learn how to live with each other when they can barely live with themselves.

Rounding out the cast is Desmin Borges, who plays Edgar Quintero, Jimmy’s once homeless, war veteran roommate who’s on a mission to redefine his relationship with Jimmy; and Kether Donohue as Lindsay Jillian, Gretchen’s best friend and former partner in crime who’s now struggling to find her identity after being dumped by her “lame, soft” husband.

You’re The Worst is produced by FX Productions.

FXX is the new basic cable entertainment network from FX Networks which launched on September 2, 2013. Geared towards a young adult audience, the schedule features original series, movies, and acquired series. The channel is anchored by the acclaimed hit comedies It’s Always Sunny in Philadelphia, The League, You’re the Worst, Man Seeking Woman and the upcoming The Untitled Tracy Morgan Project (TBD). FXX is also the exclusive cable home to The Simpsons, the longest-running comedy in TV history, the late night animated block Animation Domination, and acquired hit series such as In Living Color, Mad About You and Parks and Recreation. FXX is carried in more than 78 million homes. FXX and its sister channels FX and FXM comprise FX Networks, a business unit of 21 Century Fox.