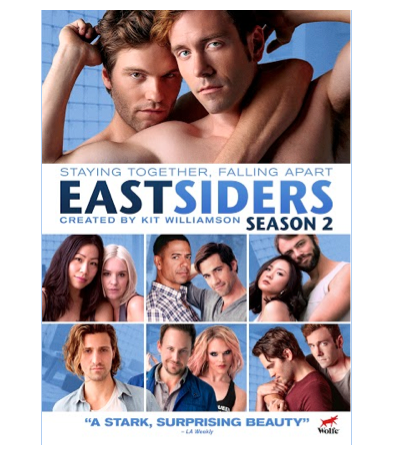 The second season of EastSiders is being called funnier than the first, but also tackles some very dark topics, from heartbreak to infidelity to STDS. This season Cal and Thom’s relationship heat up as they explore opening things up sexually and complications of dating an ex are explored.

Since its debut, the show has leapt across several different viewing platforms, appearing first on YouTube, then LogoTV.com, a subsidiary of Viacom. The feature film version of the series aired on Logo’s cable network, and was then distributed on DVD and digital platforms through Wolfe Video. Today, September 15, the second season of EastSiders will premiere on Vimeo On Demand. Wolfe will release the series on DVD and across additional digital platforms beginning November 3.

EastSiders explores the drunken outbursts and double standards of twenty-somethings living and loving in Silverlake, CA. The series has won several awards including Best Web Drama from LA Weekly Web Awards and the Indie Series Award for Best Ensemble. It received a Satellite Award nomination from the International Press Academy.

EastSiders Season One is available on www.EastsidersTheSeries.com.