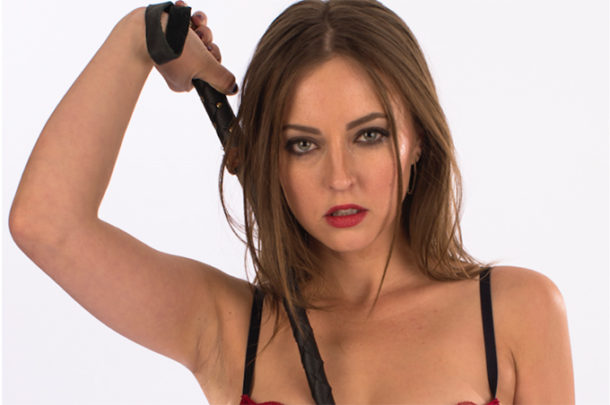 Lena: Your work on Hannibal was phenomenal.

Katharine Isabelle: Thank you. Hannibal was the greatest show. I loved that show so much.

Lena: Your scenes with Michael Pitt were very intense.

Katharine Isabelle: He was great. That whole show was so beautiful and so dear to my heart.

Lena: It’s a bummer that they cancelled it. I hope that you got to keep a few things from Margot’s wardrobe.

Katharine Isabelle: I know. That’s a bummer. No, I didn’t. You can buy the stuff for half of what production pays for it, but I was billionaire. [Laughs] I was like, so that tank top is still $800. [Laughs] I could have gotten a steal of a deal for like $9,000, but I decided to just let them go.

Katharine Isabelle: I loved Jewel, Ennis, and Jonas—everyone was so funny.

Lena: I just want to know how you managed to keep everything together without laughing? [Laughs]

Katharine Isabelle: [Laughs] That was difficult. My character, fortunately, could be more amused by the whole situation, so I didn’t have to be so straight faced the entire time. I could totally crack up and laugh at people, which helps because it’s difficult when you have like eight of the funniest people that you’ve ever met in a room, in their underwear, being absolutely ridiculous. You’d hear people from behind the camera, sort of, choke laughing and trying to be quiet.

Lena: It’s definitely a good first date movie because it will really get the party started.

Katharine Isabelle: I would think so. It, sort of, breaks the ice once you’ve gone through all that awkwardness sitting next to someone. I don’t think that the rest of the night would be all that bad. [Laughs]

Lena: Who would you recommend the movie to?

Katharine Isabelle: Everybody, anybody really that has a sense of humor. [Laughs] As long as you have a sense of humor, the movie is probably for you. I wouldn’t necessarily recommend it to my Mormon family, but everyone else see it.

Lena: The title of the film definitely speaks for itself.

Katharine Isabelle: I think so. I don’t think you should be too shocked if you go to the theater and see what you see, knowing the title of the film.

Lena: It would be a difficult thing to plan.

Lena: In your opinion, do you think that they went about planning it in the right way? I loved the list. [Laughs]

Katharine Isabelle: I think that there are lists and rules to adhere to. [Laughs] I think there’s creativity being moved around. I think that’s what you would want to do—get everyone in a room and try to discuss things and see where it goes.

Lena: You play Cassie’s (Jewel Staite) best friend Alice. She comes to Alice for some help because apparently Alice is like Liam Neeson in the Taken films. She has a certain set of skills.

Katharine Isabelle: She does have a certain set of skills. [Laughs] I think she’s vastly more experienced than the rest of the people in Beaver’s Ridge. That’s why Cassie goes to her. She’s the most experienced and the most open to doing this. She thinks it’s absolutely hysterical that all these squares that they’ve all known from childhood are going to try to do this together. I loved my character. I just got to sit back and laugh at everybody. She’s awesome.

Lena: How would you describe her?

Lena: Do you have some favorite scenes?

Katharine Isabelle: I liked everything with Kristian Bruun. I think his character is so sweet. I liked the stuff with him and Alice. I don’t know, all of it. There are sweet scenes, funny scenes, and awkward scenes. I think anytime that you can watch a movie where eight of your good friends are acting like idiot—that just makes me so happy. It makes me happy to be a part of it. I like when Ennis puts his shoes on, when he’s naked, at the door. It’s just the best.

We had so much fun shooting all of it and the very last scene where we run out down the street, we were all actually naked. We had all the socks and privacy bits and then we had a shot of tequila and we were like fuck that, let’s just go. It was pretty fun. We were going to get in trouble. The city knew what we were going to do and said that we couldn’t do it and if they caught us, they would throw us all out. We did it anyway. 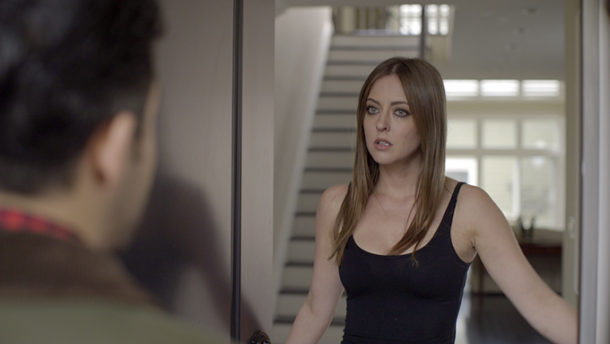 Lena: Are they going to watch the film?

Lena: That face montage did me in. It was so funny. James McGowan, who played Spencer, made me lose it every single time.

Katharine Isabelle: He’s the greatest. We all had a crush on him.

Lena: I don’t know how anyone could keep a straight face when he did anything.

Katharine Isabelle: I’m not the greatest actor, so I’ll laugh. I just had to turn my head and occupy myself with something else like my hair, or something. There’s a lot of me just looking at the tips of my hair in the movie. I was trying to occupy myself so I didn’t laugh and ruin everything.

Lena: Were there any pranks that went on during filming? Any jokes?

Katharine Isabelle: The whole thing was a giant joke, I think. We would sit down in the green room, where there were tarps everywhere for us to sit on. We would all be in our various robes in various shades of undress and the eight of us would be on a group chat just killing each other. We would just be tearing each other apart—it was super funny. There were no real pranks. It was just constant witty banter and insults. It was good times. 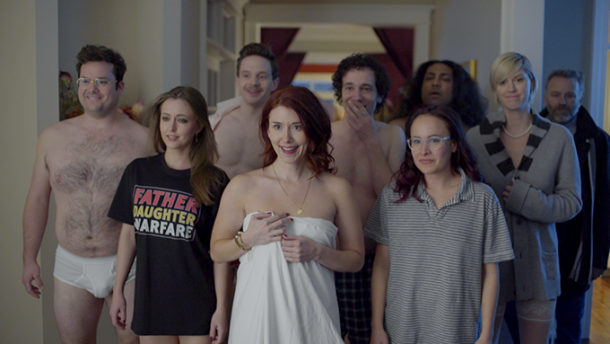 Lena: We really need a sequel. A bit of a where are they now piece.

Lena: Moving ahead several years, where do you think they would be?

Katharine Isabelle: I am going on a crazy around the world trip with my brother. When I come back, I’m going to be shooting a movie in Ireland. I love Ireland, so that will be really fun.

Lena: You also have a beautiful horse.

Katharine Isabelle: I actually have a couple of beautiful horses that are rescues. They are amusing and they are everything to me. I love them.

Lena: I saw a picture of one of them and he had a hairdo.

Katharine Isabelle: Yeah, my boy horse has Fraggle Rock hair. I love him. I’m terribly allergic to them, so I wear masks around them. It’s really funny because not everyone understands it.

Lena: He’s so sweet looking. I saw the picture on Instagram.

Katharine Isabelle: I just started Instagram to document the travels that my brother and I are going to have coming up and hopefully a project that I will put together in a concrete form when we get back from the trip. It’s TheKatharineIsabelleProject on Instagram. https://www.instagram.com/thekatharineisabelleproject