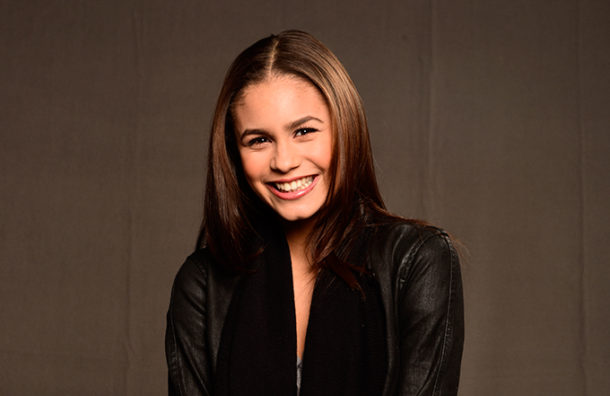 LL: You went from a Spielberg series to an Oprah series. Good for you.

Desiree Ross: Yes, I did. It’s actually kind of crazy. I never would have thought that I would be doing this right now.

LL: I’m assuming that Greenleaf is a pretty different show for you compared to filming Falling Skies.

Desiree Ross: It is. Falling Skies was really fun because I got to be a villain and that was my first recurring arc. Greenleaf is my first series regular role. It’s completely different. I’m not dealing with aliens. I’m dealing with more real-world situations. It’s a pretty great show.

LL: Congratulations on it already being picked up for another season ahead of the premiere.

Desiree Ross: I’m already wondering what the scripts are going to look like. I keep on imagining different scenarios and playing them out in my head. I’m already ready for it. I’m counting down the days.

LL: Did you have your final audition in front of Oprah?

Desiree Ross: I didn’t. My audition story is actually, kind of, crazy. I was about to sign a contract for a test deal with Nickelodeon to be the lead in a new Nickelodeon show. My agents let me know that they got me this audition for a new series called Greenleaf where I would be playing the lead’s daughter. They thought I was perfect for the role. I sent in a video audition and I was about to sign the contract for the test deal, but we put off on sending it back. After a few days, my agents called me and said that Oprah called casting and said that she loved me and wanted me for the role. The only issue was that I had to get approved by Lionsgate because I jumped the line with the audition. They were, kind of, hesitant on offering me the role because I had only done one three-minute audition. They really didn’t have enough to base it off of and they hadn’t really auditioned anybody else. The next day, after trying to get the best deal, I just got offered a contract with Lionsgate and OWN for the role of Sophia. I never planned on getting offered two amazing deals at the same time. I was freaking out. What if I picked the wrong one? My career could go downhill. I was freaking out and everyone was trying to calm me down. That’s my long story for that one.

LL: You are so young and you definitely have a very long career ahead of you.

Desiree Ross: Oh, I hope so. That’s the goal.

LL: What was the best thing about filming in Atlanta?

Desiree Ross: I’m close to home. With the Nickelodeon one I would have been in Toronto. Atlanta is only four hours away from my family, so I could just drive back home whenever I wanted to—like on weekends and stuff. I’m from a small city and we only have one good mall, and it doesn’t even have Nordstrom or anything. When I was in Atlanta, they have everything. They have so many different events. It’s such a big city compared to where I’m from. There is so much more to do and being in the same city for sixteen years, it gets boring and I loved switching it up. Atlanta was a nice change and if I got homesick I could just drive home. It was, kind of, a luxury for me since most of the cast had family in L.A. and that’s where they were going home to.

LL: What was it like working with Oprah and the rest of the cast?

Desiree Ross: Don’t even get me started. They are amazing. [Laughing.] I was so intimidated working with them. Every day I would have to go in and make sure that I had all my lines down. I would be so embarrassed if I ever forgot a line. I learned a lot and Oprah, I’m pretty sure that you guys are probably wondering the most about her, she’s just like you see on TV. Having any kind of conversation with her I have to watch my words so carefully, not because she’s going to judge me but it’s Oprah Winfrey. Everything that she says has so much meaning to it and I don’t even know if she means to, but even in private conversations with her, my eyes are glued on her just trying to soak in every single word of what she says. Her acting is great. Everything about her is amazing. Merle [Dandridge], who plays my mom Grace in the show, was incredible. She helped me a lot—getting into character and loosening up. She’s an incredibly hard worker. I have a lot of respect for her. Everyone on the set has been a role model to me. I can’t wait to do season two.

LL: That’s so good to hear. Oprah needs to hire you to write a fashion column for her magazine. You have amazing fashion sense.

Desiree Ross: Thank you. The only problem is that I see all these cute clothes that I like and then I look at the prices and I can’t afford that. How do you keep things cute and keep it affordable? [That would be a perfect column. You have to respect the person that can look fashionable on a budget.] I gave away most of my clothes in December because I grew out of most of them. My style completely changed and now I have nothing. I’m trying to rebuild my wardrobe.

LL: Your prom dress was perfection.

Desiree Ross: Thank you. I’m not really into conventional prom dress type of stuff. I don’t like the glitter and all of that. I wore a For Love & Lemons gown that I found in Atlanta. I was so excited because I had no clue what to wear to prom night.

Desiree Ross: Everybody where I live wears basically the same thing. It’s like southern prep style, which is basically a whole bunch of Polo Ralph Lauren, Jack Rogers, and colorful shorts—it’s just the same thing. That’s the only thing that I have a pet peeve about. Literally, everybody where I live wears the exact same things. I walked around a college campus where I live and everybody looked identical. It freaked me out. What I like is diversity. I don’t like everybody following the same trend. I like people wearing different things that are unique to their fashion sense and not just going with the flow of what everybody else is doing. I don’t think it’s unique. I give them props if they can switch it up.

LL: I definitely agree with you.

LL: Greenleaf is having a two-night premiere on June 21st and 22nd on OWN.

Desiree Ross: Yes. After that it’s going to be shown on Wednesdays on OWN at 10pm.

LL: You play Sophia Greenleaf. She is the daughter of Grace. Grace has returned home after twenty years following the mysterious death of her sister, Faith. Can you talk more about what the show is all about?

LL: Is it going to be Sophia’s first time meeting her family?

Desiree Ross: It is. She has been in Phoenix, Arizona for her whole life. Her mom has kept her away because she disapproved of everything that they were about.

LL: Is the reason why she left going to play into the storyline?

Desiree Ross: It kind of does. It has a lot to do with Faith. Once you watch the show, you’ll see more about why Grace left. That’s one of the things that comes up.

LL: What can you say about the premiere that will get people excited?

Desiree Ross: I’ve only seen episode one. There is a very long table scene that people can look out for. It was the first day that everybody was working together and that everybody met each other. It was our very first day of filming and I think it had at least twelve cast members. It was like the Greenleaf family. It was a thirteen-page scene. You can just imagine how long that is. It took us over a day to film it. We film an hour-long episode in seven working days, but this one took us almost two to just film that one scene. You have to watch it and you’ll see all of the issues coming up in the beginning of the episode, but when the table scene happens everybody is bashing on each other. You find out the different reasons why there are family members that don’t like each other. In the beginning, you don’t really know but at the dinner table—it’s really powerful. When we were first shown the scene I felt my heartbeat racing, I was shaking. I don’t even know why but I was holding my breath. It was because of how crazy it was. Lynn Whitfield’s acting and Merle, and just everybody that was there—it was so intense when we were filming it. Lovie [Simone] and I would have to leave in the middle of the scene, but we would go into the other room and we would act like each of the other characters, and say their lines to each other. The different crewmembers, that were watching us, were laughing and we were trying so hard not to laugh so we wouldn’t mess up the scene. It was the funniest thing. That’s one of our inside jokes. We knew the whole scene because of how long it took to film it.

What else happens in the first episode? Oprah happens. Oprah is in the first episode and that’s when everybody clapped at Tribeca. They were building up the suspense because they knew that everybody would be watching looking for Oprah. They played it out and then she came in and it was awesome. The premiere leaves a lot of suspense for the next episode. I think the reason why they are doing the three-episode premiere is because everyone likes to binge-watch shows, which I think will be good because it will be a good hook in. I’m excited to see it and don’t want to wait. I want to see to the thirteenth already.

Greenleaf premiers on June 21st and 22nd on OWN.