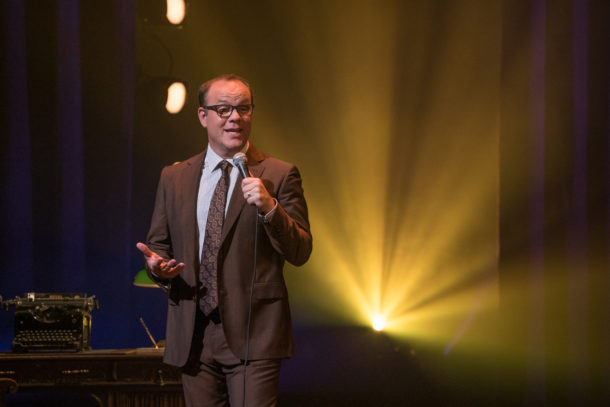 Friday night at 8/7c on EPIX, don’t miss the premiere of Tom Papa’s latest stand-up special. Tom Papa: Human Mule is a one hour comedy special that was filmed at the Hanna Theater at the Playhouse Square in Cleveland, Ohio in July 2016. Papa returned to one of his favorite cities to showcase a hilarious fresh take on some of his favorite themes including everyman struggles of family life, falling behind to the super rich and the challenges of life in our country today.

A regular on Late Night TV, Tom Papa tours theaters internationally, is host of the hit podcast and Sirius XM show, Come to Papa, and has been seen in numerous TV and film roles. Tom Papa: Human Mule is Papa’s second EPIX comedy special. Tom Papa: Freaked Out, directed by Rob Zombie, premiered on the network in 2013.

With more than 20 years as a stand-up comedian, Papa is one of the top comedic voices in the country and has found success in film, television and radio as well as on the live stage. On the small screen, Papa was seen alongside Clive Owen in two episodes of The Knick, he co-starred with Michael Douglas and Matt Damon in Behind The Candelabra, and he guest starred on The Jim Gaffigan Show and Inside Amy Schumer. He was seen in Chris Rock’s film, Top Five, he starred opposite Matt Damon in the Steven Soderbergh film, The Informant, and he appeared in Analyze That opposite Robert DeNiro.